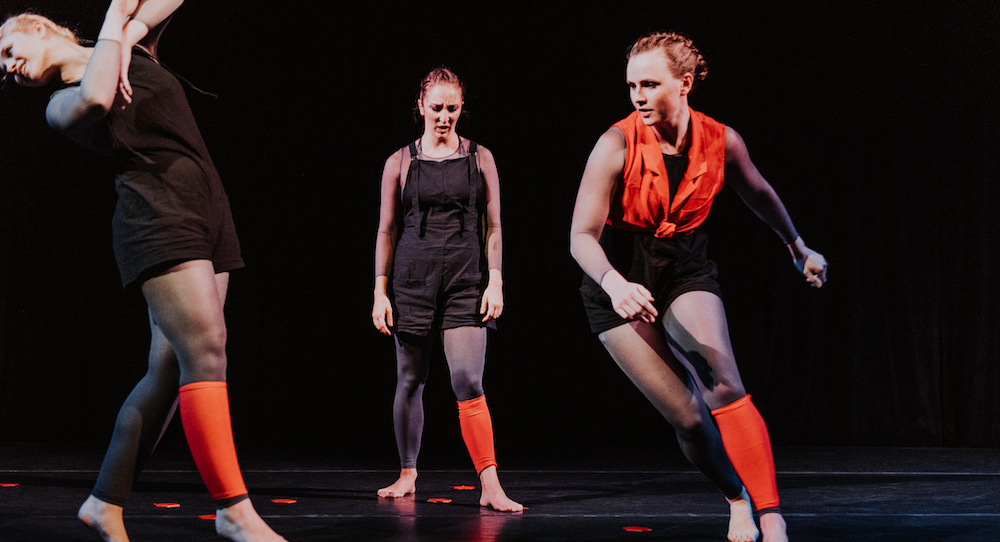 Some of the best art leaves open room for interpretation – not enough so to lack direction, but enough to offer audience members a few paths down which they can travel. It presents questions without prescribing an absolutely “correct” answer. Luminarium Dance’s Hiveland, choreographed by Artistic Directors Merli V. Guerra and Kimberleigh A. Holman, exemplifies such art. Although certain aspects on structural and movement phrasework levels could be ironed out, the work overall was thoughtfully constructed, thought-provoking and aesthetically compelling. I could see the Boston-based company’s mission in action; “Luminarium is more than a dance company. … It is a think tank, a museum, a gallery for contemporary dance and for contemporary ideas,” (luminariumdance.org); the work delved into big ideas and explored exciting territory. 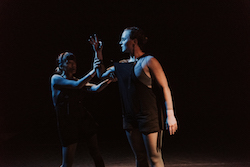 Mystery hung heavy in the air from the first lights shining, the first notes ringing out and the first movements. A clump of dancers, dressed in black, stood off stage. They circled their torsos with arms reaching up overhead. At other times, they reached in various directions, as if searching. Lovely gestural work became expansive through moving in multiple planes in space; for instance, one arm reached up high while the other reached forward at shoulder height – a manipulated fourth-position port de bras. A theme of fall-and-recover, of losing control and then regaining it, also became evident.

One light shone from offstage right, bringing the feeling that the dancers might not be able to really see that for which they searched. The music (from composer Christos Zevos) was just atonal enough to contribute to this air of mystery, while stopping short of being ear-grating. Just as mysterious, a six-sided shape dropped in from above, to land downstage center. This shape seemed to have an inexplicable power; the dancers seemed simultaneously fearful of it and drawn to it.

They danced, and every so often, one performer would draw closer to the shape, creeping closer in intrigued yet fearful hesitation. A section of partner work followed. The pair of dancers were committed and fearless, yet the movement lacked the ease and depth of nuance elsewhere in the piece.

Finally, one dancer stepped inside of the shape. She was not harmed, nor suddenly lacking self-control, nor suddenly experiencing any other negative effect. I wondered if more could have been made of this moment, dramatically speaking, considering the mysterious tension built around this shape. In any case, she stepped out, and the action of dancing continued. 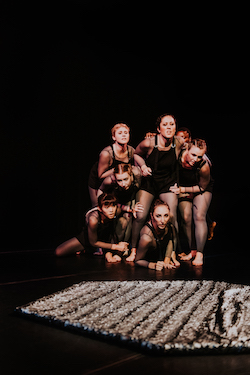 The group clusters around Amy Mastrangelo. Photo by Nicole Tomaselli.

A striking image that followed was one dancer holding a hand over the center of the shape whilst running, like a horse in a thriller film merry-go-round. Then, another dancer rose above her, circling arms as if creating a halo – an angel overhead. While I’m not quite sure how this moment fit into the overall atmosphere and mystery around this six-sided shape, it was a beautiful image and moment of harmony.

As the action continued, the shape seemed to gain power; suddenly a dancer was drawn to it but couldn’t penetrate the space above the shape on the floor. Then, the dancers tried to push one another away from the space to get closer themselves – setting in place a pack mentality “one-ups-manship” that would be a predominant theme in the remainder of the piece. The iconic novel Lord of the Flies, which dives into the human desire for power and conquest when we co-exist in groups, came to mind for me. After this pushing and fighting for dominance, the dancers dispersed to clumps upstage.

These clumps became lines, and lines became smaller groups that traveled across the stage in diagonals. The transitions between formations were as compelling and seamless as the phrasework – a smooth stirring-together of turns, extensions and footwork. Arabesque leaps became à la seconde turns, landing in a deep second position plié. The dancers were so commanding, and the movement so compelling, that this section made me want more sections with this type of virtuosity in the work (although it was by no means the only such section, only perhaps the most memorable).

Another intriguing element at play here was the use of small red dots, in a six-sided shape – just the same as the larger shape. The dancers spread these dots around the space at various points. I wondered if these represented some sort of energy or feeling, some other mysterious meaning, or were just an aesthetic addition. A similar aspect was the red shin guard-like costume additions, which the dancers somehow put on by stepping through the hexagon shape (which, at that point, had black cloth draped over it). One interpretation is, this six-sided shape being one part of a honeycomb in a beehive, all elements in the work were coming together to create a world of this beehive – hence, the title, Hiveland. 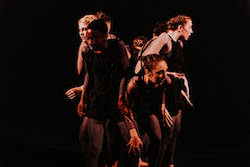 Yet all of these elements seemed fairly open to other interpretations. Audience members could bring their own imagination, interests and fears to the work. The music, movement, lighting and props – all of these elements had the potential to enliven those imaginings, thoughts and feelings. New layers of mystery were on display with each new section. One section with such a clear new layer of mystery was a duet, one taking place primarily on the ground – making it much lower than much of the dancing in the piece. One dancer draped herself over the back of her partner, and they rolled in a ball. Pure movement and the laws of physics seemed to be the most meaningful aspects at play here.

There were also more personal moments such as fixing each other’s hair and clothing – some of which became humorous. This made me crave more moments of humor and heart in the work, yet perhaps that wasn’t its atmospheric and emotional weight. An intriguing trio section followed this duet, bringing that pack mentality “power-play” feeling. At one point, a dancer had her foot on another dancer’s back, who was folded forward with a rounded spine. As she stacked her spine up, the dancer with her foot on her back had a higher and higher développé grow. As it got to the extent of her stability and flexibility, she landed that foot down to take a strong second position plié.

At another point, two dancers forced a third dancer’s foot on a red dot, and she couldn’t take that foot off it. Her movement here evoked finding expression and expansion amidst constriction. Other group sections occurred, with an additional red clothing items – different variations of vests and shirts. The individuality in these clothing pieces was refreshing, given the general lack of individualization of the separate dancers in the work.

Yet one dancer never put on a red clothing item. At one point, all of the other dancers gathered around her – not seeming violent but certainly feeling threatening. This moment spoke to the isolation, and the becoming threatening to a majority group, inherent in the experience of being an outsider. Soon came more impressive, striking unison sections – again, making me want more of this virtuosity in the work. Nuanced gesture met strength in a phrase of bending into plié and pushing the palms forward. 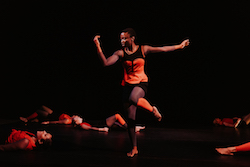 Jennifer Roberts (soloist) amidst the company. Photo by Nicole Tomaselli.

The fall and recover of the beginning returned with movement such as an arabesque that cantilevered forward until coming off balance, to then return to balance as dancers pliéd into the landing.

This action wound down as dancers gathered at upstage right, around the pentagon shape, which had re-emerged, draped in black cloth. The dancers reached in to come out with blue armbands. A bit of action commenced, and then the lights went down. I was left with many questions, and wanted time in the work with the dancers wearing these armbands to potentially answer those questions.

Perhaps the goal here was a sense of continuity, that such action would continue in this group of dancers – whomever they may be or whatever they may represent. As with the rest of the work, perhaps parts of the approach could be reconsidered, yet – all in all – the aesthetics and big ideas at play left me intrigued. I had questions, rather than prescribed answers. Art capable of leaving audiences in that state has us continuing to search for the answers ourselves, and life becomes all the more intriguing.