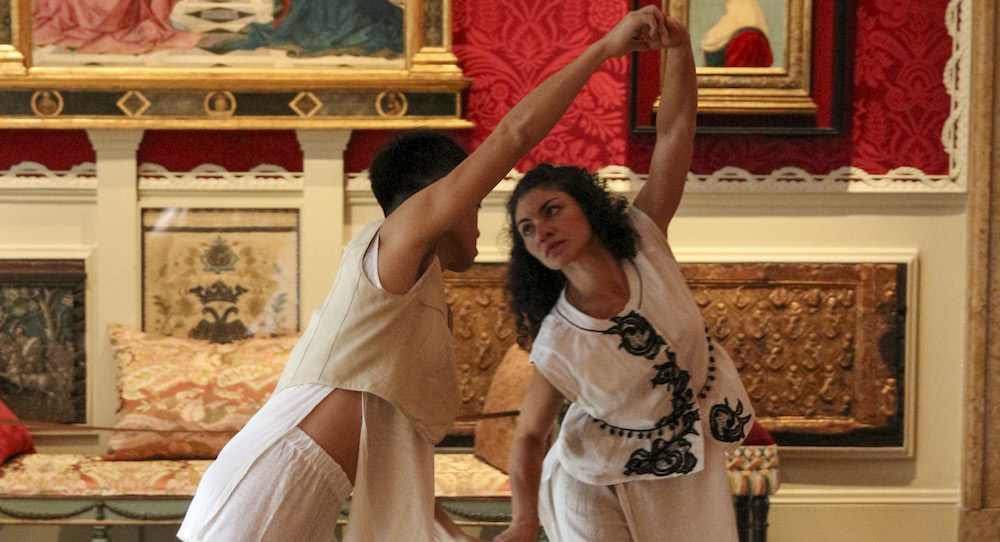 In our frenetic 2018 western-culture lives, how often do we stop to appreciate true beauty? Urban life in particular can lead us to feel disconnected from the pure aesthetically pleasing. The site of Public Displays of Motion’s Small Visitations in a Near Empty Room, at Boston’s Isabella Stewart Gardner Museum, offered the perfect space for which to explore beauty in motion. The work was performed in the Calderwood Gallery, with several floors of seating rising above a ground floor where the dancers performed. This offered a unique way to view a performance, which, along with other elements in the work, surfaced the idea of perspective, how we see action unfolding in front of us and the larger world around us. The program explained how Peter DiMuro, choreographer (in collaboration with company dancers) and founder/artistic director of Public Displays of Motion, created the work “with partial inspiration [from] the aftermath of the infamous theft of 13 works of art in 1990. Though elements are missing, what remains is still beautiful, and becomes newly beautiful, differently beautiful.” This review focuses on a similar theme, seen and perceived before reading that program note. 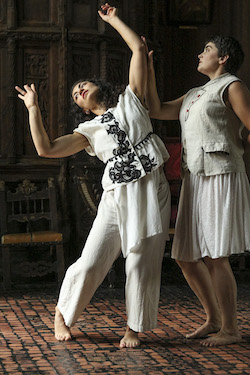 The work began in near darkness, the only light streaming in through door frames leading into the gallery room. This beginning was the seed of this idea of beauty in perspective. A few dancers walked in with what looked like enormous lightbulbs, framed with what seemed to be thin rice paper (designed by Brooke Stanton). The light from these lamps brought the space into greater focus, and dancers taking places was just barely visible. More light came up, and we in the audience could now see that dancers rested under large, long draped cloths running diagonally across the space, creating an “x” shape. Dancers began to move in small and slow ways, shifting hips and reaching an arm a bit further. A singer, mezzo-soprano Rena Harms, walked in. A few string instruments accompanied her singing (music composition by Beau Kenyon). It was powerful yet in a way subdued, raw yet also with a kind of pleasing refinement.

Along with the alternating sharp chords and lilts of the string accompaniment, the music was both chilling and beautiful. Soon cast members at the side pulled away the drapes, and the dancers began to move with a bit more size and speed. Some rolled onto their back, while others rolled to curl into a ball on their side. Eventually, one by one, dancers rose. They began to shift their gaze from internally to externally focused, coming to look outward with an air of curiosity. They wore white tops and slacks with elegant yet simple cuts, in a fabric that moved with the nuances of the choreography (designed by Heidi Henderson). Once all dancers were standing, one by one some began to pick up speed, moving with clarity yet ease – like a spoon moving briskly through a thick batter. The lighting again shifted to come from a single diagonal, changing the way our eyes took in the performers and the stage. 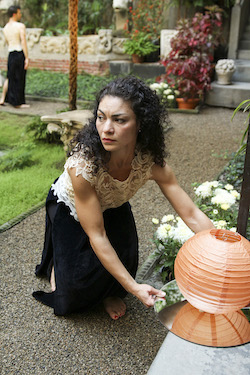 The dancers’ white costumes took on the shade of the lighting moving across their body (lighting design from Stephen Petrilli), allowing them to be canvasses for the color on stage – just as they were for DiMuro’s wonderfully multi-directional, multi-level movement. The singer wore black, further distinguishing her from the dancers. Jumping notes from the piano also underscored the energetic action onstage. It was all a feast of sound, movement, color and light. Further duet and trio sections commenced. DiMuro demonstrated a true talent for bringing out his dancers’ strengths in ways that complimented the group as a whole. At certain points, DiMuro himself – with a truly commanding presence – walked through, making hand motions as if shaping the action on stage. There was a sense of him being like the Wizard in The Wizard of Oz. He didn’t have any interactions with dancers on stage; pay no attention to the man in the long coat.

The dancers had varied bodies, movement styles and technical capabilities. This diversity was evident, yet not distracting or discordant, even in unison sections. One such unison section, with a larger group of dancers on stage, brought another compelling lighting choice — dancers lit such that their shadows fell behind them. The lines of dancers were spaced such that every shadow seemed to have its own space, and the stage picture was compellingly clean and neat. It was pleasing to the eye, the mind, and the heart. One arm swooped down in a deep second-position plié, leading to a turn and low arabesque. Crossed wrists added a gestural element. This movement was just as neat and clear as those formations, but also dynamic and enticing. 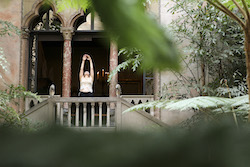 Much of the cast exited to leave three dancers. Michael Winward offered a memorable solo, his movement incredibly committed yet beautifully refined and understated. Soon the whole cast returned, yet in different costumes – black rather than white. While no overt meaning from this change seemed clear, aesthetically it was all pleasing and compelling. Also pleasing and compelling were these changes of the number of dancers on stage, making significant changes in whom we saw and how their dancing affected the light shining across the stage. After a unison section, with more of DiMuro’s clear yet daring movement, lighting changed again to make stripes across the stage.

All lights eventually lowered, and the lamps returned – the work thus ending how it began. The singing and music also faded down, and where there was truly something for both the eyes and ears, there was no longer anything. The sights and sounds still truly resonated, however. Perspective is a joining of the senses and the mind, and beauty can resonate in both long after it is experienced. In today’s world, the former as a concept feels underappreciated, and the latter is in too short of supply in today’s world. Art can do something about both of those unfortunate truths.