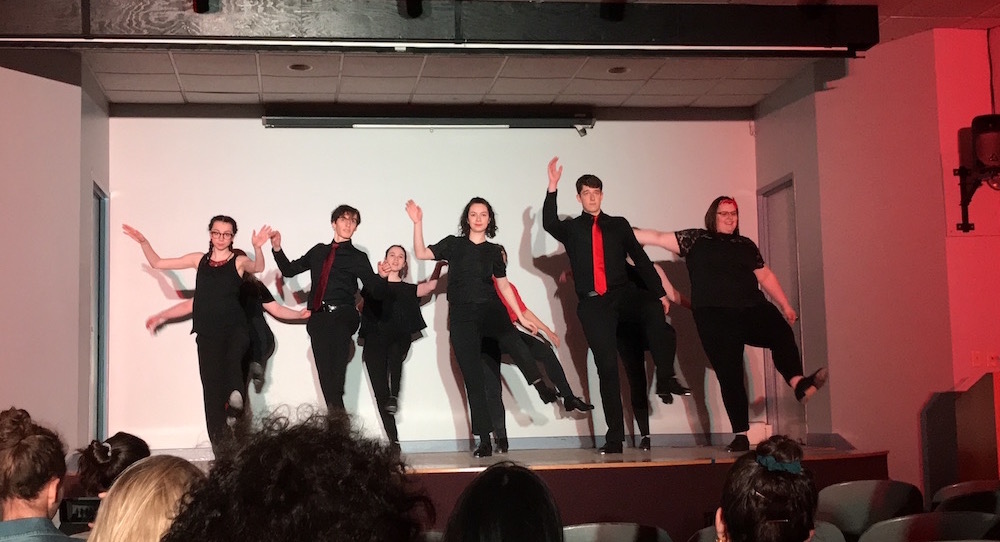 Some have certainly voiced the question if tap dance is still relevant and fully alive, as the shifts and changes of society and the arts in turn shift and change the dance that is viable and supported. Fred Astaire in Singin’ in the Rain will always be honored and treasured. Yet intractable questions and anxieties lead many artists to contemporary dance styles and methods, and audiences follow suit.

Despite these trends, shows such as Boston University (BU) Dance Theater’s BU on Tap demonstrate that tap is still very much alive, offering joy, a sense of rhythmic physicality, inventiveness and so much more. The involvement of other college dance programs also demonstrated a spirit of teamwork that made the show all the more diverse, vibrant and intriguing.

Sixth in the program, All I Know Is from BU Dance Theater, began with a slow and crisp rhythm. Drag and stomp was repeated, accenting and timing changed with separate repetitions. The rhythm picked up speed but stayed as crisp. Traditional tap steps were given intrigue with moments such as dragging toe behind to shift into low attitude. Formations were also compelling, such as two dancers in opposition to one on the other side of the stage. They switched sides, and the action wound down. The lights dimmed. But my toes were still tapping in my chair.

Dynamite from Step About Boston offered an Irish Step Dance hard-shoe feel, with lifted energy and still torsos. Much of the footwork was in that style as well. It was to pop music, however – certainly not typical for Irish Step! The beats, rhythm and joyful quality of the music and movement perfectly matched – so, for me, it totally worked! Their sounds and lines were clean.

Soon they split from lines into duets, and the partners switched places front and back. Another moment that wasn’t common in this style, but was enjoyable and well-executed nonetheless, was all dancers swooping one arm up and over go to another dancers shoulder, all facing offstage left – a conga line! They did some crisp footwork here to separate into another formation. It all went to show that Irish dance doesn’t have to be with traditional dress, music and big curly wigs (as lovely as those things are!).

In BU On Tap’s Blue Mance, pairs started facing the back. In turn, one half of the pairs “flap”-stomped to face the side, then front. They did call-and-response phrases, demonstrating this essential method in tap history and education. An impressive moment was traveling around in a circle by toe-heeling, the sounds quick and clean. The audience cheered. From there, they traveled to seamlessly end up in new pairs. The piece overall both joyous and intriguing.

Another fun aspect of the show was the hostess, who introduced every number with a little joke applying to the piece coming up next. This can help audience members (or at least helped me) to keep track of the numbers rolling out, which can be difficult to do in dance shows with many different pieces.

There were also “Paper Plate Awards” to acknowledge audience members in different ways – the youngest in attendance, “best dressed”, the audience member who had traveled the farthest, the biggest Boston University Dance Theater fan, et cetera. This was another way to keep the audience engaged, as well as show gratitude to audience members for coming to the show.

Best of All from Touche Taps had a very fun Latin-rhythm feel. Arms were often in diagonals or in straight line, with more engagement than in many other pieces. Yet there were fewer formation shifts than in many other pieces, something that could have added to what the piece could offer. Yet a dynamic feel remained through movement that shifted side-to-side and various ways to “tap turn” (heel-toe, cramp-roll, shuffle, and more).

The dancers were also expansive and courageous in their movement. A memorable moment was lines in window boxes shifting, so that the dancers switched windows. To end, they pencil-turned to bring one arm up and step together and then bow – an inventive way of ending the piece with a bang and a bow all together.

Water Fountain from Harvard Taps brought dancers in spring colored cardigan and slacks or dresses. There was a joyful feel of spring finally here (with it being a sunny, warm day in Boston, when it’s still felt like winter on many days in the city). They cleanly executed some difficult steps, such as toe stands into one quick side-shuffle on left and right.

Later in the piece, there were toe stands with the other leg crossing over, all in cannon with different dancers. Call-and-response made another appearance, such as with quick shuffles to face in towards each other. Other percussive elements came in snaps and claps. The rhythm was clean and catchy. With the Carribean-style music, there was a “hey, come party!”-vibe. It brought me right in!

The last piece, Shim Sham, brought the whole BU on Tap group back. It was immediately a feast of sound, with fast footwork and arm movements to follow. Some pausing might have made this speed more enjoyable and meaningful. Nevertheless, the complex phrases were thrilling to watch. Pick-ups into toe stands, followed by crisp shuffle-stomps, flashed before my eyes and left me awed.

They moved into an “improv” circle, paying homage to that other key tap tradition. They traveled into lines and then hit poses on alternating levels. It was a fun and compelling end to a fun and compelling show. It was so clear – tap is alive, vibrant and oh so very dynamic!