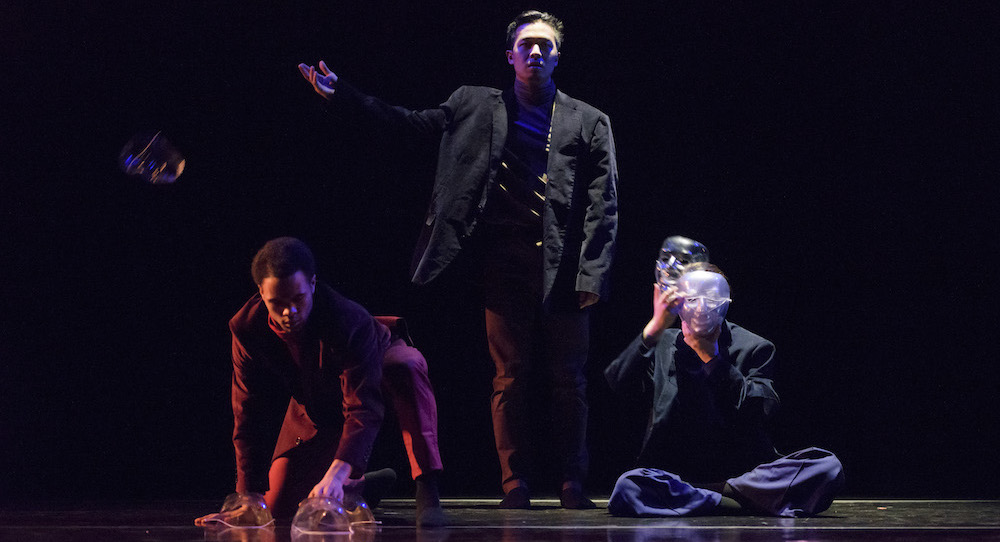 Dance can dazzle our eyes, make our feet move in our seats and get right into our skin. Sometimes, it can make us laugh. Sometimes, it can make us really think. In The Harvard Dance Project’s Spring 2018 Performances, all of this was on the table for all to enjoy – particularly that challenge to think about the subject at hand. The show was a three-part bill, all premieres by guest choreographers. Harvard students, including some alumni, danced the works.

The night began with a pre-show talk with the three choreographers. This type of thing is usually a post-show “Q and A”, so this was evidently a rather unique approach. I wondered what audience members could knowledgeably ask before seeing the works. Yet the discussion moderator asked questions in a way that led to intriguing reveals, enough for audience members to pose questions that piqued everyone’s interest further. We were definitely ready for the show to start! 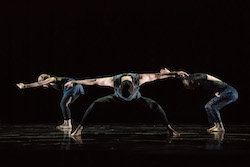 The Harvard Dance Project in ‘WILL’, choreographed by Shamel Pitts. Photo by Liza Voll Photography.

The first work, Will by Shamel Pitts, played off the metaphor of “wearing many hats”. The program notes described Pitts’s inspiration for the piece of feeling apprehensive and anxious about taking on more roles, more responsibility in his professional life. The dancers wore wide-brimmed hats at the beginning and end of the piece. The use of the hat to convey the metaphor could have been clearer: did he overcome the apprehension, the hats thrown aside? Was the fear still present, even with the hats thrown aside? They did return. All of this wasn’t fully clear.

That being said, the movement was luscious, spacious and very well constructed. The dancers began facing the back, moving slowly and deliberately. One by one, they broke out into individual movement. This movement very evidently capitalized on each dancer’s strengths, yet somehow all fit in cohesively together. They began to run in different patterns, and fall and recover. This high-energy wound down into smaller and more subtle movement. It felt like discovery in the calm after the storm. 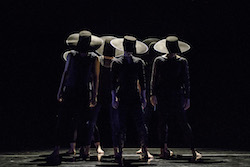 The Harvard Dance Project in ‘WILL’, choreographed by Shamel Pitts. Photo by Liza Voll Photography.

A few other moments and images were particularly memorable. A couple of times, a dancer lay, face down, on the belly of a fellow dancer. They moved their limbs to creep, with smooth agility, around in a circle. Eight limbs, and this creeping quality, evoked a spider. It was visually fascinating, and meaningful in the sense of uncontrollable unfolding actions – in watching a spider move and in when one wears many different “hats”.

These spider qualities re-emerged with “crab walks” – walking on hands and feet, with the chest upward. These walks also connected with a sense of youth, and the dependency that comes with it, along with moments of curling up in a fetal position. To end, the dancers put the hats back on and again faced the back. Whatever the clarity of Pitts’s intention, this returning to the image that started the work brought a feeling of the ongoing struggle of balancing the “many hats” that we often come to wear. 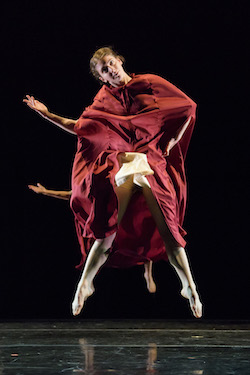 The second work on the bill, PUBLIC/private by Chanel DaSilva, was more overtly socio-politically in tone and content, and powerfully so. It began with a male dancer, standing in full powerful presence. He wore a double-breasted black suit. Playing through the theater was the infamous Access Hollywood tape of President Donald Trump boasting about grabbing women by their private parts, “and when you’re a star, they let you do it,” Billy Bush laughing along. The air in the theater immediately became heavy.

Joining this dancer, one by one, was an ensemble of female dancers – strong yet graceful. They wore red capes, echoing The Handmaid’s Tale. Chillingly, sequences in which he asserted power over their bodies ensued; he pulled and pushed them, flung them over his back, turned them at their shoulders. I was chilled down to my bones. I was also glad to read in the program a disclaimer that the work contained imagery and content that may be triggering for survivors of sexual violence, and that a mental health professional was available in the lobby for anyone who may have needed it. 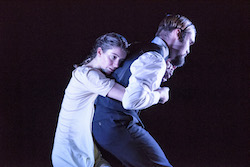 A ensemble section of strong dancing from these dancers followed. They multiple-turned, battemented high, and reached across themselves and forward with outstretched hands – energy through every finger. At the same time, a freedom and accentuation of the hips underscored their femininity. Despite the abuse, the disregard for their dignity, the objectification, they were still strong and stalwart.

Ending the work, one of the female dancers and the male dancer faced each other, both spotlit. The Access Hollywood tape played again. The lights came down. One might argue that this ending simplistically framed the #metoo, #timesup sociopolitical context as a battle between the genders (which, in truth, it’s not). Yet I very much appreciated the courageous, well-constructed focus on such a timely, important issue. 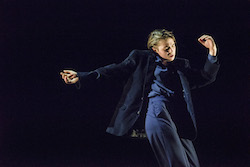 The Harvard Dance Project in ‘Fitting Out’, choreographed by Peter Chu. Photo by Liza Voll Photography.

The last piece, Fitting Out by Peter Chu, was more atmospheric in nature, but no less striking and thought-provoking. It started with a single lamp lit on downstage left. In silence, other dancers joined. They passed cones back and forth, quickly but calmly crawling on all fours and lunging back and forth. This emulated Three-Card Monty, bringing a sense of gambling on chance. The action also created a score, through the cupping sound of plastic. They crawled off one by one, with impressive physical grace, like animals for whom it’s perfectly natural.

Music came up to usher in a second section – “The First Time I Ever Saw Your Face” by Timmy Thomas. One dancer sat on a chair and circled his torso. Other dancers entered and made hopping movements, creating a feeling of vibration. There was a harmony to this vibrating energy. A following section featured two pairs. They gave and took weight, contact improvisation turning into gorgeous lifts. Shoulder-to-shoulder became a lift over the shoulder to swoop and fall under his partner’s arm – a human waterfall. 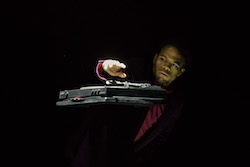 The Harvard Dance Project in ‘Fitting Out’, choreographed by Peter Chu. Photo by Liza Voll Photography.

The music sang out “no matter your color, you’re still my brother.” Unity was clear and powerful. Chu discussed such unity in his program letter, stating that “a communal experience without social barriers is celebrated when moving and working together.” Gracefully, they crawled off stage on all fours – no matter any differences, all of them (and all in the audience) were human animals. A following section had similar movement with a larger ensemble. The lights gradually faded down, along with the movement.

The lamp on upstage left was then the sole light in the theater. The piece also contained various other aesthetics and images. So, I came away reminded how all people are joined by an ability to imagine and create. I was thoughtfully engaged, just as I was after the two pieces before it. Amongst lovely dancing and solid aesthetic, perhaps that guidance to deeply think is the greatest offering of all.