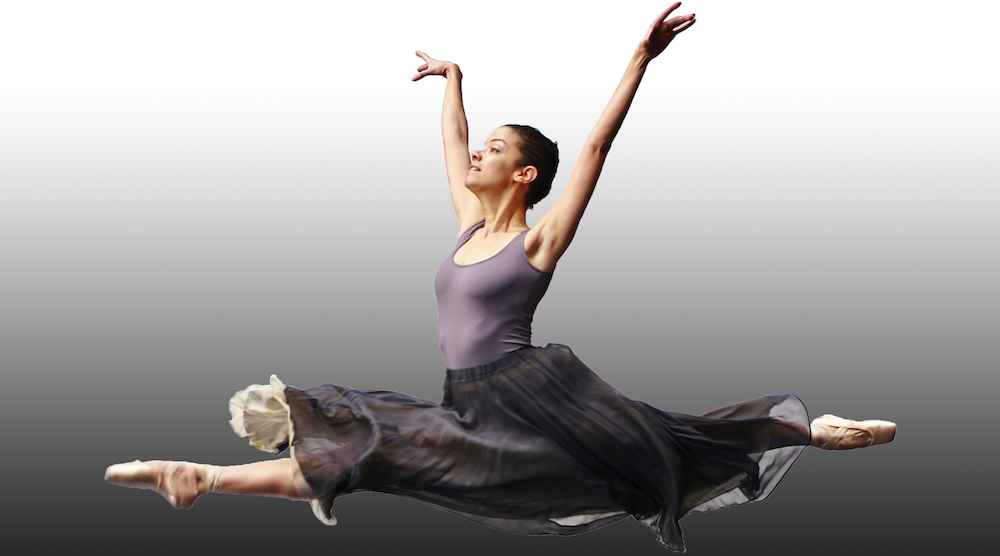 It’s said that dance is the most ephemeral art form; arguably, more than any other art form, there’s nothing quite like seeing it performed live. The energy and tempo of the dancers’ movement, the sounds of their breath, the flow of their costumes – all things that cannot be captured in video or photography quite like they can by our own human eyes in the moment of viewing. Yet some dance photographers can capture elements of the energy in movement, such that the photography becomes its own captivating art. At the same time, it honors and displays the art that is the subject matter. 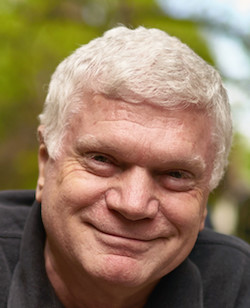 Boston-based Bill Parsons has photographed dance since 1968. This past March, he held his first photo show exhibiting select work from these years. The Mp3 Jazz Trio (Markus Pinney on piano, John Clark on bass, and Harvey Nosowitz on drums) entertained guests from entrance to exit, with jazzy tunes from across the years. Mini-cheesecakes of various flavors, strawberries and an open bar were there for guests to enjoy as well. Lighting in the room helped direct guests’ eyes to the works on one main wall. Parsons spoke at one point, explaining what the work means to him. “If we don’t have art, we don’t have life,” Parsons asserted. He also shared how his wife, ballet teacher and choreographer Margot Parsons, has inspired and supported him. “Tonight was her idea – the food, everything!” he said joyfully.

This exhibit remains open until April 13. On one side of the photo wall are dance photos – seemingly in performance and in studio. In one, a dancer is in a full grande jeté, arms energetically reaching up to the sky. She looks upwards as well, with her chest also proudly lifted. A long, flowing skirt matches the color of the background shade of lavender.

This shade gradually fades to white toward the top of the photo. A slight blur at the edges of her form evince her movement within the leap. This supports an overall sense of the directional energy in her body as she leaps. More than that, viewers can peer into her heart and soul engaged in her dancing – at a peak in this captivating leap.

In a series of images, a trio similarly offer heart and soul in movement. In one, a dancer in relevé arabesque stretches hands and fingers wide from arms reaching forward and backward, energy rippling out in every possible direction. Her trio partners hold lower space and energy, one knee bent with a hand drawing down the same leg and the other in tendu à la seconde. 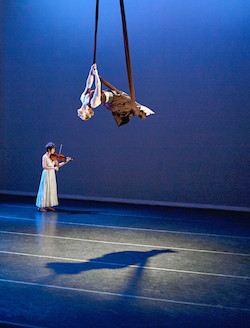 A second image displays them with interlocked arms and heads tilted in various directions, feet in parallel first position. A third image had them in the same configuration, yet with low attitude shapes and even more sense of interlocking limbs. All in all, the photos together give a sense of the energetic, dynamic possibilities in movement that it seemed the piece offered – yet that held in posterity through photos.

Another striking photo is one in quite a different dance style, yet also captivating in portrayal of dancers in relation to one another. One dancer hangs in an aerial sling, her shadow filling a floorspace a few feet downstage of her. The arching energy of her backbend over the sling is palpable. Farther upstage is a violinist. Similarly, one can feel her body absorbed into the dance of her playing, her instrument her partner. As a still photo, it’s visually captivating. As dance portrayed in photography, there is also a movement within the image that stretches beyond the constraints of the medium.

A photo of a soloist also draws my eye. Her long, rippling red skirt sweeps back with her strong arabesque. The same arm reaching backward, on an even parallel line with her leg, completes the moving picture in her body. She’s in a square of light, her black leotard top accentuating her upper body lines within the square.

The darkness of the unlit space also has a spatial relationship with her shape. Her physical momentum is most striking, however – her arabesque cutting through air, her gaze surely fixed outward to the opposite side of the stage and her chest proudly pulling in that direction as well. Aesthetic, emotional and spiritual – it’s all here.

The non-dance related photos on the opposite side of the exhibit are mostly well-constructed images of more stillness – including portraits, legs lounging with feet in flip-flops, teddy bears in American flag colors with an American flag to join them and even a wedding photo. Yet a couple of these have the compelling sense of movement that Parsons captures on the other wall of dance photos. In one, a child swings joyfully. There’s a nostalgic sense in the “low-tech” fun. 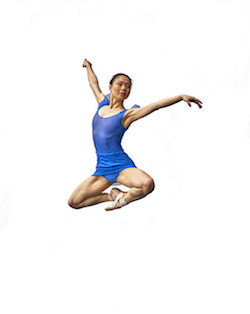 The child’s legs swing backward as she also leans back through her torso. Her eyes are closed, and she has a slight smile, evincing a sense of energized calm. The curve through the swing’s chain-link sides also bring a sense of the physics involved in this simple form of movement play. It feels as if what one would take in, in real time, on any average day on any average playground.

In another photo, Parsons depicts a pianist and (seemingly) artistic collaborator. The pianist crosses arms, in a sense of passionate creative action. He looks toward his creative partner as she leans in toward the music, their back to the viewer. The bottom of a red stage curtain in the top third of the photo feels somehow moving, with a sense of echoing movement from being drawn.

In this and other works, Parsons demonstrates a range of the possibilities that photography has for conveying movement, whether dance or non-dance. There’s nothing that can truly replace seeing dance and movement live, in real time; yet, photography like this can offer much of the magic, while also being an invaluable art form in its own right.