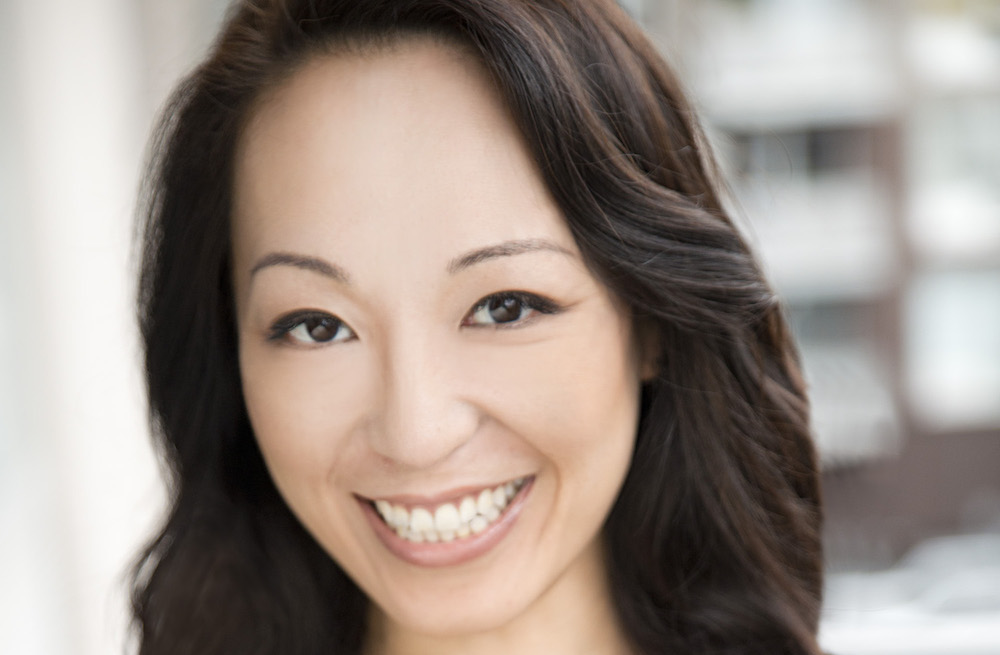 Broadway Connection (BC), a performing arts education company, boasts a stellar faculty that is committed to inspiring the next generation’s love of musical theater. Most of the organization’s teachers are performing on Broadway or in a National Tour, giving them fresh, real-life experience to pull upon when leading a workshop or master class. 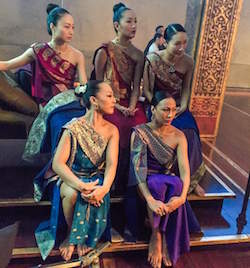 Yuki Ozeki (front left in blue) waiting during a commercial shoot for ‘The King and I’. Photo courtesy of Ozeki.

BC Teacher Yuki Ozeki is one such artist who has a wealth of experiential knowledge. We recently caught up with her to learn more about her background and what she’s currently performing in – The King and I. This touring revival is directed by Tony Award winner Bartlett Sher and features choreography by Christopher Gattelli, based on the original choreography by Jerome Robbins.

Yuki, can you first share a little about your background in the performing arts?

When I moved to the United States at the age of 15, I started taking other dance technique classes at the private high school I attended, such as modern, jazz, tap and musical theater.

Then I continued my performing arts education at New York University (NYU), where I also had the opportunities to take voice lessons, as well as participate in some musical productions. I received a Bachelor of Science in Dance Education.” 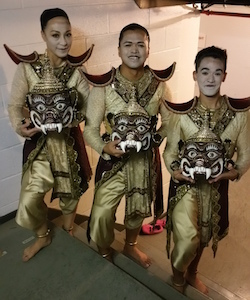 Yuki Ozeki (left) filling in for a Dog in the ballet scene in ‘The King and I’. Photo courtesy of Ozeki.

Speaking of the musical The King and I, you are currently cast in a national tour of this show. This is clearly a production that you have a long association with. What’s your role right now?

After performing so many variations of The King and I, how do you keep the show fresh? What strategies do you employ to approach the story with new energy and zeal each week?

“Something I was told many, many years ago by a stage manager always stuck with me: ‘Remember, this may be your 1,000th time doing the show, but someone out there has never seen it. They went out and bought a nice dress just to come see your show tonight.’ Another statement that I have heard that is similar is: ‘Remember, tonight is someone’s first theater experience, and it could be someone’s last.’ These statements keep reminding me to give my all at every performance. 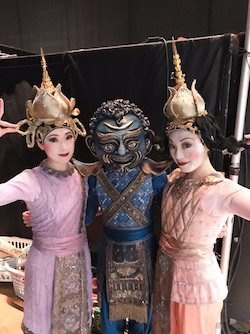 Yuki Ozeki (right) as Topsy in the ballet scene of ‘The King and I’. Photo courtesy of Ozeki.

One more reason that keeps me in check is my position as the Dance Captain. As a leader, I believe you need to lead by example, so when I am on stage as an Ensemble, I try my best to always be ‘present in the moment’.”

Based on your numerous tours, what does it take to stay strong and always be at your best when on the road?

“You really have to learn to take care of yourself. Sleep well, eat well and exercise. Learn your limit. Sometimes it means you have to say no to hanging out after the show…”

If you had to choose one scene, which would be your favorite in The King and I?

“As the Dance Captain, I am slightly biased… I have to say my favorite scene is ‘The Small House of Uncle Thomas’ Ballet in the second act.”

As a Broadway Connection teacher, how do you seek to inspire young artists? 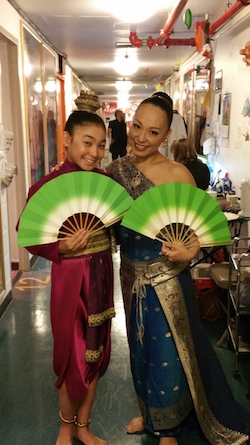 Yuki Ozeki (right) backstage before the Fan Dance for ‘The King and I’. Photo courtesy of Ozeki.

“I think it is important to encourage any and all students to explore their possibilities. Everyone is different and unique, as they should be! I would want students to try their best in everything, and find out what they are good at (or not good at) and what they are interested in.”

Do you have any advice you’d like to share with young artists who dream of being on Broadway or in a national tour?

“An obvious advice would be to keep up with your training! Keep at it; don’t give up. But also, try to find your strength as well as weakness, which will help guiding you in the direction you want to head in the future.

Another piece of advice is to always be nice and respectful to everyone, on and off stage. I have seen and heard many times when people did not get jobs because of their reputation.”

Looking back at your career thus far, what’s one thing that has surprised you about being a professional in musical theater? Something you didn’t expect when you were starting out?

“While everyone has strengths and weaknesses when it comes to dancing, singing and acting, you really need to be a ‘triple threat’ today, even more so than before. I always knew this, but I have experienced firsthand how marketable you become when you are a true ‘triple threat.’ With that said, your training never ends when you start performing professionally. All of us still take dance classes, voice lessons, and acting classes and workshops.” 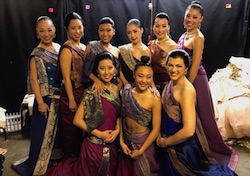 Yuki Ozeki, back left, with The King and I women ensemble. Photo courtesy of Ozeki.

Lastly, are you currently working on any other projects?

“Not quite a different project, but I am in talks to assist setting The King and I in West End, London (starring Kelli O’Hara, Ken Watanabe and Ruthie Ann Miles) that will open in early July. That will be so exciting!”

To see Yuki Ozeki performing on tour with The King and I, book tickets for a city near you at www.thekinganditour.com. As of right now, the show tours through August 12, 2018. More cities may be added to the tour. Also, the new 2018-19 tour schedule will be announced soon.