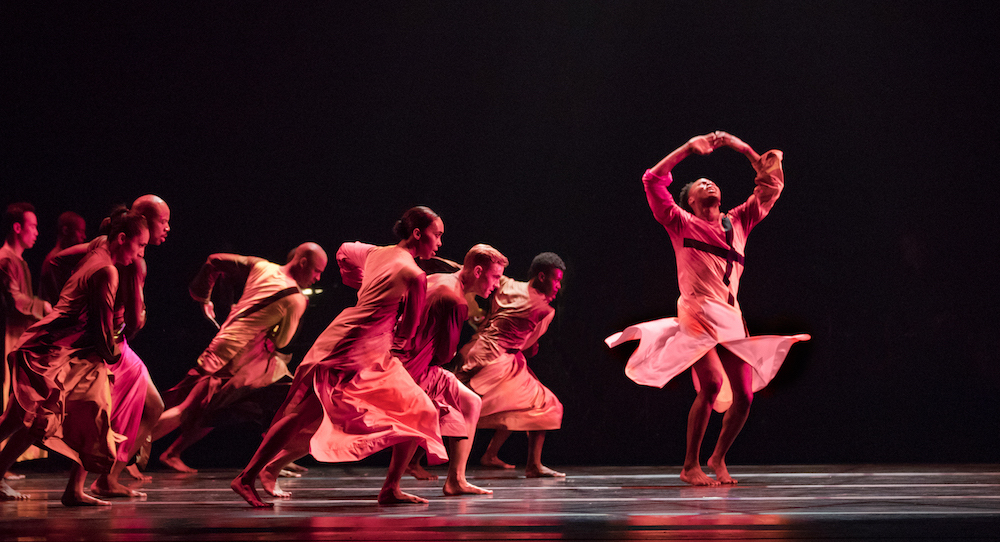 There is just something about dancing. Within it, we can find a unique harmony, connection and flow within ourselves and with others. It can be an experience of one’s raw soul. Concert dance, at its best, can make this experience fundamentally clear. Performers finding soul in these ways can truly resonate with viewers and connect to their innate empathy, our true sense of connection with other human beings. They can even inspire us viewers to find that experience of soul – that within ourselves and within others. 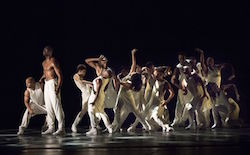 Alvin Ailey American Dance Theater (AAADT) offered this, and much more, in a diverse program at City Center. The first piece, Exodus, choreographed by Rennie Harris, began with an air of mystery – a horizontal band of light spreading high above the stage, and all the rest dark (lighting by James Clotfelter). There was enough light to see one dancer slowly walking. The sound of a gunshot rang out, and he – as well as dancers sprawled across the stage – jumped. Oh yes, were we audience members snapped to attention! Everyone seemed fine – phew!

Intriguing narration commenced, much of it seeming rather “meta” – an art form commenting on itself and the nature of art itself. One line was beautifully poetic, and seemed to stand out as important: “This is the public experience of divine soul.” All the while, dancers continued to move slowly, cautiously, fluidly yet methodically. They slowly rose to a higher levels. Lighting increased to the point where shadows moved across the plain black backdrop – towering figures seeming to foreshadow these figures’ higher, greater potential. 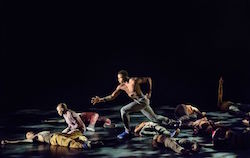 To some level, that came to bear, as the music picked up speed and the dancers kept right along with it. They moved in compelling formations, with captivating non-unison and powerful, crisp unison. Hip hop idiom signatures and variations – such of pop and lock, body rolls, and “top-rocks” – were clear. Yet, without losing the sense of grounded strength this movement requires, the dancers moved with the smooth jelly-joints of seasoned contemporary dancers.

Perhaps most importantly, unity and inclusivity prevailed. A next bit of narration announced, “You may be black, you may be white. You may be a Gentile, you may be a Jew. Don’t make a difference in our house.” They embodied this sense of inclusive connection when they came to one big clump and moved more slowly, fluidly – their limbs like an amoeba’s tentacles. They broke out for more shifting formations, unison and non-unison. Finally, the curtain dropped, but they were still standing. Their connected souls would keep dancing on. 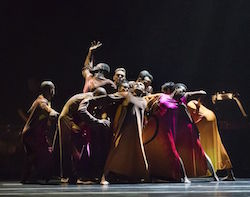 The second work, Mass, from AAADT Artistic Director Robert Battle, was quite different in tone and atmosphere. It portrayed a different kind of unity, but a unity all the same. Dancers in flowing robes of red and yellow (costumes by Fritz Masten) moved together as atoms do in chemical reactions. A peeling off and circling of one led others to follow. A few leaping up and falling to the earth led others to do the same. One rose after all fell, and more slowly rose again, one by one. Individual dancers were catalysts for further movement and energetic shifts.

Given also the color of their robes, one could see the dancers as pure energy. The title also connotes a religious/spiritual meaning, certainly in the piece to find as well. Light and darkness, relationships between the individual and collective brought to mind good and evil, religious and spiritual practice. Whatever meaning may resonate, visual and sensory was there to enjoy. Quick stepping to xylophone tones, to stillness into trashing movement, and more kept eyes and minds happily engaged.

The third work, Christopher Wheeldon’s After the Rain Pas de Deux, was a lovely modernizing of a classical pas de deux, danced by Jacqueline Green and Yannick Lebrun. Movement was slow and methodical to start, then found greater speed and release as a solo violin came in to join the lilting piano score. Groundedness and floorwork were counterweights to high lifts and extensions that reached for the sky. It wasn’t classical. It wasn’t modern. It just was what is was – visually striking and soul-stirring. 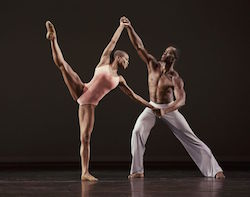 Green rotated on Lebrun’s sturdy thigh (in a deep plié à la seconde), one foot resting there and the other reaching out for the opposite side of the stage in a lovely battement. He was supporting her flight, her connection with freedom. In a similar stunning pairing, one foot on his thigh stretched away from the other in a split – ultimately releasing to land her in a grounded full split. These moments of tangible connection were powerful and memorable, yet their energetic connection was still strong when they danced apart (sometimes in unison, sometimes in simultaneous solo).

One element that might have added further aesthetic value to the piece – Green had a signature, a rock-solid, nearly vertical développé that she offered often. Lebrun didn’t have such a signature, as in the classical tradition; his purpose seemed to be demonstrating strength and to help his female partner shine. Something seemed to call for him to have his own unique movement as well. The piece diverted from classical tradition in other ways, quite successfully, so why not in this way? I’m confident that Wheeldon could create something wonderful for the male partner in the work through which to demonstrate his individuality.

The fourth and final work, Billy Wilson’s The Winter in Lisbon, closed the night with joyful energy. Jazz music and movement vocabulary (isolations, parallel passés and the like) brought a jazz club atmosphere. Brightly-colored costumes (by Barbara Forbes) mixed with somewhat low, hazy lighting (by Chenault Spence), helped the dancers’ every move pop – just like the notes in the jumpy jazz score. Little vignettes filled the piece, just as separate couples, groups and solo individuals in a jazz club have their own nights – and larger life stories – rolling out side-by-side.

Michael Francis McBride moved with striking smoothness, blending pedestrian and highly technical movement to the point where it was all just his wonderful movement. Michael Jackson, Jr. And Kanji Segawa joined him, with similar ease but more brawn. They moved together like true buddies just grooving out, as natural and joyful as could be. A following duet echoed After the Rain, yet with a more sultry and somber feel. Ghrai DeVore and Jacquelin Harris wore a shade of purple, a classic color of royalty.

They were just as dignified and assured in their performance. She turned in battement, and he caught her mid-turn. This was simply complete trust and connection. A final ensemble section followed, the height of the work’s joyful and energetic vibe. There were Fosse-style moments, all focused on a shoulder roll and head shift. There were others of whole body engagement. Hands clasped wrists into turning, then grounded footwork.

Lights faded down on a tableau of confident poses. There was a sense of their joy continuing, even if what was for the audience was completed. It was all a different version of the “demonstration of public soul” on which the first work focused, and truly all of them exhibited. There are so many ways that the art of dance can offer that. AAADT offered four here, four to be treasured and not soon forgotten.