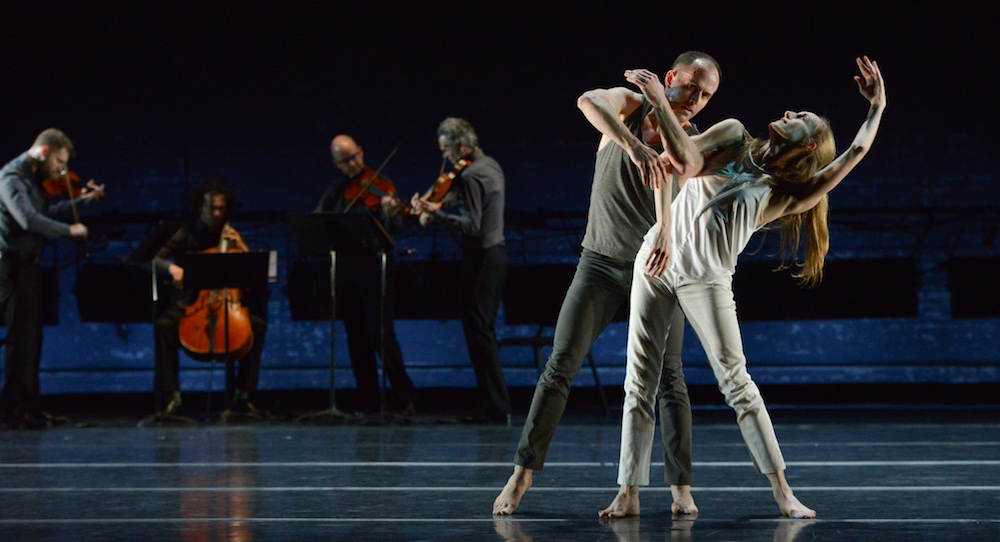 As I headed to the Clarice Smith Performing Arts Center last night, the world outside was hushed and frosted as the first powdery flakes of the season fell from the sky. The delicate, quiet beauty of the snow turned out to be the perfect prologue to the one-night-only engagement of Some of a Thousand Words I had ventured out in the cold to see. The production featured performances by Wendy Whelan, formerly a principal dancer of New York City Ballet; Brian Brooks, dancer, choreographer and director of Brian Brooks Moving Company; and Brooklyn Rider, a string quartet with an eclectic, contemporary repertoire. Even before the performers took the stage, there was a sparse, intimate feel to the space with the stage stripped bare of all adornments except one chair, four music stands and a white half-curtain that was printed with a subtle brocade pattern and spanned the horizon of the stage. Much like the snow continually falling outside, Some of a Thousand Words had a cool, subdued intensity to it that was at times repetitive but ultimately proved spell-binding. 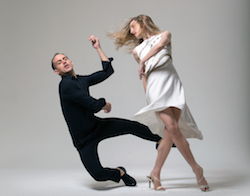 Although Brooks is billed as the choreographer of the work, excerpts of interviews included in the program revealed the project to be more collaborative in nature, which makes sense given the maturity and sophistication of the pair. Both in their 40-50s, Brooks and Whelan have crafted a sort of chamber ballet showcasing their considerable strength, precision and elegance as mature movers at a time of in life when most dancers are retiring from the stage. In fact, Whelan gave her final performance with the New York City Ballet in October of 2014, after 30 years with the company, which certainly could have marked the end of her performance career. Instead, she has reinvented herself, producing her own independent project, Restless Creature, as well as collaborating with contemporary choreographers such as Brooks. This most recent collaboration featured four movements created specifically for this program, as well as an expanded version of First Fall, a duet originally commissioned by Damian Woetzel for the 2012 Vail International Dance Festival. Each movement was accompanied by the rich sound of the musicians of Brooklyn Rider, who were on stage for the duration of the program, even as the dancers entered, exited and re-entered the space again over the course of the roughly one-hour performance.

Accompanied by the urgent, almost pleading tones of cellist Michael Nicolas, Whelan and Brooks began the work side by side executing a seemingly weightless, gliding walk while wearing almost identical tank tops and pants in shades of gray. As the first movement unfolded, the pair continue to glide and shift across the stage like water bugs skimming the surface of a pond, in a continually changing but not entirely predictable pattern. Throughout this exploration, their upper bodies remained mostly taut while their limbs alternately dangled or spoked through the air. Although they moved together in near perfect unison, their bodies carved the space in a manner that betrayed the different forces which have shaped their instruments over time. Whelan’s lifetime of ballet training was decipherable in every impeccable stretch of her perfectly arched feet and lift of her long, slim legs, while Brooks’s more compact form maintained a earthy, rounded sense of weight even in moments of extension.

From the beginning, I read the program as sort of a study in the relationship between two bodies seeking commonality after a lifetime of being inscribed with different messages. At times, Whelan and Brooks achieve a near perfect balance of her sometimes austere precision and his penchant for continually unfolding motion where they moved together with a beautiful, elegant unity. The most alluring moments of the work, however, depend upon the interplay between their differences, especially where Brooks’s strong, malleable body bends, curves and dips in support of Whelan as her lithe form falls into his and springs into long, elegant shapes reminiscent of her Balanchine days. While the entire program was choreographically well-crafted and masterfully performed, the final duet, First Fall, was definitely the highlight of the program and served as a sort of stunning finale, an impressive culmination of the play between their bodies throughout the show.

Set to a composition by Philip Glass, the magic of the First Fall duet depends upon Brooks’s capable body repeatedly negotiating controlled descents into the floor in order to catch, support and lower Whelan’s elongated form to the ground in a captivating sequence of trust falls. Whelan tips backward in an unyielding plank over and over again, from different angles, and in every repetition of the interaction we see different facets of Brooks’s descent sequence, which proves to be just as precise and specific as Whelan’s erect form. Just as the audience was becoming accustomed to the smooth, almost breathless effort of these partnered descents, Brooks began to shift under Whelan’s weight while still on the floor, the pair moving almost imperceptibly across the floor. Gradually, these small shifts evolved into a slow, exquisitely controlled ascent where Whelan’s fully extended form remained precariously balanced against Brooks’s body. As the pair remained connected and returned to standing without Whelan ever compromising the integrity of her long, almost rigid form, the audience could be heard audibly gasping all around me. It was certainly a marvelous sight, a subtle yet mesmerizing brilliant effort. Even as the pair executed the sequence again, there was a sense of disbelief and awe that such a feat was replicable. The duet ends very satisfyingly with one final lovely descent as lights faded to black with the musicians and dancers simultaneously dissolving into the shadows. Although some sections of the program were less compelling than that closing duet, I stepped out of the theater and back in the sparkling, white world beyond still very much under the spell of that final moment.