When it comes to art, there are so many ways we can define “grand”, “spectacular”, “gorgeous” and the like. It can be in bright colors, booming music and overall technical virtuosity. It can also be in small, precious qualities and moments that speak to our shared humanity. Perhaps The Nutcracker has become such a lasting, ubiquitous and beloved holiday tradition because it can exhibit grandeur all along this spectrum.

This year, Boston Ballet’s presentation of the holiday classic, choreographed by Artistic Director Mikko Nissinen, did include grandeur on the big-and-grand side of this spectrum. Yet more evident was humour, warmth and the human connection that the holidays are truly all about. This style began right at the opening scene, with a woman walking slowly before Drosselmeyer’s toy workshop. There was something contemplative about her. One could interpret her as a call to audience members to be mindful, thoughtful ones. 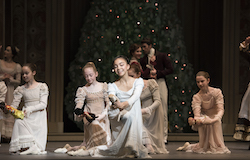 Lights came up on party scene, on a stage of naturalistic, subdued tones (lighting by Mikki Kunttu, scenic design by Robert Perdziola). The children were joyful and proud, smiles wide and chins lifted. Fritz (Seiya Saneyoshi) executed clean turns and precise petit allegro. His sister, Clara (Elise Beauchemin), moved with a sweetness just right for her character. Parents offered a softness with their meticulous footwork and extensions, an ease that seemed natural and genuine for party guests.

Drosselmeyer (Lasha Khozashvili) had a perfect lanky mysteriousness, something spider-like about him. Harlequin (Patric Palkens) commanded the stage with wow-worthy technical feats. Ballerina Doll (Hannah Bettes) was just as proficient, yet her offering was more in lovability. It all felt like the makings of a favorite children’s tale, read over and over before bedtime. Magic was sprinkled here and there; Doll and Harlequin were lifted and brought offstage with impressive ease, as if by a spell. The choreography seemed to reach for more and achieve it. There was no fear of daring to go for that!

Light-hearted fun and humor were present, too. The parents’ facial expressions and gestures brought joyful laughs. Some movements, such as a kick out to the side and shake, were part of the scene’s overall warmth, humor and authenticity. In that same mode, when guests had exited, the maid walked around to putter and make sure everything was in order. Then came the Mice scurrying onstage!

These characters bring humor into most Nutcracker productions, but unique moments in this particular production increased this effect. For instance, one mouse snuck a cupcake off with him! The Soldiers soon came to fight them, in crisp lines and spacing – a well-trained mini-army. Unique choreographic moments enlivened the scene, such as turns from deep plié à la seconde to extend swords forward. 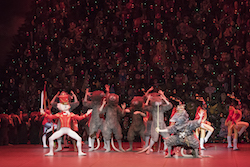 As the soldiers beat them off, with the help of Clara (who, classically, threw her shoe to take out the Mouse King – Matthew Slattery), the iconic music of the Snow Scene rose up from the orchestra pit. The fairy-like Snowflakes filled the stage. Even with incredibly detailed and fast choreography, these Snowflakes demonstrated a grounded ease. They moved offstage for the Snow Queen (Anais Chalendard) and King (John Lam) to dance their pas de deux.

There was something here emblematic of how and why The Nutcracker has become such a beloved holiday tradition; there is a magic very seldom seen and felt elsewhere in our work-a-day lives. Immersed in this tale, we can forget our stressors, and simply feel dazzled, delighted like we haven’t in a long while. Clara and the Nutcracker Prince (Paulo Arrais) carried this magical sense into the second act, supported by the dancers of all the variations to come. He offered the simultaneous grace and strength that makes him such a magical figure for Clara.

The Spanish dancers (Emily Entingh, Chrystyn Fentroy, Martha Slattery and Desean Taber) hit off this section of variations with vim, verve and proud flair. Even with the piece’s fast pace, it seemed as if they drove the music forward, rather than the other way around. Following them, the Arabian partners (Maria Baranova and Paul Craig) worked together with captivating seamlessness. Baranova‘s extensions seemed to expand miles across the stage space. 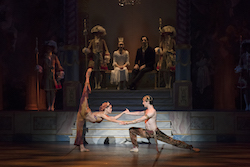 Chinese Tea brought a somewhat brighter stage, with Asian-style lamp bulbs lining stage right and left. This was a nice way of changing the look of the stage space through the Land of Sweets section, one that also worked well with the bright feeling of this particular variation. Dancers Ji Young Chae and Irlan Silva had precise timing to pair the rapid and jumpy music.

French Pastorale (Derek Dunn, Diana Albrecht and Nina Matiashvili) demonstrated a different kind of notable technical finesse – of facings, carriage, extensions and turns. This variation is arguably the most purely classical in the show. The black sheep character keeps it from feeling too serious, which would be jarring in the midst of such overall lightness and fun in the rest of the show. It appeared to play more prominently than in past years of Nissinen’s The Nutcracker – perfectly in tune with the overall mood of this year’s presentation.

The flock moved, but the black sheep didn’t, to then scurry after – at the beginning and end. From at least one life experience, most audience members can relate. Deep laughs echoed through the theater. The following Polichinelles are, of course, also known for bringing laughs. The children in this performance brought that, along with professionalism and joy. The costumes were fun and unique, checkered with white skirts for the girls. 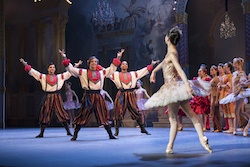 Bringing a bit of a different feel, Russian (Lawrence Rines with Mamuka Kikalishvili and Patric Palkens) brought power from the first note. These dancers took up stage space in three dimensions. Similar to in Chinese Tea, they seemed to propel the music forward, not the other way around. They bounded off in all their power, and the Flowers entered. From their elegant port de bras to their skirts catching the eye as they turned and leapt, they were as supple and willowy as true flowers.

True strength was evident as well with moments such as lighting-like battements à la seconde, a slight shift off center for a slow, controlled descent. Épaulement and shifts of gaze were like a gentle breeze moving light and billowy flowers. Dew Drop (Seo Hye Han) seemed somehow delicate yet unbreakable, unshakeable. Tenacity underlaid softness. Then to the iconic pas de deux, with lifts and other picturesque moments that Nutcracker lovers look forward to every year.

Hye Han’s petit allegro was like butterfly’s wings, sometimes moving faster than the eye can absorb. Arrais could leap in a way that grace was more evident than the power required for these feats. The whole cast then filled the stage for the Finale. It was a high moment of magic, brightness and air of unity. In all sorts of costumes and types of characters, they could all stand together. By emphasizing humour and warmth in this year’s Mikko Nissinen’s The Nutcracker, Boston Ballet reminded us that – whatever our differences – we can find common humanity and stand together this holiday season.