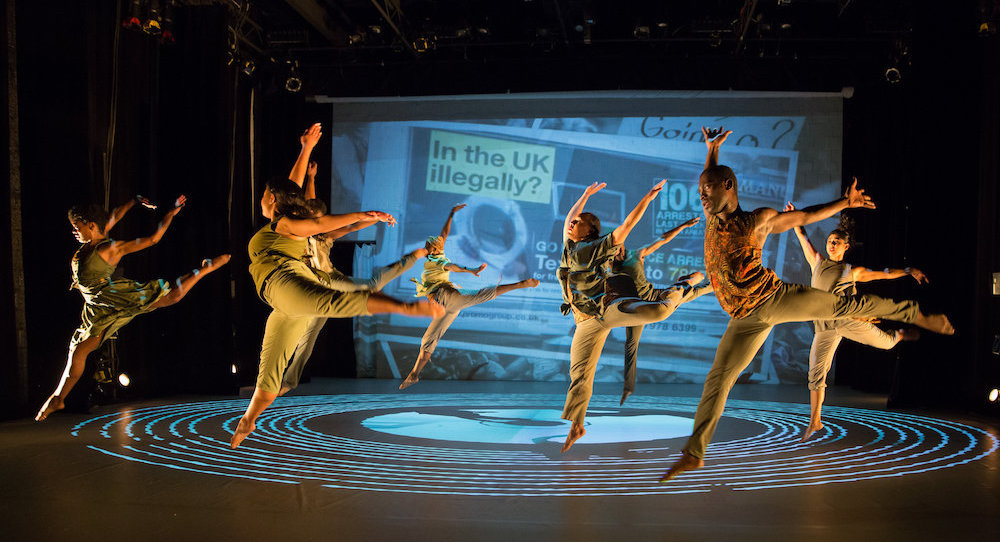 Dance Place, a much-beloved part of the D.C. area dance scene, was buzzing with excitement on opening night of What’s Going On: Life, Love, Social Justice. A quick glance at the program revealed that Vincent E. Thomas, the artistic director of the project, would be receiving the Pola Nirenska Award for Outstanding and Lifetime Achievement in Dance following that evening’s show, which accounted for all the area luminaries in attendance, including members of the award committee. Commissioned by Dance Place last year, What’s Going On was inspired by the music of Marvin Gaye and features choreography by Thomas, as well two other distinguished D.C. area choreographers, Ralph Glenmore and Sylvia Soumah, the latter of which is also a past Pola Nireneka Award recipient. From the moment Thomas entered through the main aisle of the theater, he was greeted with enthusiastic applause and cheers; clearly, the company of What’s Going On would be playing to the “home crowd” tonight. 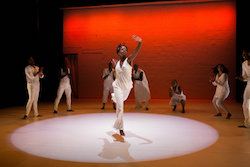 Ronya Lee Anderson and cast in ‘What’s Going On’. Photo by Jonathan Hsu Photography and Video.

Dressed in a long white tunic, Thomas came in with microphone in hand and played the role of game show host, immediately splitting the house into Team This and Team That to play a trivia game about the life of Marvin Gaye. This interactive start of the show betrayed that this program expected more than just passive attention from the audience, and, for their part, the audience was ready to play along and enjoy the fun. After the first two trivia questions about Gaye’s life, the audience received a “prize” from Thomas, which got everyone out of their seats and dancing in the aisles. The first prize was the National Hand Dance, which is native to the D.C. area, and the second prize was an old favorite, the Electric Slide. Virtually the whole crowd was on their feet moving with Thomas and some other dancers leading the charge.

Following the third trivia question, the main company took the stage and were joined by the ensemble members who had been working the crowd during the trivia “show”. Dressed in long layers of pure white, the main company of five women and four men bounded on stage with joyful yet grounded, full-bodied movements accompanied by live percussion and the strong, resonant voice of singer/dancer Patrick Casimir. The additional ensemble members formed a large semi-circle that framed the main company as they performed a series of high-energy solos and small group dances. The scene invoked the religious heritage of Marvin Gaye, who attended the House of God Church in D.C. as a child. An accompanying quote projected on the back wall of the stage was attributed to Gaye in which described the services at his home church as “tapping into the energy of universe”. Gaye’s words also serve as an apt description of Sylvia Soumah’s West African-style choreography for this section of the show. Since the audience was already in a dancing mood, the crowd continued to groove in their seats and clap along until the company yielded the stage to a more somber solo performed by Thomas. Set to a version of The Lord’s Prayer, Thomas’ brief but powerful solo carved out a reflective space for both himself and the audience while beautifully revealing the depth of his expressivity and control as a performer.

After Thomas’ exit, the rest of the first act of the show had the feel of a house party and took place in a mod mid-century living room comprised of both projected images and on-stage set pieces. Wearing vintage-look costumes in deep reds and oranges, the core company, minus Thomas, moved in tight proximity to each other on the projected rug of the living room to tunes seemingly pouring out from the on-stage record player. Eventually, the company spilled out into the rest of the space performing a series of duets, solo and small ensemble numbers set to a series of Gaye hits like “Heaven Must Have Sent You From Above”, “My Funny Valentine” and “Pride and Joy”. Featuring jazz choreography by Ralph Glemmore, this section featured lots of upbeat 1960s era social dancing spiced up with some highly technical jazzy turns, jumps and tricks. The well-matched, youthful pair of Sara Herrera and Heniz Adjakwah kicked off the featured numbers with a sweet, romantic duet before yielding the space to a more sensitive, wistful solo performed by Ronya-Lee Anderson to “My Funny Valentine”. Soon the whole company was kicking and jumping with an infectious energy, culminating in one of my favorite numbers of the first act — a raucous performance by the whole company to Gaye’s “Ain’t No Mountain High Enough”. 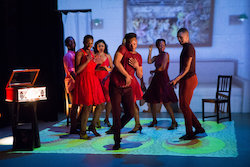 The cast of ‘What’s Going On’. Photo by Jonathan Hsu Photography and Video.

Although the choreography sometimes had the feel of a Broadway review, a projected quote by Gaye about the connection between social dancing and social justice provided a deeper context for the work. As I enjoyed the crisp lines of the well-rehearsed company, I also kept thinking about the power inherent in seeing a group of brown-skinned men and women from diverse backgrounds united in rhythm and movement. With the many recent images of police brutality against brown bodies in the news, I could not help but see the joy of these dancers and their articulate bodies as a kind of political protest, a statement that they are defiantly alive and thriving. As the curtain closed on the first act, the phrase “the oil of joy” from Isaiah 61:3 came to me; in that passage, those who grieve in Zion are promised “a crown of beauty instead of ashes, the oil of joy instead of mourning.” Despite having much to grieve in our nation, these dancers laid claim to that crown of beauty, to that oil of joy, and it felt healing for the diverse audience of folks of all colors and backgrounds who had gathered together in the audience that night.

During the intermission, Thomas came back out to reprise his role as MC and invited the audience to participate in a “social interlude”. Some of the ensemble dancers passed out small church fans that Thomas called mini-protest signs. He then invited the audience to reflect and write on the signs as prompted by on either side: “Celebrations in my community” on one side and “Concerns in my community” on the other side. It seemed like a meaningful exercise given my reflections on the first act, and the whole audience was really engaged in the process. Many folks were still writing as the curtain opened on the second act of the show.

From the start, it was clear that the second act would have a very different feel than the first act. The core company entered wearing the colors of army fatigues and carrying blank protest signs onto which Thomas projected famous images from the Civil Rights era using a small handheld camera. As the ensemble gathered in a tight formation with their signs held aloft, Thomas danced alone with strong, deliberate movements in a downstage spotlight as, one by one, the company flipped over their signs to reveal words like “transformation” and “lives matter”. Unlike the intimacy of the house party, where each individual seemed safe to express their joys or doubts, the act of protesting in a public space demanded a kind of stoic unity and disciplined, almost military-like attention to formation from the dancers. These opening images of the second act were a powerful reminder that brown bodies are not safe in many public spaces in this country, and that the struggle to have their lives matter has been an ongoing one for generations. 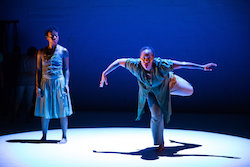 Jessica Mncube in ‘What’s Going On’. Photo by Jonathan Hsu Photography and Video.

Soon after Thomas’ solo ended, a projection of Marvin Gaye singing the National Anthem played out while the full company struck a series of static poses comprised mostly of kneeling, saluting and the black power fist. These quiet gestures soon evolved into a more forceful statement of protest as the full company sprinted toward the audience and then performed a series of frenetic passes toward the audience and away, at times in unison and other times in tight canon. Later, the entire company huddled together as they wept and convulsed with grief for such an extended stretch of time that the audience’s discomfort began to be palpable. The contrast between the attack of the former section and abject sorrow of the latter section spoke to the experience of people of color in this country who must alternately rage against and weep in the face of the violence propagated against them. Toward the end of the second act, Ronya-Lee Anderson delivered a forceful word in form of a poem “What’s Up, Marvin?”, which served as the accompaniment for an athletic yet vulnerable solo performed by Jessica Emily Peasant Mncube. Both the movement and text of the poem forced the audience to grapple with the questions “What is going on in our country?” and “What are we going to do about it?”

At the close of the show, Thomas once again addressed the audience directly, asking us to share verbally some of what we wrote about celebrations and concerns in our communities. Using these responses, Thomas created a movement score of gestures and led the audience in performing the movement. When the company returned to the stage for an upbeat, finale number, they also joined in the gesture dance, and it was surprisingly touching to see that movement being performed by my neighbors in the audience as well as mirrored by the on-stage cast. One of the stated objectives of What’s Going On is to provoke reflection and spark conversations to ignite change in each community it touches, and I left the theater that night feeling that the work had accomplished just that. As I drove home, I reflected on some of Thomas’ final words to the audience: “What action can you take to turn your concerns into celebrations?” It is a question I will live with for many days to come.