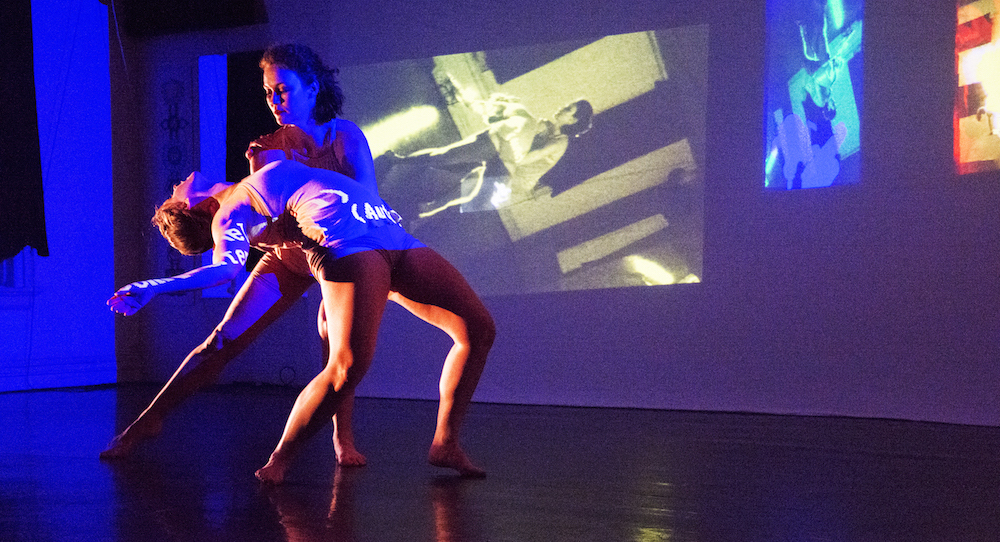 “Ballet is woman,” said George Balanchine. Yet as he proclaimed this, at the helm of concert dance – as choreographers, artistic directors and the like – were men. In 2017, long-standing questions about women holding such positions of influence in the dance world still resonate. Why aren’t there more female artistic directors? What can we do to raise up women in the field? It’s a microcosm of the world at large – we’ve made clear progress towards gender equality, but we still have far to go. 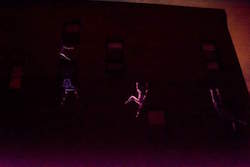 Callie Chapman’s SCALE highlighted this truth, mainly focusing on the latter part. This focus was not so aggressively overt as to be the work’s only available interpretation and offering; at the same time, it was innovative, immersive and visually astounding. A balance between the cleanly geometric and the fuzzily diffuse began at the very beginning, with projections of (what appeared to be) nude human forms “scaling” the outside wall. Was this part of the work’s title? Other projected nude people seemed to be in warm embrace.

Audience members huddled for warmth in the chilly night on the roof of 550 Massachusetts Avenue, above Chapman’s Studio at 550. The surrounding walls served as cycs (or clear backdrops) for projections throughout the work. Waves of blue and green hues followed. Along with the nudes, these colors brought a sense of the natural, the organic. Colors morphed into reds, greys and blacks, and industrial imagery replaced the nudes. Not so much organic and natural any longer. “WORK HARDER!” appeared at one point, a mantra of modern life that we hear ad nauseam, at least subconsciously. Some might argue modern women hear it, or have to hear it, more than men.

Lights came up behind two women in red dresses, each dancing in her own window. Heels popped as arms reached up. Then one arm dangled, hanging from the shoulder joint with zero muscular restraint. The two women danced this in canon. At other times, they huddled against one window side. There was an undertone of captivity, a modern image of Rapunzel without the long hair. Yet there was no prince to rescue her. Ultimately, one dancer threw down a rope. Yet both dancers walked away from their windows. They didn’t take the exit available to them. Their absences spoke volumes. 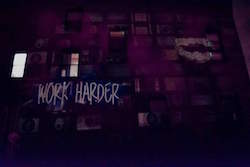 Soon other dancers moved in windows opposite of the still open windows, one with a rope still down the side. One was tempted to keep looking there to see if the dancers would come back or something else would happen. The immersive nature of the performance, things happening on all sides, was captivating – yet it had that one drawback; sometimes one didn’t quite know where to look. There was a fear of missing something. Maybe this is an unsolvable problem of three-dimensional, immersive performance spaces. Maybe it will take more experimentation in such spaces to find a solution.

Those dancers across the way moved with more freedom, even evincing sensual pleasure in their movement. Hips rolled and limbs extended with abandon. Before long lights faded down on them, however. On a wall perpendicular to them, a dancer lit in dark, muted tones (a grey color scheme) moved with even more freedom and abandon. There seemed to a lightning-like sparking, an electricity, in the lighting revealing her.

It slowly faded until she was seen no more. It was a faster, and even more overt, shadowing over of her in her fullest truth than that of the dancers just before seen. She was last seen standing strong, chest open and chin lifted. She stood in who she really was, but seems to have paid a price for it. What was the culprit? There was no tangible villain. That can make it all the harder to fight and overcome. 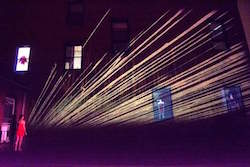 All the while, music underlaid these shifts. It was atonal, sometimes a-melodic, yet not gratingly so. It set up that atmosphere wherein something’s just not quite right – perhaps more menacing in its mysteriousness. Perhaps partly because of walled-in space, the acoustics were quite crisp and clear for an open-air space. More projections ensued, various objects and people in silhouette, on three walls of the space. All lighting eventually faded down, but the music continued to fill the space. It was a space in which audience members could experience their thoughts about the questions the performance raised, spinning around in their heads and pairing off to tango with another thought to move in a different direction.

In this age of nearly constant multi-sense overstimulation, being guided into only engaging with only one sense can feel foreign and uncomfortable – but in the end, truly be a gift. It can lead us to think back on big considerations such as where we’ve come and the road yet to come. That’s certainly a fitting frame with which to approach gender relations, and Callie Chapman did so head-on in SCALE. It left us with questions to ask, if we dare, and from that work to do. Onwards we move.