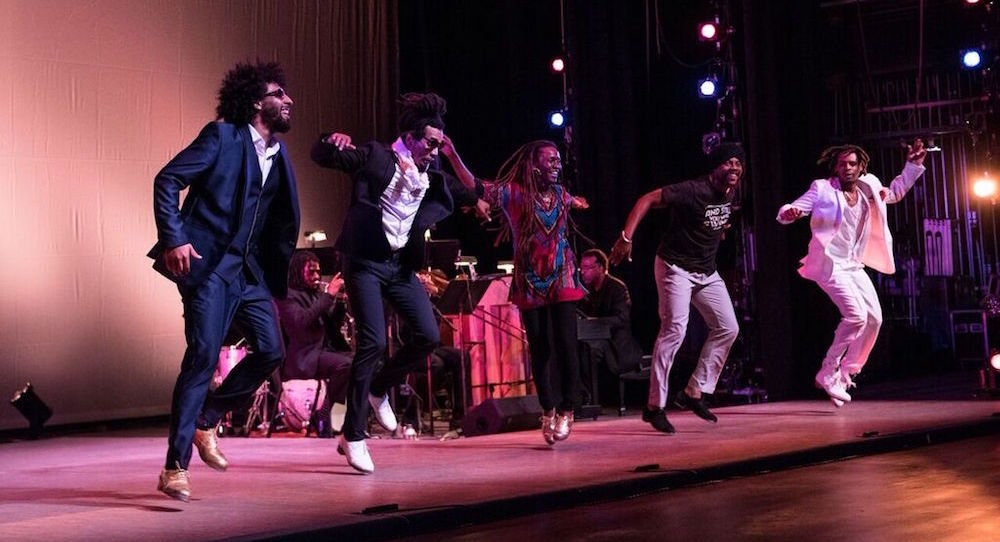 Even before the show began, the newly renovated Terrace Theater was full of excitement as dance lovers got a glimpse of the beautiful space for the first time. This evening’s performance of Lotus was only the second show in the Terrace Theater since it reopened, and the first dance program in a space that has historically been home to the more intimate contemporary dance programs produced at the Kennedy Center. Having seen many dance performances in that space in the past, it was thrilling to be among the first to see the reconfigured lobby and open staircase, complete with a suspended gold and amber sculpture. Entitled Chandelier, the piece was created by artist Dale Chihuly specifically for the Terrace’s reopening. The audience was definitely in the mood for a good time, and the powerhouse cast of Lotus did not disappoint. 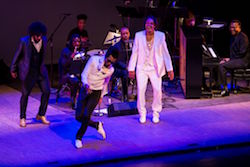 The program featured six legendary tappers who made their debut together in Bring in ‘da Noise, Bring in ‘da Funk 21 years ago. They were accompanied by the Lafayette Harris Jr. Quintet, who were on stage with the dancers for the entire program. The audience’s enthusiasm about the new look of the Terrace Theater just added to a happy, family reunion vibe of the show, which opened with a lively jam session featuring the full cast. As the performers took the stage one by one, the audience erupted in clapping and cheering for each one, as the performers greeted each other and the crowd with their thunderous sound and contagious energy. Omar Edwards got on mic and played the host of the party, explaining they were here to celebrate the African-American tradition of tap that has flourished despite many challenges — just as the lotus flower blossoms in the mud. Wearing a crisp, white three-piece suit, Edwards cut a striking figure while alternately bantering with the crowd and bursting into large, loose playful movements with big kicks and slides, punctuating funk-like rhythms.

As the other performers faded backstage, the party atmosphere wound down, and Edwards launched into a more intimate, autobiographical monologue about the impact of tap on his life. In a sort of call and response with the onstage band, Edwards’ feet conversed with the music in the space between his dialogue with the audience. A master storyteller — in word and action — Edwards tells the story of his mother who grew up in Liberia and never owned a pair of shoes until she was an adult. With a mix of tenderness and humor, he recounts the family legend of how his mother worked as a human scarecrow, barefoot and waving wildly for hours in the fields to protect the crop from birds and other pests. In honor of her experience, he slips off his shiny white tap shoes and offers up a brief but touching dance in his bare feet as a tribute to his mother. The delicate, intricacy of the sound created just by his bare feet in the silence was surprisingly moving and poignant. When the show ended about an hour later, this was the image that stuck with me — Edwards and his naked feet pounding that stage, giving voice to his mother’s story.

As Baakari Wilder entered the space, he built on the intimacy of the moment with his subtle, sparse tapping in conversation with his own recorded voice. As the voiceover speaks to the relationship between his faith and his art, both serving as agents of growth in his life, Wilder continues to weave a spell on stage with light, complex rhythms that seem to flow out of his heart as much as from his feet. Wilder was like a philosopher in tap shoes. Even without the context provided by the voiceover, his light, controlled movements and unusual rhythms gave me a sense of thoughtful introspection and humble gratefulness.

As his quiet solo came to an end, a projection series began, which featured the black and white images of African-American men and women to the mournful sound of trumpeter Joseph Jamaal Teachey. One at a time, the other cast members walked on stage and stood with their back to the audience, watching the projections with sense of reflective respect. With the full cast assembled once again, they began to speak as one voice in sound, even as they maintained their individuality of expression. It was a powerful statement of unity in diversity to see each of these masterful performers match each other sound for sound without sacrificing their own unique style or imitating each other’s movements. The moment then ended as it had begun with the performers watching the images on the screen behind them and making their way off stage one at a time.

Then, in near darkness, trombone player Reginald Cyntje and trumpeter Teachey rose from their seat in the band set to take their place in a shaft of light shining from the upstage right corner of the stage. The light created a pathway in which Joseph Webb’s solo unfolded with light, fast sounds that doggedly pressed forward as the voiceover spoke to Webb’s admiration for Harriet Tubman. In the recording, Webb talks about how Tubman’s willingness to “choose liberty over death to free herself and others” has motivated him as a man and an artist to persevere. On stage, Webb leads the two musicians through the shaft of light and back to their seats as the pathway disappears behind them and the whole stage is illuminated. The persistent, almost engine-like pounding of Webb’s foot work, in concert with the music and Susan Kilbourne’s lighting, evoked Tubman’s work as both the engine and heart of the Underground Railroad.

Changing the mood completely, Dormeshia Sumbry-Edwards slinks on stage in silhouette, wearing a striking red fringe dress and sparkling gold heels to lead a reprise of the party vibe that kicked off the show. She is joined by Jason Samuels-Smith, who is similarly dressed for the occasion in a sharp three-piece blue suit, gold oxfords and movie star sunglasses. Not to be left out, Derrick K. Grant joins this flashy duo to create a wall of sound that seemed far bigger than the three performers on stage. More than any other section of the show, this trio had the bravado and flash of a musical theater number, but, in keeping with the rhythm tap tradition, the dancers were co-creators of composition, providing complicated musical counterpoint to the band, while also exuding an air of playful flirtation with each other and the audience. This section of the show was definitely a crowd-pleaser, soliciting lots of hoots and hollers from the audience.

As the guys exited, Dormeshia’s voiceover echoed through the space, reflecting on tapping as a kind of therapy for her personally but also a responsibility to honor and sustain the art form for others. Unfortunately, her recorded voice and her powerful sound were not always a good mix, and it was sometimes difficult to understand the words of the narration over her patter of her footfalls. When the voiceover finally ended, the band kicked in, and, at that point, the audience seemed to be able to settle into the playful groove of Dormeshia’s joyful rhythms without the burden of trying to decipher words and sound at the same time. As the full cast joined her on stage again, both audience and performers seemed to relish the return of the full cast in that way that hanging out with your best friends is both relaxing and energizing. 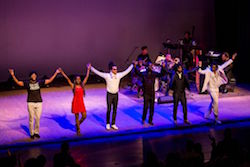 Before the inevitable big finale, two more solos rounded out the program. First, Samuels-Smith’s voiceover recounted his admiration for tap great Dr. James “Butter” Brown while he took the stage with his signature mix of risky slides, turns and kicks. Then, after a brief upbeat interlude featuring the full cast, Grant has the last word, talking about his commitment to “come into the room feet first” and “lead by example.” He took the stage with a bright, relentless sound, sprinkled with surprising jumps and slides that were as humorous in their timing as they were impressive in their difficulty. At one point, the big band sound of the music erupts into the very familiar licks of “Take the A Train”, and Grant makes a sort of tap joke by busting out some buffalos, sure to be familiar to any beginning tap student. The audience clearly got the joke, as folks around me laughed as they bopped along in their seat to tight, big sound of Lafayette Harris Jr. Quintet.

Finally, the whole cast emerged from the shadows to watch another projection series of snapshots of much younger versions of themselves on tour, on stage performing and hanging out backstage. With these echoes of the beginning of their professional and personal relationship shifting behind them, the six performers — longtime colleagues and obviously close friends — took the stage one more time for the big finish. Ultimately, this program was a celebration of those who came before them, as well as the beauty of the journey each of them have taken over the past 21 years. With the audience on their feet and clapping along, the cast of Lotus let loose the power of their instruments and pounded out a satisfying groove to close the show. And then, they returned for a couple more curtain calls, complete with tap battles because they seemed to not want to let the moment pass any more than the audience did. Hopefully, we won’t have to wait another 21 years to see these dancers take the stage together again, but, if we do, I would bet they will all still be tapping and ready to celebrate a lifetime in tap by then.