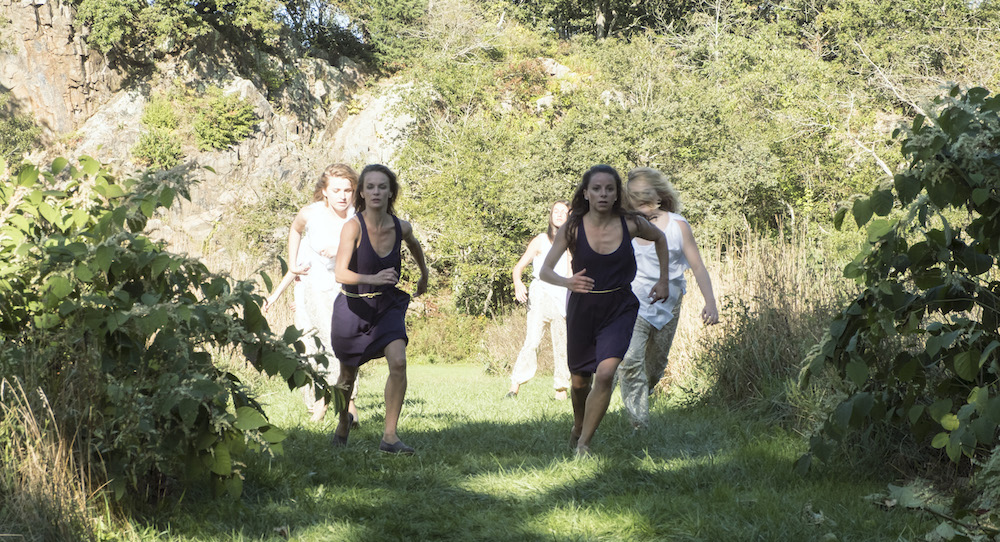 Site work certainly has its challenges – legal, logistical and physical safety aspects. Yet what can emerge in and from site performances can be more than worth the work involved to make them happen. Island Moving Company (IMC) is well known for its striking, breathtakingly beautiful site performances.

This is partly from the fact that the company truly makes the best of not having a home theater. Open for Dancing is an annual festival open to the general public, with performances in some of Newport’s most iconic spots. There are also classes, lectures, performance opportunities (with company dancers featured in performances) and more.

Performances took place at three different sites in Newport. One was Fort Adams, a fortress-like assemblage of structures built in the Civil War and designed to defend Newport if Confederate forces were ever to attack by sea. (At one point, Newport was bigger than New York City, until the latter grew significantly up and out.) The performance, Prelude/Circle/Passage choreographed by Mary Sheldon Scott, unfolded primarily in a semi-circular room (with a large circular structure taking up the center). 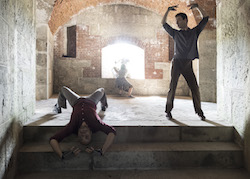 The red and white brick of the walls appeared faded by the passing of time, but still strong. The instrumental music of the music carried well through the space. It seemed to be, even mysteriously so, hallowed. Dancers began to move, primarily in orbit-like formations. This matched the feeling of the space well. Call-and-response sections followed, dancers split into two groups and one following the other with the same phrasework.

The movement further reflected the feel of the space, circular and spiraling, yet at some points angular. These seemingly contradictory qualities were married in movement, just as they were in the space. This occurred through attitudes, changing of levels, shoulder rolls and more. The dancers did not share eye contact, yet they did acknowledge each other through gestures such as a hand on another’s shoulder.

Lifts were another way in which dancers engaged with one other, and some were simply astounding. In one, a dancer was smoothly lifted in a stag-like shape. In another, IMC company dancer Glen Lewis maintained a stunning double-attitude shape as he lay horizontally in the air, three other dancers lifting him with ease and grace. He also repeated a lovely phrase with fellow company dancer Vincent Brewer a bit later, draping himself over stairs, turning to extend one leg out and lifting hips from feet and hands grounded.

All the while, the other group of dancers stood (with stillness, yet attention and strength) on the other side of a partition, while two other dancers made their home in a narrow, long window – sunlight streaming over them. Costumes reflected Celtic patterns in the ballerina’s dresses. Lewis and Brewer wore old-fashioned yet utilitarian slacks and button-down shirts.

Certain movements also reflected the geometry and functional movements of construction, such as shoulder rolls and a syncopated dip to the side with hands on shoulders (elbows pointing to each side).

Fort Adams was built predominantly by Irish immigrants, whose descendants still make up a vibrant community in Newport’s Fifth Ward.

With all of these things together, there was a sense of commemorating the brave men and women who came to this nation for a steady income and an overall better life – and in so doing, built structures such as Fort Adams, as well as helped build up this nation overall to be what it is today.

One aspect of the work as it was in the site that could have been refined was sightlines for audience members, given the partitions in the space and its circular shaping. Scott and collaborating artist Jarrad Powell demonstrated clever and creative enough use of the space that it seems they could, given more time and experimentation, come upon a viable solution. All in all, if audience members looked closely at the walls while exiting, small specks glistened. The beautiful orchestral music of the piece was still audible. It all came together to be almost spiritual.

The next work, Ghosts and Grapevines: Thoughts on the family histories of Newport by Thom Dancy, took place at Greenvale Vineyards (just outside of Newport proper) and was split into three pieces. In the first, dancers moved amongst the rows of grapevines. All but one of the dancers were masked, and they threw plates back and forth in between the rows of vines. There was a classic party dance feel to it, the movement precise yet also simply fun. 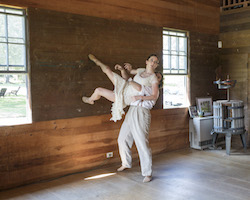 IMC in Thom Dancy’s ‘Ghosts and Grapevines: Thoughts on the family histories of Newport’. Photo by Thomas Palmer.

The dancers found this balance well, as well as managing to travel as far as the space and formations called for (in no way an easy task, the space as it was). Costuming of frills and petticoats increased this classical sense. Throughout, the view was magically picturesque, sunlight reflecting on the ocean with boats sailing to and fro. As the piece wound down, dancers began leading audience members to the site of the next piece, on the edge of the field of vines.

Here, Brooke DiFrancesco danced much of the piece in a solo, turning to and away from the rows of vines. Her movement quality and facial expressions conveyed constriction, and a desperation to escape it. Hold and release, as well as lovely extensions at various levels, helped create this dynamic. She moved away from and then toward the vines, as if grasping on to something, anything, for support. Toward the piece’s end, other dancers (still with masks) draped what appeared to be a wedding dress over her.

She then rolled down the hill, her petticoat wires collapsing and re-expanding. It seemed as if any control she had was gone. Yet the power of her spirit was somehow still felt. The sad weight of the scene was in stark contrast to the gorgeous night, a sunset in perfect temperature and not a cloud in the sky. Masked dancers again led the audience to the next (and last) site – inside of a barn. Tara Gragg and Shane Farrell offered a soul-stirring duet in this last piece.

They started at one wall, and stayed there for a bit, movement going up-down and side-to-side. A beautiful phrase kept re-emerging – a sweep to the side into a passé, to a fall, turn or other extension. Another motif was Gragg slipping out from under Farrell. As they moved away from the wall and into the middle of the room, movement became primarily front-and-back, implying action forward and the resistance toward it. In the context of all this put together with the last piece, these were brides-to-be not ready to commit. The power and will of both their spirits was palpable.

The last piece, en masse by Teresa Fellion, took place in Ballard Park. It’s an open field with a quarry wall and a large circular area of lush green grass, surrounded by trees. Live music with Celtic flare filled the air. Some dancers wore blue toga-like dresses with a sash, Isadora-style, and others a white top and gold pants. They swooped, reached, pliéd, extended and more. Arms opened into a cactus shape, hearts lifted to the sky. Their energies rippled through the sky and earth. The sense of divine feminine power was tangible.

At about mid-way through, dancers signaled audience members to walk inward and encircle the cast. Some were given simple instruments of dried beans in a jar. It was an especially intimate way of audiences partaking in the dancers’ movement. Two IMC company dancers, Lauren Difede and Katie Moorhead, broke through the circle. A contact-improvisation-inspired duet commenced. Their grace and strength was spellbinding. They rose to higher level, and the whole cast moved away down the path leading into the field.

One rose, lifted to the sky by her fellow dancers. She descended, and they danced away down the path. “Goin’ home, goin’ home,” the musicians sang. All together, the religious or spiritual allusion to returning to a better place after this life was clear. The piece showed us the power of life in our body, and the blessings waiting for us as they move from this Earth (whatever one’s conception of that may be).

In this way, just as occurred in the prior two pieces, the power and beauty of human spirits came through in beautiful dancing and effective usage of performance sites. Through much experience with site work and many talented, creatively courageous people involved, IMC has learned how to make this magic happen. Brava, brava, encora, encora.