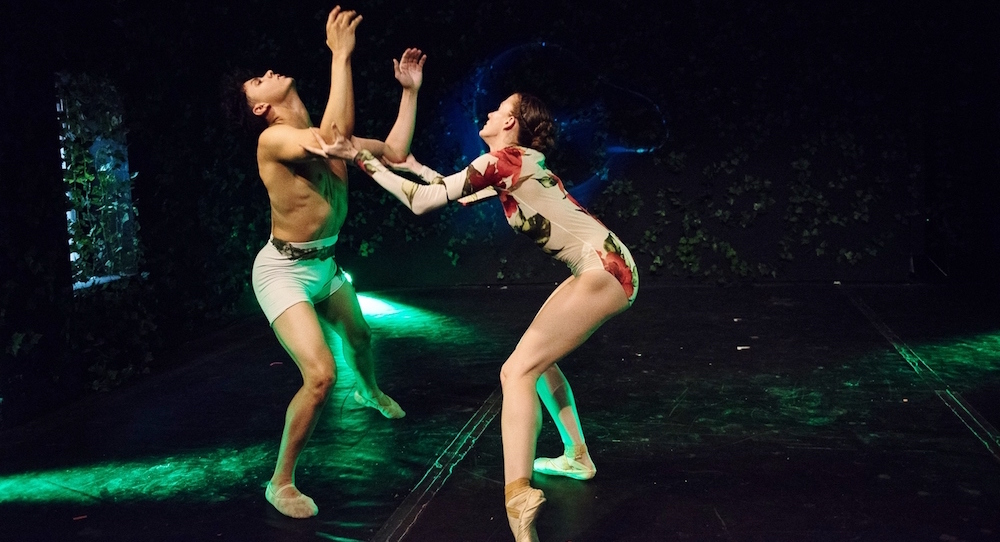 It might be a grand claim, but nothing can unify quite like art can. 1940s Hollywood musicals, for example, offered light-hearted and authentic joy to a country caught in the throes of a world war. When well-crafted, symbol and metaphor can express universal truths in ways that all people can enjoy experiencing. Blending various artistic media with skill and clear intention, something more and more of interest in contemporary art, can increase that successful relatability. Arch Contemporary Ballet’s Hues of Memory achieved that through an intriguing, well-crafted translation of poetry into movement, offered with very clear and intentional inclusivity. 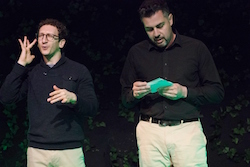 Luis Pons’s poem of the same name illustrates yearning and heart-stricken memory of loved ones. Nautical themes of wind, waves and sinking to depths also abound. Pons read the poem at the beginning of the performance, after an introduction from Sheena Annalise, choreographer and founder/director of Arch Contemporary Ballet. Both were signed by an American Sign Language (ASL) interpreter. As a second layer of construction in the work, in addition to poetry translated to movement, Annalise made the piece accessible to the deaf community in every way possible. As she explained in that introduction, the live music (by solo violinist Isabel Epstein) was projected visually on the backdrop. The dancers signed in and through their movement.

They did so skillfully; without more than the most rudimentary knowledge of ASL, one could see that the immense challenge of speaking a new language – one that is predominantly physical – did not impede their execution of Annalise’s choreography. They moved with both strong rooting and upward lift. Their spines were like a viscous fluid, a molasses that can somehow shift through space at the snap of a finger. These qualities convey more than physical skill – they demonstrate a trust in oneself, and in one’s partner, to release yet maintain control. 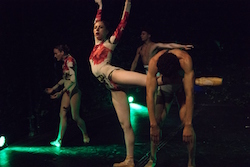 Within that choreography was fresh, innovative and insightful phrase-work. It was at one level visually impressive, even breathtaking. At another, it was complementary to the emotional content and depth of the overall work. Apart from the actual signing, the shapes of the dancers’ larger kinespheres embodied the fluid geometric qualities of ASL – smooth shifts in and through the linear and the circular. Wave-like qualities, both in the dancers’ bodies and with changes in levels of space through overall phrases, underscored the poem’s nautical themes. Gorgeous long-sleeve leotard costumes had bloomed roses, adding another reference to the natural world. Those also helped build the dancers as beautiful flowers of long-ago love.

In addition, Annalise’s works often offer novel takes on partnering, and this piece pushed that further. One meaningful moment, for instance, was with two dancers – back-to-back and elbows hooked – sinking to the floor. Even as we look away from each other, connection and memory of the other can remain. In another such moment, a dancer was supported in another in a strong, lifted arabesque. She then melted into her partner through her torso, her lower body unchanging. It had that effect that well-constructed dance can bring, how it can pull you in by your very physical body – a felt experience that words can’t quite describe. 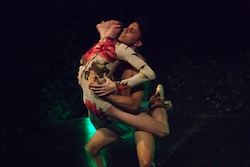 Also effective were well-crafted repeated phrases. These further bolstered the emotional power of Pons’s poem – a sense of an unchanging reality, a living in memories of past love. One repeated phrase, for instance, was an extension into a turn wherein the working leg snaked through passé and down the standing leg – throughout the turn, such that it seemed like a rope winding around a pole. Even this offered nautical imagery – thus, the many levels of nuance and meaning in the piece’s movement.

As a level of exploration and development for the work, these iterations of phrases could offer further variations within their base structure. There is certainly enough complexity within the phrases in which variation can be built. Another territory to explore is more range of tempo; much of the wonderful, rich live music was quite fast, and the dancing followed that. Delving into more movement of slower tempo could further support the emotional content of the piece, of a stasis in being stuck in memory. It also seems as if the dancers have the control and intuitive sense to make magic in such slower movement. 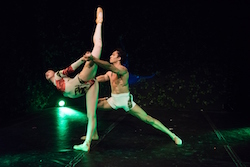 Overall, Hues of Memory did offer magic – that of art’s power to unify us. We can share in aesthetic and auditory wonder whether we be hearing or deaf, regardless of our race, class, gender or religion. Music, movement and literary treasure can join to become something in which we can all join. In a time when the world can feel more divided and confusing every day, that gift within art is more valuable and important than ever.