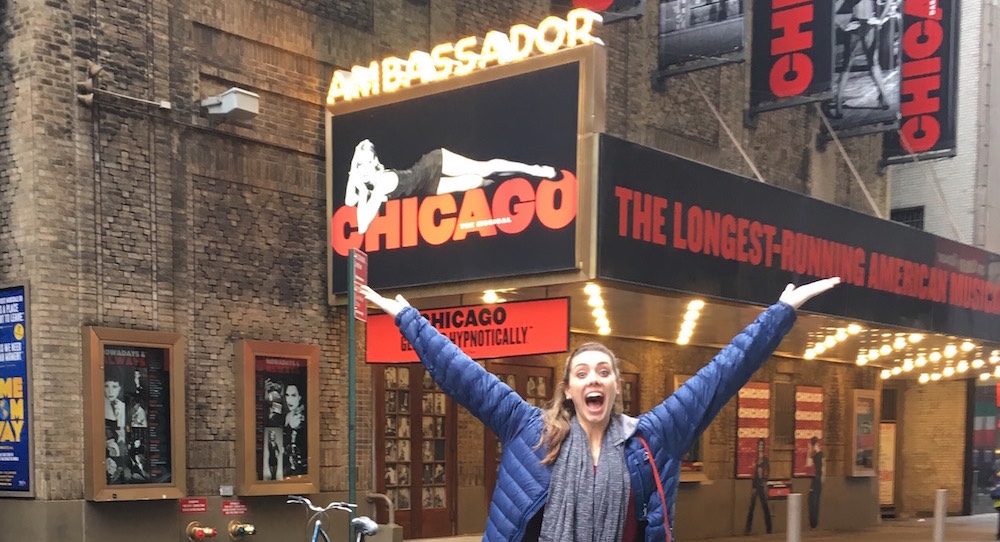 Imagine: One week you spend your Friday night babysitting for a little extra cash to pay for dance class, and less than a week later you’re making your Broadway debut in one of the most legendary dance musicals of all time. Sounds like a dream, right? Well, that dream came true for Jessica Ernest, who recently landed the role of Go-To-Hell Kitty in Broadway’s longest running American musical, Chicago. From babysitter to Broadway performer, Ernest’s life changed almost overnight. Her exceptional story is every dancer’s dream: that with passion, hard work and a little luck, the Great White Way is not so out of reach. In the midst of her magical first week of performances on Broadway, Ernest shared her exciting journey with Dance Informa.

Tell us a bit about yourself. Where are you from, and how did you begin dancing and performing? What brought you to NYC, and what have you been up to (before Chicago)?

“I am from a small town in southern Maine. I would bring home all the sheets from school about extracurricular activities to participate in. My mom wanted me to play basketball; I wanted to do ballet — nothing but ballet! So I started taking ballet lessons, and eventually that lead to school plays, private voice lessons, jazz class, community theater shows, and I was hooked for life. All that led me to get my BFA in Musical Theatre at Point Park University in Pittsburgh, PA.

Up until now, I’ve been a singer on a cruise ship, a showgirl in Las Vegas and a performer at a bunch of regional theatres in Maine, California, Florida and Montana. Last year, I traveled around the country as Ulla in the national tour of The Producers.” 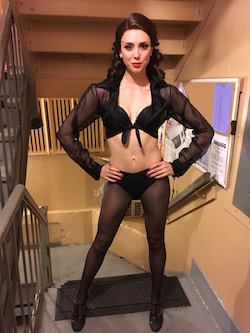 How did you prepare for the Chicago audition? Did you think it went well?

“I didn’t have much time to prepare because it was a ‘last-minute replacement’ audition. But I felt really great about the audition after I left. I had just returned to the city after a refreshing weekend at home in Maine with my family, and that always has a way of grounding me. But I am so used to rejection in this career, that I have started to try my hardest to leave everything in the audition room. There are no answers in this business; the majority of our time is spent waiting and wondering. So, I made sure I left feeling like I did my absolute best.”

Where were you when you got ‘the call’?

“I was in my apartment with my boyfriend and my roommate. It was late afternoon the day after the audition, and I was just enjoying my lazy morning when I got a call from an unknown number. I don’t normally answer phone numbers I don’t know, but I answered anyway. And it was one of the best calls of my life! It reconfirmed that everything I’ve been working toward wasn’t a waste. That I was on the right path, and that persistence and perseverance is key. Of course, when I got off the call, I threw myself on the bed and cried tears of joy and relief! Then I called my mom.”

What role do you play/cover in the show?

“I play Go-To-Hell Kitty, and I understudy the five ‘Cell Block Tango’ girls.”

How did rehearsals work? How long did you have to rehearse?  Was it nerve-wrecking to be thrown into a production where some cast members have been performing it for many months or years?

“Rehearsals were amazing. David Bushman, our dance captain, made rehearsals fun and informative. He knows the Fosse style so well and was able to impart all his knowledge on to me. I feel so lucky to have been trained by his extremely capable hands. I had only seven rehearsals and one day of rehearsal with the cast before performing on that Broadway stage. It was a complete whirlwind. But like someone said to me, ‘You’ve trained all your life for this moment. Just go and do it!’ And when the lights came on Thursday, April 13, I was ready.”

Fosse choreography is deceiving. It looks so simple but is incredibly detailed and stylized.  What’s it like to perform this choreography every night?

“It’s hard work! Watching it, the performers make it look so fluid and easy, but doing it correctly requires strength and an internal fire. And that isn’t easy! I have gained muscles in places I didn’t even know I could have! But feeling the energy that the whole cast brings on stage makes all the difference and makes the impossible feel possible.”

How did the cast treat you when you joined the Chicago family as the newbie?

“My cast is incredible! They have made me feel so welcome and a complete part of the company. I had my parents and some very close friends in the audience for my debut, who also made me feel so special. My dressing room station was flooded with flowers and treats. I felt like a star!”

What was the hardest or most challenging part of this process?

“I think it would be the process. In all the shows I have done in the past, I have been a part of the show since the first rehearsal (on to fittings, tech and then finally opening). But this show was different. The first time I ran the show with lights, costumes, wig, microphone and full cast was for a paying audience and was my Broadway debut! It was challenging but so worth it!”

What was the best moment of making your Broadway debut?

“Coming out of the stage door and seeing all these people who have helped shape me and my career was one of the most amazing feelings. I am so grateful for what I get to do every night.” 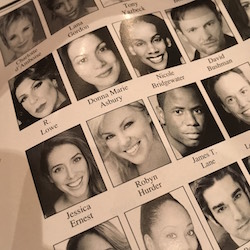 How does it feel to be a part of such an iconic dance show — and the longest running American musical at that?

“It’s amazing. Knowing that this show has been running for 20 years and that I am now a tiny part of this incredible masterpiece gives me a whole new family. I am so looking forward to meeting all the people who come into the show in the future and knowing that I am connected to such a legacy.”

Before making your Broadway debut, you led the life of a gypsy — performing professionally (regionally, on tour and in NYC), dancing and modeling at special events and babysitting. Your life changed almost overnight. Are you pinching yourself?

“I’m totally still pinching myself. I get a grin on my face every time I walk under the marquee and into the stage door. It is a dream come true! Never give up. I am living proof and inspiration that even after years of rejection and struggling, our dreams are still attainable. It isn’t all easy or fun or pretty, but if you put yourself on the path to success, visualize it and work hard, it will only take time for you to get there.”

For tickets to see Jessica Ernest and the rest of the cast in Broadway’s Chicago, visit chicagothemusical.com.