In February, at the conclusion of its Sleeping Beauty performances, New York City Ballet (NYCB) announced the promotion of eight of its company dancers, including then Soloist Russell Janzen to the status of Principal Dancer. Janzen, who first joined NYCB in October 2007, as an apprentice, had just made his debut in the role of Gold.

Dance Informa recently connected with Janzen to learn more about his calling to ballet, what his training entailed, the roles he’ll be performing this spring season, other projects he’s looking forward to and what advice he has for burgeoning dancers.

Russell, when did you first know that you wanted to be a professional dancer? You reportedly started dancing at age six. Was it instantaneous? 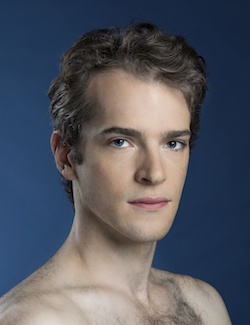 “If you ask my family, they will say I always wanted to be a ballet dancer when I grew up. And I did, but I don’t think I really knew what that meant until I came to a summer intensive at the School of American Ballet (SAB) when I was 14. Before that, ballet was my ‘thing’. I was one of the few boys in my academic school who danced, which I liked. But I remember being in class at SAB with Peter Boal, and we were learning the first variation from Balanchine’s Theme and Variations. That’s when it kind of clicked for me – what it would mean to really be a dancer. It was technical; there was style; I felt like an individual, and it was hard work. I wanted more of that. Going to SAB was a step toward making a bigger commitment to ballet and to a way of dancing. I think it was really during my time there that I made the decision that it was something I wanted to pursue professionally.”

Was your family receptive to you pursing dance? Did you have to overcome any obstacles to chase your dream?

“My family was so receptive and supportive. It was 100 percent my decision to start classes, to commit to it seriously and to pursue dance professionally. My parents, and also my sister, went along with it and supported me but would have been just as happy and supportive had I chosen something else to dedicate myself to. I have been very fortunate in that there was very little keeping me from dancing.

In fact, I received a huge amount of help. The Rock School gave boys a free dance education. Bo and Stephanie Spassof, along with my other teachers there, continually gave me encouragement and more intensive training. Then, at SAB, everything went very smoothly.

Since joining the company, I’ve been injured a fair amount and feel like I’m always dealing with something, but most of my colleagues have similar experiences.”

As you’ve mentioned, you trained at The Rock School in Philadelphia before eventually enrolling as a full-time student at SAB, the official school of NYCB. Can you share more about how your time at The Rock School was formative for you?

“At The Rock School, we had a real range of teachers, and I was exposed to many different styles. The teacher who shaped my experience the most was Chris Flemming. He used to terrify me because he was so demanding, but he pushed me to move faster and further in a way that really benefitted me when I moved to a Balanchine school.

Also, thanks to his partnering classes, I have never been afraid to partner. Now I do a lot of partnering, and I think I owe my success in that area in great part to his classes. He pushed us to do pretty challenging things, and he really seemed to have confidence that we could all do it.”

On that note, who were some SAB instructors who also inspired and challenged you?

“Nikolaj Hübbe was a big inspiration. Not only was he a wonderful and demanding teacher, but I was also watching him perform regularly, and he was a phenomenal dancer. He was elegant, stylish, powerful and understated – all things I aspire to in my dancing.”

You were first welcomed into NYCB as an apprentice. Now, nearly 10 years later, you have been promoted to principal dancer. Congratulations! How does that feel?

“It feels amazing and at times absurd. In many ways, I’ve been working toward this for a long time, and now that it has happened I sometimes have this nagging thought that I really shouldn’t have made it here. But overall, I’m thrilled and very proud to be in such great company.”

What was the moment like when NYCB’s Ballet Master in Chief Peter Martins announced this prior to the February 19th matinee of The Sleeping Beauty?

“It was a very nice and low-key moment when Peter told me. I was called in to have a meeting in his office after my rehearsals for the day ended. He sat me down and very matter-of-factly told me he was promoting me. I haven’t had many opportunities to speak with him for any length of time about my career, and it was great to have the opportunity to thank him and to tell him what about this last year (in particular) I really enjoyed.

After I left his office, I started crying. It was a bit overwhelming. The first person I saw was Kristen Segin, member of the corps de ballet, who I’ve known since I was 11 or 12 at The Rock School. We had a pretty emotional moment together.”

As a principal, have your responsibilities or freedoms in the company changed?

“The reality of my days hasn’t changed all that much. I have the same repertory as before the promotion. In some ways, I feel lighter in rehearsals. Maybe I feel like I have more ownership over my place there? But it has also brought along a fair amount of insecurities and pressures. I really want to live up to what I think it means to be a principal dancer in this company, and sometimes that can feel impossible.”

Now that you’ve reached this remarkable milestone in your career, are you setting any new goals for the future? Both artistic and otherwise?

“I don’t have many long-term goals right now. In the past, setting them hasn’t helped me much. This season is challenging for me, and I’m doing a lot of parts that are outside my comfort zone.

My goals right now are to get out on stage and be in a headspace where I feel free to dance as myself – to leave the doubts about whether or not I’m right for the part behind.

I would also love to work with all different kinds of dancemakers – people who will challenge my idea of what dance is and has been for me. I guess that’s a long-term goal.”

Do you have any tips or advice for young boys looking to follow in your footsteps one day?

“I heard Teresa Reichlen [fellow principal dancer] say this to someone once, and I thought it was great advice: ‘Make sure you love it. Ballet is hard emotionally and physically, and it’s not worth pursuing unless it really makes you happy.’

That, and put in the extra work. If you’re feeling uncomfortable with a step, practice it on your own and don’t be afraid to ask for help. I grew a lot as a dancer when I wasn’t busy as a younger corps member. In my free time, I asked some of the principals to coach me in different roles, and that was a huge help in keeping me strong and motivated.”

Finally, you and the entire NYCB company are currently on stage at Lincoln Center through May 28. What roles can fans see you in this season?

Wow! And lastly, are there any other projects you will be working on this summer?

“Outside of work with NYCB, I’ll be dancing with Stephanie Williams from American Ballet Theatre in Emery LeCrone’s program at The Joyce. Aside from that, I think it’s all NYCB this summer, both at The Kennedy Center in Washington, D.C., and the Saratoga Performing Arts Center in Saratoga, NY.”

To keep up with Russell Janzen and NYCB, visit www.nycballet.com.