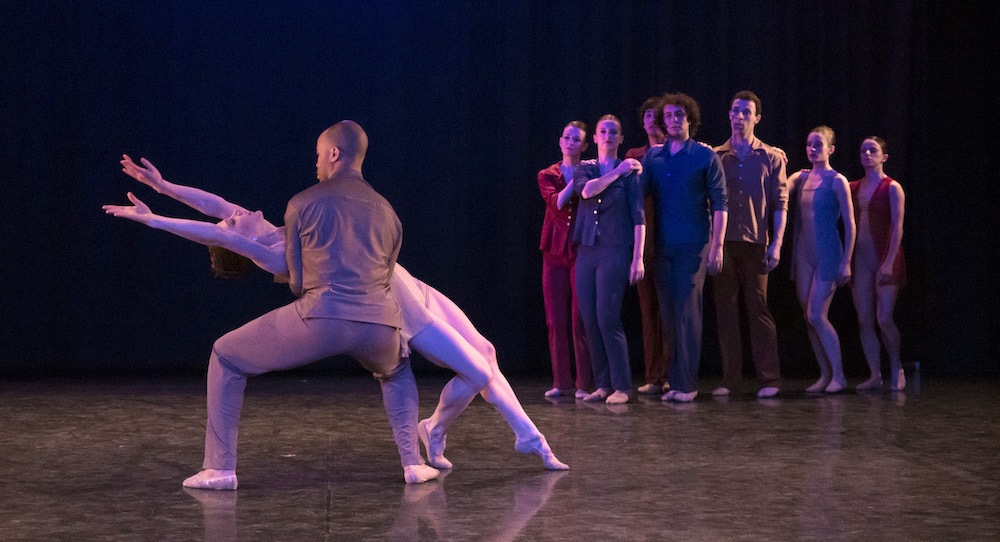 On the one hand, there’s diversity – the existence of varied ways to be and act. On the other, there’s unity – separate entities acting and being in cohesion and harmony. The two modes are not mutually exclusive, however, because unity does not necessarily mean conformity. Diverging ways of being and acting can join harmoniously, and thus be unified. We’re now seeing that effect in concert dance, generally speaking, with classical and contemporary elements sometimes blending and sometimes living side by side. 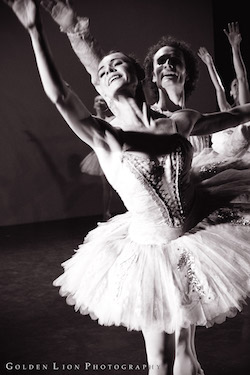 Kat Nasti, director of Green Street Studios in Cambridge, Massachusetts, expressed that point as she introduced the dance collective’s Ballet Showcase. The show is the first of a series of genre-specific concerts that Green Street will present over the coming months.

The show included works in the ballet idiom ranging from classical to neoclassical to postmodern with balletic inspirations. The first of these pieces, Mama Belly choreographed and performed by Tai Jimenez, was a striking exploration of motherhood.

One could interpret that exploration as largely commentary on sacrifice – perhaps some of that a loss of part of one’s identity – within the motherhood experience. Jimenez moved gracefully and poignantly. She often initiated movement from the hips, elbows and wrists with striking subtlety. Costuming and lighting complemented her body’s building of an almost ominous atmosphere. A floating, yet earth-grounded piqué turn – as one of the few overtly technical movements in the piece – left one craving more fluid blending of balletic movement with that in the postmodern, release-technique idiom.

Similarly postmodern in some qualities was a following piece, an excerpt of Jorma Elo’s Slice to Sharp, performed by Boston Ballet II’s Thomas Davidoff and staged by Anthony Randazzo. It had a much more athletic energy, however. The work – and Davidoff’s commanding delivery of it – reminisced that wonderful scene in the ballet film The Company wherein a male dancer, alone in a Cathedral-like space, moves quickly and powerfully. 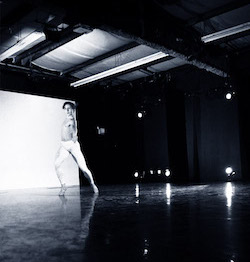 Davidoff danced with an incredibly captivating way of maintaining a spinal snakiness through some very technical and complex movement. This reviewer, as a Boston-based critic, looks forward to see where he will go in the overarching Boston Ballet structure. Yet the movement was so fast, so powerful, so spectacular, that one might crave more leveling of speed and physical energies; when something is constant, from lack of opposition, it comes to mean less.

There we had postmodernism. Jazz dance also made an appearance, with SundanceX’s Caprice (from Choreographer and Artistic Director/Founder David Sun). With vocabulary such as parallel passés, layouts, and even a Fosse-style Italian pas de chat, the piece was certainly full of capricious and jazzy fun. It offered a Balanchine-esque twist on classicism delivered with flair and lots of fast footwork. Bright costume colors, a different one for each dancer’s unitard, added to that sense of fun and flair. The dancers executed those difficult allegro sections, as well as slower sections with sustained extensions and turns, commendably.

On the other hand, one could wonder what the skillful choreography – and its execution – might look like if the dancers took more risk with it. Releases to the floor felt very controlled and safe, for instance, lacking drama that might have been compelling (with the exception of one dancer in a yellow costume). Perhaps the young dancers, with impressive technique for their apparent ages, are at a stage where it’s either technical command or a daring approach to their dancing. They show much promise and potential. In any case, Sun made good use of levels in space and stage sections, to create a pleasing stage picture. 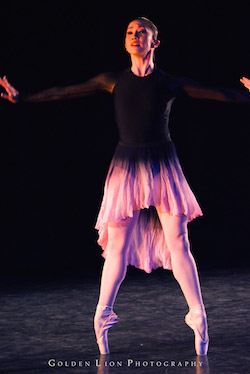 The building of atmosphere in Reverie also significantly contributed to the experience of the piece, along with skillfully designed, tenebristic backlighting (lighting design by Stephen Petrilli). Kevin Jenkins’ choreography offered something smooth and luscious, the two dancers (Beth Mochizuki and Ruth Whitney) rolling wrists and shifting their heads with graceful turns and extensions. Ballet buns, and the long sleeves as well as knee-length flowing skirts of their dark costumes, enhanced this simple yet powerful movement.

There was Mark Morris-like joyful ease echoing through it all. Adding to that quality, the instrumental string music, a solo violin lilted just as did the movement. All in all, all of these elements came together to create an aesthetic experience not to be forgotten. Yet a sole critique is a desire to see the dancers interact more. The soulfulness of their dancing apart, and that of the relatively rare moments when they joined, begged the question of what that would have to contributed to the piece. With that, the piece might have been an even more striking, memorable, and breath-taking experience to take in.

Then came the finale work, Island Moving Company’s Memoria y Vidrio, choreographed by Rodney Rivera. A fully appropriate title, as the emotional content was vivid enough to connect with memories in each audience member. With gaze, facial expression, movement quality and way of interacting with other dancers, the cast created an emotional – yet not melodramatic – experience of dance artistry. Also contributing to this experience was Rivera’s clever, innovative formation-making.

In one section, for instance, a line of all-male dancers lay on their back far upstage, with one arm extended to the sky. The simplicity effectively contrasted virtuosic movement happening center stage. In a moment more subtle and drama-driven, one (of the three total) ballerinas lay in fetal position. She held  two male dancers’ ankles to be slowly, gently moved (it was not as aggressive or violent as “dragging” would imply). 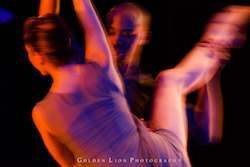 The stage picture then spoke many thousands of words; something in it seemed to have connective tissue to the millennia of loss, love, yearning and hope for a better future within collective human experience. She rose, however, as did other dancers executing similar level changes through (and right within) gracefully-constructed phrase-work. It all seemed to echo Maya Angelou’s poetic line, “And still I rise…and still I rise.” To fall, then rise again, is not solely of the past or of the present.

Styles of dance, classical to modern to postmodern, do not have to be either. Memoria y Vidrio, along with other commendable works in this program, proved that to be true. They can interweave, walk side by side, and be in dialogue. It can all be part of the crucial observation and commentary that art can offer us. In a time when the values diversity and unity sometimes seem at odds, when we sometimes struggle to reconcile divergence and convergence, let us remember – as this program illustrated – that they can indeed be as one.