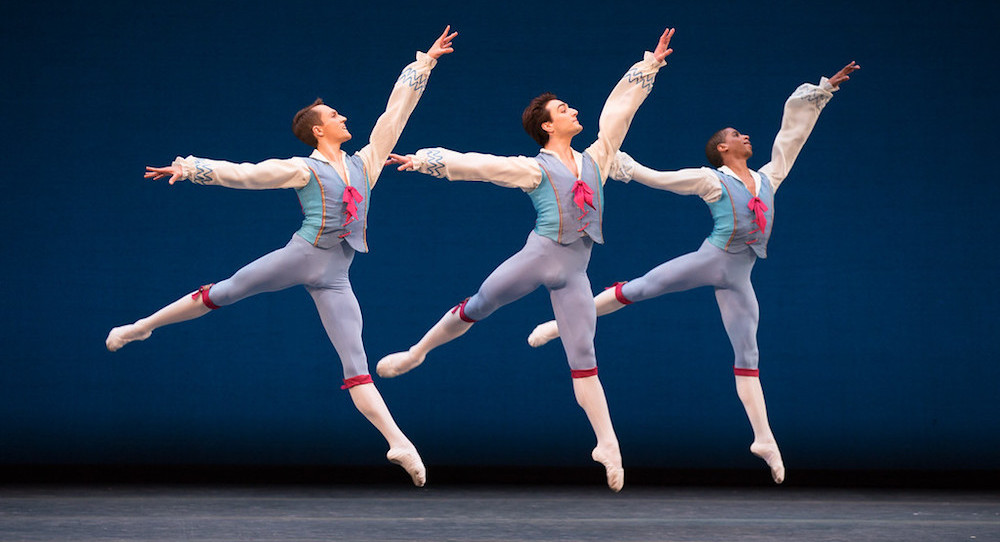 “All’s fair in love and war,” they say. One could add art to that – meaning that, if well-crafted and intentional, all artistic approaches can have value. Given the infinite possibilities of the human body and its blending with other artistic mediums, that’s especially true of dance. Some dance companies exhibit the versatility and purposeful way of working that can allow them to offer work in any artistic approach, with grace and style. With Wings of Wax, Boston Ballet once again demonstrated that they are one such company. 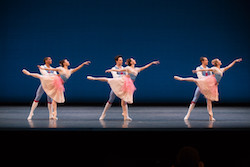 The first of three works on the program was Donizetti Variations, a rather classically-styled George Balanchine re-staging. The visual aesthetic of baby-blue, white and pink (for the ballerinas) costuming and a matching baby-blue backdrop built a harmonious, pleasant foundation for the dancing to come (costumes courtesy of Miami City Ballet). Casting of three male dancers and six ballerinas allowed for orderly formations of triangles, lines of pairs and other numerical explorations. Frequent shifts in those formations, as well as tempo, brought intrigue and a sense of fun to this orderly quality.

Characteristic of Balanchine works, allegro was breakneck speed. In more adagio sections, lines and extensions were fluid and pulsating with energy. A section containing both those qualities featured one of three pairs in which the first ballerina turned, offered an arabesque and penché, and the two other pairs followed her. Also characteristic of Balanchine works were tongue-in-cheek moments hinting at post-modern trends such as meta-analysis (art commenting on itself) – including one of a ballerina seemingly stubbing her toe, checking her pointe shoe and heading back to her place in formation. A rather classical work overall; yet more modern moments were certainly fair game, and added to the delight that the piece offered.

The following work was the namesake of the program, Jirí Kylián’s Wings of Wax. Catching one’s eye immediately was an upside-down tree, its many branches bare. Low lighting and black costumes contributed to an overall stripped-down Spartan quality. A roving searchlight circling overhead contributed to the overarching mystery. At times, the dancers came quite close to the lowest branches of the hanging tree, and the allusions to the tale of Icarus and his melting wings were quite clear. Yet those allusions were more layered and nuanced than just plain reference, perhaps a re-framing of the old tale for the complexities of the modern world.

Part of that re-framing were references to the qualities of human interactions. Dancers shared and resisted each other’s weight, skillfully manipulating the pulls of kinetic forces. Pairs with crossed wrists had one dancer seemingly skating across marley in a low, juicy plié, for instance. There was both a pull toward and a resisting of the other. Short of any social commentary, this use of weight and gravity was beautiful to behold. There were other such gorgeous phrases that could have offered powerful social commentary but are quite valuable apart from that.

One such moment was with a group of dancers slowly walking in place while another danced athletically and quickly in front of and around them. We often move at different speeds, and sometimes miss each other. But, inevitably, we share space and time. Yet this section was truly something to experience without such an interpretation. The work concluded in a similar way, with a male-female pair wrapping around each other from chest to head, folding in and then releasing to switch sides. They continued to alternate sides with that movement as the curtain fell. It was a mesmerizing ending to experience, and also one potentially rich with meaning on the cyclical nature of our lives and the relationships within them. The piece brought us far into the post-modern realm than the first dared to venture. Yet each work offered something special of its own.

The third and last work on the program, Alexander Ekman’s Cacti, was more post-modern yet. The meta-analytic focus was apparent from the beginning, with commentary on the way classical and contemporary artistic forces tend to clash but can then reconcile through compromise and collaboration. Musicians emerged from the shadows as dancers rose, moving with intriguing and unconventional port de bras patterns. Fog rose from the shadows and up into the dimmed lights (lighting design by Tom Visser). This mysterious atmosphere was joyous and energetic, rather than angst-ridden. Body and floor percussion, for instance, contributed a captivating rhythm. Supremely athletic movement phrases were just as captivating.

Other moments in tableau offered compelling contrast to that frenetic, athletic movement. One picturesque moment, for instance, was one with all dancers kneeling, reaching an arm out at shoulder height while all looking in that direction. The general level in space rose as dancers raised their white planks, to lower and raise them again. More athletic feats graced the stage as dancers leapt up and disappeared behind their planks. Meaning deepened as narration re-commenced; the speaker identified these white planks as “ivory pedestals” and referenced how artists have lived on, and hid behind, these pedestals.

With the racial tension in America of recent times, one can’t help but absorb this is as commentary on how the arts – in access to their creation, education, and viewership – is part of that necessary dialogue on race. Yet it all steered clear of too heady, serious or proselytizing. “They are the cacti,” the narrator asserted, with many possible interpretations, yes, but just unexpected and seemingly nonsensical enough to have audience members laughing. All of that aside, the beauty of dancers slowly walking – as if in a walking meditation, in low lighting – was breathtaking. The dancers then used their “ivory pedestals” to create what looked like the front face of a building. Race as construction? So one can surmise.

Yet it all remained lighthearted enough to stay short of plunging audience members into a discussion on race. Key in that levity was a duet with two dancers seemingly in rehearsal; more voiceover narration offered their tongue-in-cheek dialogue while they worked through certain movement phrases. The two dancers resisted and folded into each other as naturally as walking. Their comfort in their partnering likely helped the audience feel fully comfortable – comfortable enough to laugh. From amusement, to awe, to curiosity, to deeper thinking, art can offer it all. And Boston Ballet is a company that has the openness and artistic command to explore all of these possibilities. It’s all fair game.