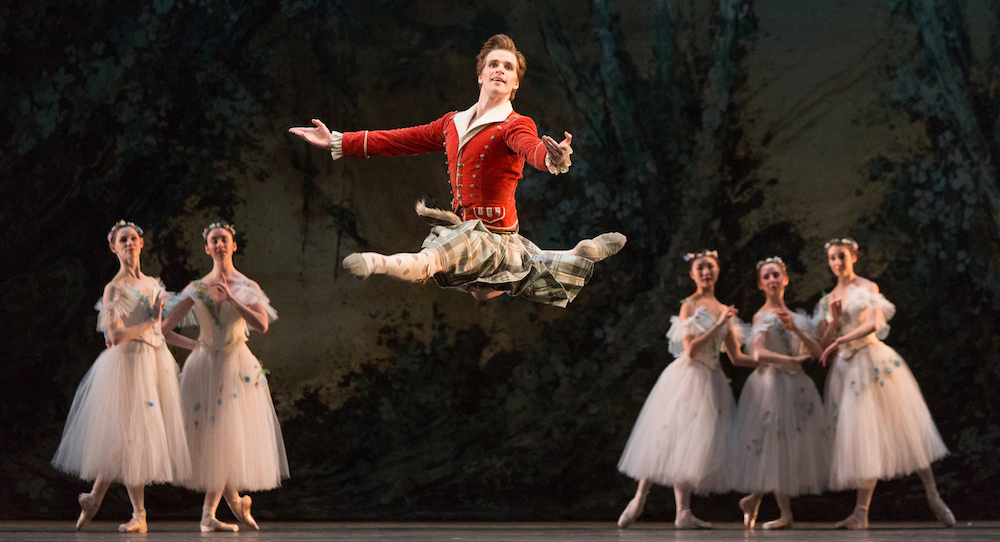 In 2016, Harrison James was named a principal dancer at The National Ballet of Canada after only three years with the company, which boasts 60 dancers and 10 apprentices. Hailing from the small town of Paraparaumu, New Zealand, James has come a long way, from a more rural upbringing in the “Land of the Long White Cloud” (as the indigenous Maori call NZ) to the metropolitan city of Toronto, filled with soaring skyscrapers.

Gaining rave reviews from critics and the Patron Award of Merit from the company’s Patrons’ Council Committee in 2015, James has been recognized as a formidable and highly skilled dancer, one who brings true artistry to each performance. 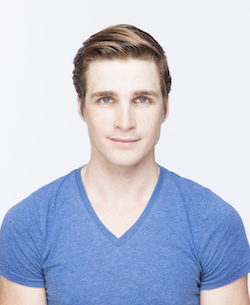 Dance Informa recently caught up with James to learn more about his journey to where he is today. Here, he shares details on his training, his favorite ballet characters, his upcoming roles and advice to those looking to pursue dance as a career.

Hi, Harrison! To start, can you share when and where you began dancing?

“I was always dancing as a child, not long after I could walk my mother would claim. Some of my earliest memories include picking out costumes from our dress-up box and insisting that any member of the family who was available watch while I improvised to the latest piece of music that had caught my fancy. When I was five, my parents decided to channel this into ballet classes at a local school called Alison Pond Dance Academy, where we trained in the RAD (Royal Academy of Dance) syllabus and took level exams each year.”

In New Zealand when you were growing up, did you feel free and supported in pursuing ballet as a male?

“My family was always behind me every step of the way. Of course, kids being kids, I was teased at primary and high school about that part of my life, but it never had me questioning whether or not I wanted to continue dancing. The schools themselves were incredibly supportive of my passion.

I always felt that socially, New Zealand really valued the ‘man’s man’ or ‘tough bloke’ – a guy in stubbies, gumboots and a singlet, drinking beer on the porch and watching the All Blacks. It often weighed heavily on my mind that I wasn’t exactly fitting the mold, but these sorts of thoughts began to evaporate the more I became comfortable in my own skin.

In the dance world, the further along I made it, the more I was encouraged by teachers and friends to continue my endeavours, as male ballet dancers can be so hard to come by. I’m certain being a male ballet dancer offered me far more perks than it did drawbacks.” 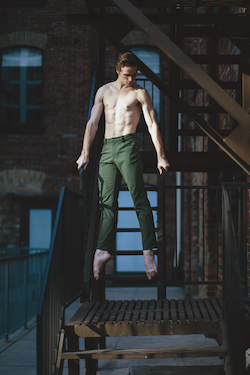 As a teen, you trained at the New Zealand School of Dance and San Francisco Ballet School’s Trainee Program. What did each school uniquely offer you?

“The New Zealand School of Dance really opened my eyes to the world of dance. Director Garry Trinder pushed for me to join the school and really made me seriously consider for the first time that I could make a career out of ballet. It was incredibly intense training, one of the strengths being the dual contemporary and ballet programs. In a world where ballet companies have repertoire that includes the epitome of classical ballet like Sleeping Beauty followed by something like Wayne McGregor’s Genus, which we performed recently here at The National Ballet of Canada, I find myself often drawing from techniques and teachings I learned from my contemporary classes at NZSD.

San Francisco Ballet School offered me a complete immersion in the world of ballet. We trained each day in the same building as the company, where we could pop upstairs to watch the company rehearse or attend any of their performances for free, and then at the end of the day I’d go home to a residence full of my peers and discuss what we’d seen. I always had fresh inspiration or motivation to keep pushing myself.”

You first professionally danced with Canada’s Royal Winnipeg Ballet and Béjart Ballet Lausanne. As an artist, what opportunities did these companies give you? What were some highlights at each?

“The Royal Winnipeg Ballet had just under 30 dancers when I joined in 2010, and I think this ended up being the biggest bonus for me. A corps de ballet member carries a huge workload in a smaller company and therefore garners a lot of opportunity to grab attention, which is exactly what I did quite early on. So right from the onset of my career, I was getting an enormous amount of stage time and experience. It didn’t really cross my mind at the time, but when I look back and realize that in my second year as a professional dancer I got to tackle the role of Albrecht in Sir Peter Wright’s Giselle, I can’t quite believe how lucky I was!

Béjart Ballet was a whole different world for me, but again I was blessed with being dealt a few lead roles during my time there and just tried to drink in all the information and experience I was getting. While Balanchine was revolutionizing ballet in America, Maurice Béjart was doing something similar in Brussels with his own distinct style before he moved the company to Lausanne. The highlight of my time in the company was performing on some of the world’s most renowned stages. We performed in Bolshoi Ballet’s theatre in Moscow and were part of the opening celebrations for the Mariinsky’s second theatre in St. Petersburg. We also performed in Paris, Tokyo and São Paulo, to name a few. This exposure to the world and the world’s stages was invaluable.” 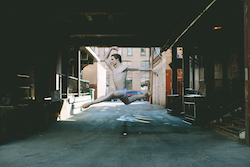 Harrison James of The National Ballet of Canada. Photo by Karolina Kuras.

In 2013, you joined The National Ballet of Canada as a member of the corps de ballet. What led you to the company?

“I came to The National Ballet of Canada for a multitude of reasons, one of which was a long distance relationship I was in at the time. Aside from that, the National Ballet drew me in for all the right reasons. Like any dancer, the repertoire is really important to me, and I was attracted to everything that company was performing. With classics like Romeo and Juliet, Giselle, Onegin and Manon, but then a great mix of innovative new work like Emergence by Crystal Pite and Chroma by Wayne McGregor. As a relatively large company with a huge audience in the city of Toronto, there are a lot of shows and some great tours. Pretty much everything I could ask for in a ballet company. Plus, I knew I liked Canadians!”

Only three years in and you were promoted to principal. With this change, have your responsibilities and freedoms in the company changed?

“I don’t feel like much has changed for me personally. The biggest freedom comes with being able to focus entirely on any of the roles I’m cast in without having my focus dragged in several different directions as I learn my other roles in the show, which is very nice. My approach hasn’t really changed at all, though.”

Currently, you and the entire National Ballet are in rehearsals for the Canadian premiere of John Neumeier’s A Streetcar Named Desire (running June 3-10, at the Four Seasons Centre for the Performing Arts in Toronto.) You are learning the role of Stanley. Can you tell us about the production and this character?

“A Streetcar Named Desire centers around the character, Blanche duBois. The ballet begins at the end of the story, with her locked in a room at an asylum, and then follows her as she relives her life. 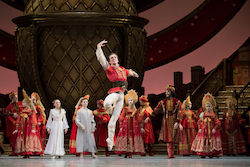 Harrison James with students from Canada’s National Ballet School in The Nutcracker. Photo by Karolina Kuras.

Stanley is the husband of her sister, Stella. Most people know Stanley from the movie as played by the heartthrob of his time, Marlon Brando. Stanley is all masculinity and power, and in the ballet this aspect of him is broken down to its simplest and most crude, often referencing this by beating his chest like a gorilla. He detests the way Blanche attempts to set up a facade around her life, and in the end this is potentially what tips her over the edge by shattering the world she’s created in her mind in a brutish and disgusting way.

I’ve never played a character like this before, and it’s really quite amazing how John Neumeier has managed to represent him in movement.”

In addition, you’re in rehearsals to make your debut as Benno in Swan Lake on June 15-25, also at the Four Seasons Centre. When approaching this role, as well as any others, what mental process do you go through to embody your character?

“I always reserve layering my character very much until I’ve learned the whole ballet and often wait until I’ve danced the whole thing in rehearsal. After that, it’s easier to step back in my mind and see where the character might build and give myself stories to give reason to their actions.

In most ballets, the choreography builds as the story does, so you don’t need much more than to draw from the steps, the storyline and the music. I never want to overthink a character, as I want to leave room to be spontaneous and reactionary on stage.”

All in all, what are some of your favorite characters that you’ve had the pleasure of performing across your career? Why? 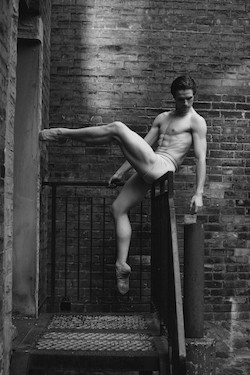 “My favorite characters are almost always the ones that speak to the fantasy of romance or heartache. I love playing Albrecht in Giselle because the story speaks to this purity of love in Giselle that doesn’t often exist in real life. Her love for him is so pure that even after he is the cause of her death, she loves him enough to save him from the same fate. Romeo is also another favorite of mine – you get to live the life of someone who dies for their love and then continue living after the curtain comes down.”

“My advice for boys is the same as it would be for anyone. I think dance should make you happy. If after all the pain and sacrifice you can’t find any happiness in what you’re doing, then there’s really no reason to continue. Dance is a very primal expression of joy. Ballet is an extension of that of course but it should always bring happiness.”

Looking to the horizon, what long-term goals do you have? Now that you’ve reached principal status, are you setting new aspirations?

“I’m not sure yet! I’ve only been a principal for one season, so I’m still just trying to get used to the idea of that being a fact in my life. The title still surprises me from time to time, and I don’t really think of myself that way. For me, the main focus is dancing as much as possible in the short amount of time we dancers have before it’s time to move on.”

To follow Harrison James at The National Ballet of Canada, stay tuned in to the company’s various engagements at national.ballet.ca.