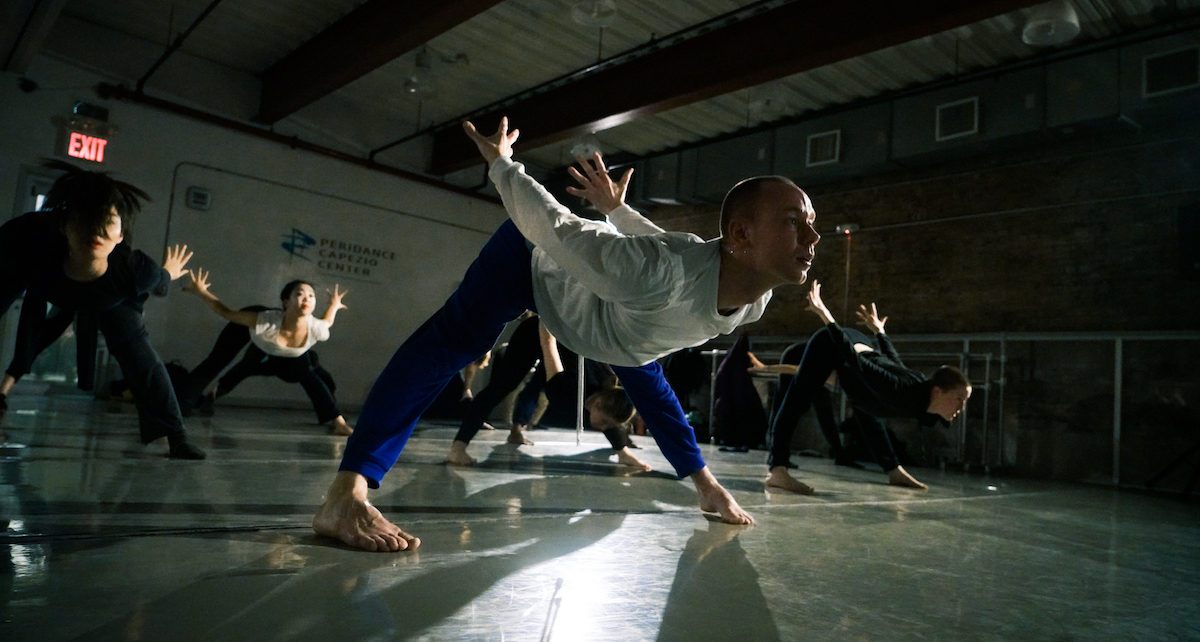 For many dancers, the stage, the performance space, is their home. But for Jon Ole Olstad, the studio is where he thrives. It’s his sacred place of growth, celebration, no judgment, of being in the moment. It’s no wonder, then, that although Olstad has had a rich performance resume – including dancing with Nederlands Dans Theater (NDT) – he is now making his footprint in the dance world as a teacher, leader and mentor.

But, like many things in Olstad’s life, it seems as if that was always the plan. Today, Olstad is on faculty at Peridance Capezio Center and Steps on Broadway; is an intensive faculty member at Quest Intensive, VIEW Dance Challenge and Joffrey Ballet School Summer Intensive; guest teaches at Movement Lifestyle and the EDGE Performing Arts Center; and has done masterclasses at Juilliard, NYU Tisch School of the Arts, Marymount Manhattan College and the Alonzo King LINES Ballet Program. 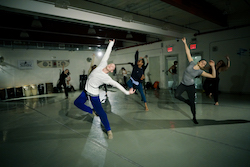 Through his contemporary classes, Olstad says he hopes to give students a full-on “magical”, challenging experience, even a memory of a lifetime, and wants dancers to leave feeling their $20 was well spent.

He doesn’t just “give” class or a weekly combo. He usually starts the session by gathering everyone together, playing some music to set the mood, saying “hi” and maybe cracking some jokes, and giving a simple but physical warm-up that’s inspired by his jazz and contemporary jazz education and also yoga and Gyrokinesis. And Olstad’s choreographic phrases are musical, dynamic, surprising and expressive, ranging from grounded, flowy floorwork to more isolated movement. In this way, he keeps his students alert and teaches them to never play it safe, while still encouraging them to be themselves, free from negative thoughts.

And testimonials of his students – many professional dancers – attest to his efforts.

Po-Lin Tung of Wayne McGregor | Random Dance says that Olstad’s class “became a place for therapy and self-realization”. Sarah Parker, most recently from Fiddler on the Roof on Broadway, describes his class as “one of support, encouragement, good music and love”. And Ballet Hispánico’s Chris Bloom says, “It is refreshing when an artist can come into a room with a group of highly advanced dancers and still find ways to help them develop and improve, teasing out new ideas and refining already polished skills.”

Becoming a dancer, and now a teacher, was never a “plan B” for Olstad. In fact, his whole illustrious career has been one so fully intent on “plan A” that it seems he never visualized another way.

Olstad was born in Otta, a small town in Norway with around 6,000 inhabitants, a place where he says “everyone knows everyone’s business”. It was a safe place, where most teenagers participated in soccer, skiing and other sports, but there wasn’t much dance.

When he was 15, Olstad performed in a community production of Footloose, song and dance and all. With no dance training, he became completely transfixed by the art. Wanting more, Olstad was encouraged to audition for Stange Secondary School, a performing arts high school nearly three hours away. It was at that audition, at 16, that he took his first ballet and jazz class, and although he didn’t know the difference between first position and a “chasé step jeté”, clearly his immense passion for being in the studio scored him his acceptance. 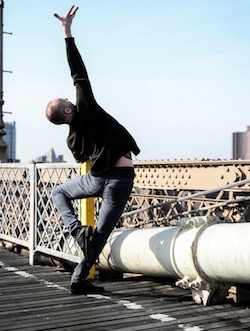 It became three years of learning dance and growing up. “The teachers told me that from that very first audition class, they saw a spark, and even if I couldn’t pick up one step, I worked harder than anyone else and had more passion than they had ever seen,” Olstad recalls.

He says dancing made him feel something that nothing else did, that he couldn’t function without it. “It’s my home, it’s my biggest love, it’s my most vulnerable place of passion, it’s my therapist, it’s my place of creativity, growth and development,” he shares.

But even with loads of passion, Olstad was still cut from auditions straight after class and spent hundreds of dollars to travel for auditions he didn’t get. And yet, it was never an option to give up.

And then Olstad got his first job – touring project Kamuyot, a collaboration between the Swedish Riksteatern and Batsheva Ensemble. Later, in 2012, he was hired by NDT, where he worked with choreographers Paul Lightfoot and Sol León, Hofesh Shechter, Jiří Kylián and Crystal Pite. And in 2015, he was offered a position with Esklan Art’s Factory, based out of Rome, Italy.

You’d think Olstad would be thrilled, living his dream. But he recalls the “insane nerves” he felt the first time he performed with NDT, which eventually grew into enormous stage fright. And then there was the time at NDT, in Pite’s ballets Parade and Frontier, that Olstad was paired with a fellow dancer with whom he didn’t get along and who even cursed at him on stage.

“He had laughed at me in rehearsal, slammed doors in my face and just acted so rude and shameful that I lost all self-confidence,” Olstad remembers. “I started questioning why dancers acted the way they did, why people couldn’t smile to each other and why people seemed to be more focused on success, walking over people to get their way. I started to really miss having passionate, celebratory fun with my dancing.”

Of course, Olstad tried to focus on the more positive, genuine artistry he was also surrounded by at NDT – dancers who, he says, always gave their full heart. “Sitting in the wings, I often studied dancers like Luisa Maria Arias and Parvaneh Scharafali,” he says. “I was always so touched by their artistry and that it was truly always about expressing and not impressing.”

And, at NDT, Olstad says he learned and experienced authentic, “good choreography style” and how to take risks as a dancer. “I witnessed what ways of working are beneficial to be efficient and what makes that magic happen on stage,” he adds.

Still, he says, “I was performing at Sydney Opera House with NDT1 and had great success on paper. Did I have success in my heart and in my true passion? No, I didn’t. I was unhappy, and I wasn’t at home.”

And maybe this brought him back to what initially got Olstad hooked on dance during his high school days – the self-exploration, research and joy that came with working in the studio. Olstad had first started teaching in 2010, after his Kamuyot project and during a hiatus in performance jobs. His first contemporary class was at hip hop studio The Vibe in Oslo. He says he enjoyed the time he spent preparing his class – building a warm-up, finding music, choreographing combinations and pulling from his knowledge and experience.

“I remember saying in college that if I could be paid to dance in the studio, I would rather do that than perform on stage,” Olstad shares. “I feel, at times, so judged when performing, but in the studio that’s my home and that’s my sacred space of celebrating my dance and art. When starting to teach, I felt that no one could judge me, and if they did I didn’t care. You could like my class and come back, and if you didn’t like it, then don’t come back. The studio is my home, and it’s where I have had the best moments of my dancing. It’s the place where I don’t judge myself or think of anything else than the present moment. It’s indescribable.”

His teaching continued to grow, and he found immense joy in mentoring others and providing a place where dancers could investigate their art, take risks and be true to themselves. And it was through teaching that dance became non-judgmental and fun again for Olstad. He says he’s inspired by the style and atmosphere of teachers and choreographers like Siv Gaustad, Alex Magno, Robert Hewitt, Zvi Gotheiner, Terri Best, Caroline Skjoershammer and Jermaine Spivey. 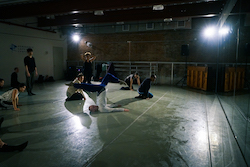 Today, although he still enjoys performing, Olstad is home, in the studio, in his class, his own space he shares with artists who want to grow and push themselves past their comfort zone. “I want my students to dig deep,” he says. “I want them challenged, and I want them to trust the knowledge they have and trust that inside their hard work, they are enough.”

His teachings go far beyond movement; he also aims to fill the room with a generosity of spirit, instilling in others what took him long to discover on his own. He encourages his students to use resources like the Internet to stay current on dance happenings and to get inspired, to find a choreographer and company with whom they’re truly happy and not just to have a job, to focus on the journey rather than results, to be true to themselves instead of feeling the need to please or fit into a mold, and to not be taken advantage of as a dancer.

“A job and a contract don’t make you any more of a dancer than if you don’t have one,” he says. “Why dance things you don’t believe, that make you unhappy, just to put bread on the table. I have a friend who says she’s much happier making coffee at a café and spending money on classes and workshops she believes in than wasting her time with work she doesn’t believe in. She finds her own truth within herself and her own vulnerability gets to grow because of her journey and not someone else’s vision.”

Olstad adds, “Dance for me needs to be profound, and it needs to be filled with celebration and vulnerability. I dance every day. I dance every day teaching; I dance every day when listening to music. I will forever be a dancer at heart, and I wish other dancers could realize that it’s not about what other people think of your dancing or if you have a job that determines if you’re a dancer. Your passion and love for it should be the only validation. You are your own dance.”