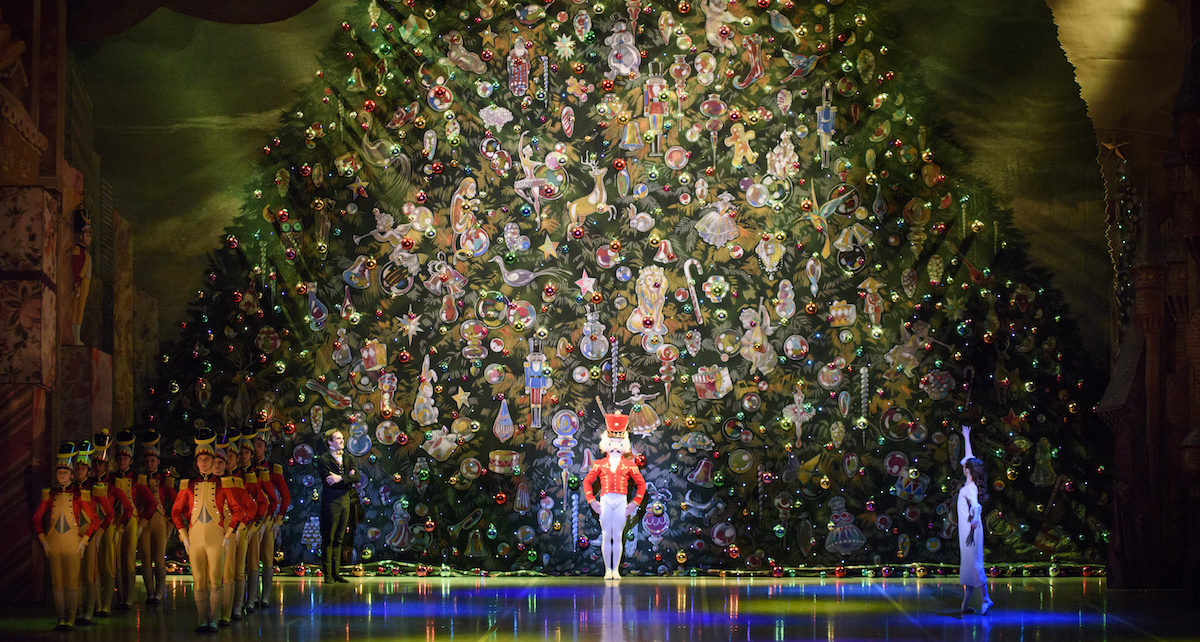 Have you ever considered attending a certain dance performance, but then thought “Meh, I’ve seen it before…”? There’s so much exciting dance out there nowadays, it can feel a little silly to opt for shows you’ve already experienced, perhaps at the cost of missing out on something you haven’t. True, The Nutcracker is a treasured holiday tradition that some viewers will see year after year, no matter what. Other viewers, however, need the lure of something innovative and creative to keep coming back every holiday season. Shaking things up a bit, while staying rooted in the show’s revered tradition, also helps keep it current and relevant in a constantly shifting, unpredictable world. Boston Ballet’s Mikko Nissinen’s The Nutcracker did just that.

The Prologue established a simple, traditional and classy feel. This demonstrated a shift from the style of prior years, which was more ostentatious in style. There was a slow build to the action of the Party Scene. The pantomine was animated enough to be clear but stopped short of hammy. It contributed to a scene naturalistic enough to feel like a party with dancing, rather than a dance depiction of a party. A good amount of pedestrian movement enhanced this feeling. There was, however, enough technical movement to keep the stage teeming with moving energy.

Smart staging made relatively simple choreography stand as beautiful imagery. In one partnering movement, for instance, the wives (mothers of the attending children) turned in arabesque while partnered by the husbands (fathers of those children). The wives’ long skirts made beautifully flowing triangles as they turned in spot-on unison. The moment of Fritz breaking Clara’s new Nutcracker was another intriguing and intelligent choice; Clara’s friends (girls) lined up behind her while Fritz’s friends (boys) lined up behind him, creating a tug-of-war. This seemed psychologically and socially accurate, as young boys and girls sometimes join in defense of friends of their own sex against those of the other.

The Snow Queen (Seo Hye Han) and King (Paul Craig) graced the stage with a beautiful pas de deux, in honor of Clara helping defeat the Mice and Mouse King. They ate up the stage with expansive staging and lines brimming over with infectious energy. The Snowflakes achieved impressive unison in their fast, difficult variation. Clara (Delia Wada Gill) and The Nutcracker Prince (Patrick Yocum) flew off on a cloud to end the act and descended at the start of the second, which was an interesting movement into the Land of The Sweets. The Sugar Plum Fairy (Misa Kuranga) welcomed them there. She danced with captivating épaulement and extension beautifully sustained through breath. 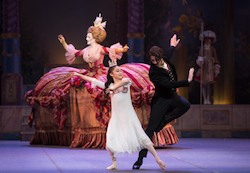 Progressing into the country-specific variations, the Arabian dancers offered a slow build to wow-worthy movement. As is typical for this variation, the ballerina (Lia Cirio) offered seemingly inhuman extension. The choreography was innovative and fresh, however, with lifts such as Cirio upside down in a split and her holding her leg à la seconde as her partner (Lasha Khozashvili) held her horizontally. Lighting Designer Mikku Kuntu enhanced the precise, spellbinding dancing of the Chinese variation (from dancers Ji Young Chae and Irlan Silva) with multi-colored bulbs on each side of the stage. It wasn’t unrefined flash but instead mindful and masterful building of a bright color palette.

French Pastorale took the stage with one ballerino (Florimand Lorieux) and two ballerinas (Diana Albrecht, Maria Alvarez). Staging and choreography utilized this odd number in compelling ways, such as a pas de deux upstage right and a soloist downstage left. Their grace and comportment felt authentically French. Clara joined in the Polichinelles variation, an engaging choice that added continuity and cohesiveness to the storyline. The Waltz of the Flowers did not offer the precision and perfect unison of the Snowflakes. The variation was still spellbinding, however, and intelligently staged.

For instance, formations of flowers on either side of the stage grew wider and narrower as dancers moved inward and outward, with the two Lead Flowers and Dew Drop (Lauren Herfindahl, Addie Tapp, and Ashley Ellis, respectively) perhaps representing the flower’s middle parts. This choice compellingly re-created opening and closing flowers, the central parts of the flower remaining unchanged. Closing out the main dancing, The Nutcracker Prince and Sugar Plum Fairy graced the stage with understated technical mastery; strength and ease co-existed in a hypnotizingly magical way. 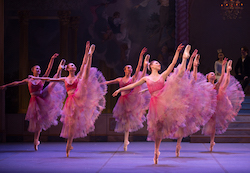 So many astoundingly accomplished dancers have danced these roles before. But to fill houses year after year, as is the case with The Nutcracker overall, they have to make it their own. And that they did. Thus lives a beautiful balance between the old and new. In an age of tension between the forces of tradition and innovation, of plurality versus uniformity, such a balance is refreshing and comforting. And the amazed pleasure of watching classical ballet’s physical feats is icing on the holiday cake that is The Nutcracker. Boston Ballet’s interpretation served up all of that for us to enjoy.