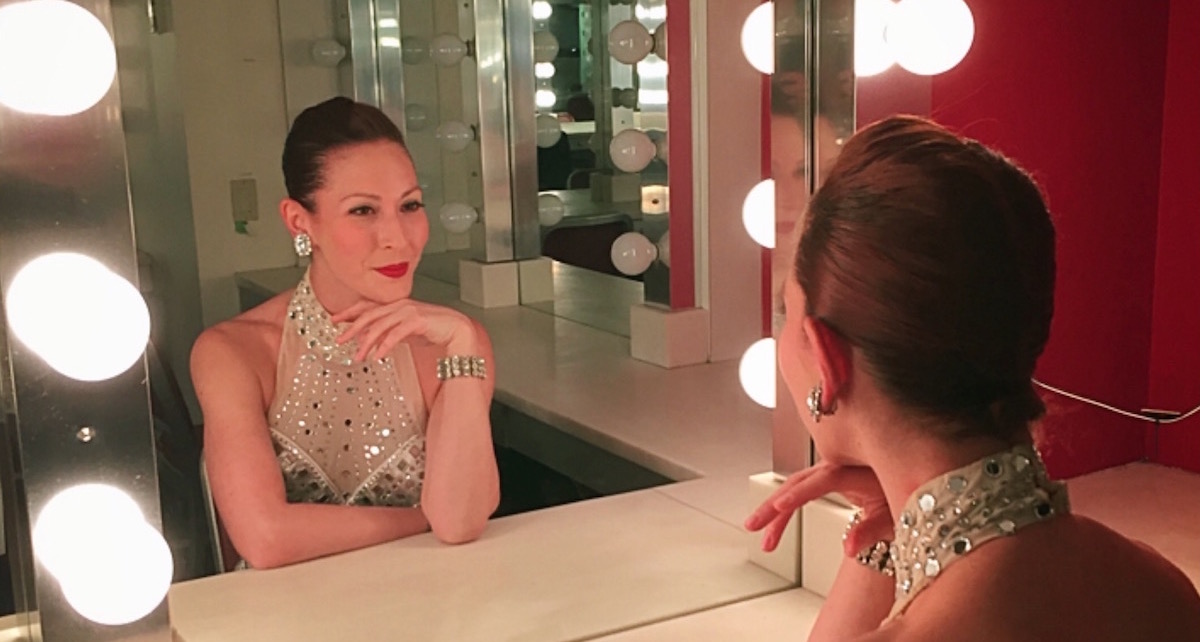 “There seems to be a trend in my life,” she says. “Luck.” Alyssa Epstein seems like one of the luckiest girls in the world. But the truth is, she has defied two of the most incredible odds: the odds of becoming a Radio City Rockette based on the number of women who audition (less than one percent), and the odds of someone developing breast cancer between the ages of 30 and 40 (also less than one percent). Now cancer-free, Epstein is dancing her 11th season as a Rockette in the Christmas Spectacular. 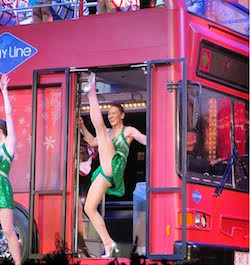 The “luck” that she talks about is only part of her achievement — a small part of it. Behind the glitz and glamour of the Radio City Rockettes are three qualities: impeccable training, radiant talent and surefire tenacity. Epstein has all three. A million girls would kill to dance on Radio City’s Great Stage, and Epstein has graced the line of 36 Rockettes for over a decade. If you’ve seen the legendary Christmas Spectacular, you know that the Rockettes are athletes. They perform 300 kicks per show, up to four shows a day during the holiday season. For Epstein, that’s been over 300,000 eye-high jump kicks — not including rehearsals.

Epstein grew up dancing at the Doreen Kerner Dance Studio in her hometown of Livingston, New Jersey, and her grandmother first took her to see the Christmas Spectacular when she was just eight years old. “The Christmas Spectacular became a tradition for us,” she remembers. “I knew from that young age that I wanted to be on that stage one day!”

Epstein continued her dance training at the New Jersey School of Ballet and moved to New York City after graduating from the University of Illinois.

Although now a long-time veteran, Epstein’s road to Radio City was not easy. “I was cut right away at my first audition,” she admits. “But instead of getting disheartened, I became determined. I auditioned for the Rockettes four times before actually booking it.”

This is not uncommon, for the audition for the Radio City Rockettes is infamous. The try-outs take place in late April at the Music Hall on 50th Street and 6th Avenue. Girls who meet the mandatory height requirement (5’6” to 5’10½”) arrive early in the morning and snake a line around the entire city block to wait their turn. The first cut consists of just six eye-high jump kicks and a double pirouette. Seventy percent of the girls are cut after this first round. The choreographer goes on to teach a fast-paced jazz routine, followed by a rhythm tap combination.

The Rockettes are the world’s greatest precision dancers. Everything has to be in unison. “Our director will choreograph everything from the angle of our cheekbone to the placement of our finger tips,” says Epstein. To shine at the audition, you have to perform the choreography exactly as demonstrated.

Less than 50 girls are invited back for the second day of auditions, where the routines become more intricate and are taught at a quicker pace. After that, it’s the dreaded waiting game. But three months after her fourth audition, Epstein got the call — she would be a Radio City Rockette.

Now in her 11th season, Epstein knows the ropes in “Rocketteland”, but that doesn’t necessarily make it any easier. “The rehearsal process is brutal,” she explains. There’s a lot of work that goes into making the magic that appears on the Great Stage every Christmas season. For starters, the Rockettes line up with the tallest dancers in the center and taper out toward the “less tall” dancers. This formation, along with the trick of kicking to one’s own eye-level, creates the illusion that all the Rockettes are the same height.

“We stage numbers slowly and meticulously, making sure every head, arm and leg are in line with the next girl,” Epstein shares. “We can spend hours on just a few counts of eight. We keep our lines straight with a detailed grid system on the stage. Every move has both a number and a depth.”

The choreography is so much more than individual steps because the dancers have to work together almost like a machine. The precision and magic won’t happen unless everything is perfect.

Despite all of the blood, sweat and tears, Epstein is proud to be a Rockette. “I love that I am part of a legacy,” she says. “It is truly special to be part of something that has been in existence for more than 90 years!” 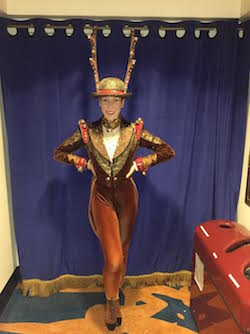 There is joy, honor and a sense of camaraderie that come from being a part of the long and exciting history of the Rockettes. Choreographer Russell Markert founded the line of legendary precision dancers back in 1925 as the “Missouri Rockets” of St. Louis. Markert had been inspired by Ziegfeld’s Tiller Girls and thought, “If I ever got a chance to get a group of American girls who would be taller and have longer legs and could do really complicated tap routines and eye-high kicks… they’d knock your socks off!”

Markert’s vision knocked the very socks off the wealthy Samuel Roxy Rothafel (of The Roxy Theatre), who transferred the girls to New York and renamed them the “Roxyettes”. It wasn’t until Rothafel opened the Radio City Music Hall in 1932 that the dancers finally became “The Rockettes”. The tradition of the Christmas Spectacular began that same year, in 1932. Two pieces of choreography have remained in the show to this day, over 80 years later: “The Parade of the Wooden Soldiers”, in which the Rockettes perform kaleidoscopic formations with military precision; and “The Living Nativity”, featuring breathtaking costumes and live animals such as sheep, donkeys and camels. Other costumes, songs and choreography have evolved over the years, but the spirit and sparkle of the Rockettes has not only endured, it has grown.

Last winter, Epstein was one of just 40 women to be cast in the Rockettes’ all new summer show, The New York Spectacular. But after a routine visit with her gynecologist, her life took an unexpected turn. Noticing a small lump in Epstein’s breast, her doctor encouraged her to get a baseline mammography, even though Epstein was only 34 years old, six years younger than the youngest recommended age. (“Women 40-45 have the choice to get a mammogram. Women 45-55 should get one every year. Women 55 and older can switch to every two years,” according to American Cancer Society Guidelines for the Early Detection of Cancer.) Epstein had experienced benign cysts throughout her adulthood, so she didn’t feel concerned about this premature procedure. But a few weeks later, she returned to her New York City apartment to find her parents at her front door with the news: breast cancer.

Epstein’s official diagnosis was ductal carcinoma in situ (DCIS), a noninvasive form of cancer that, if left undiagnosed and untreated, would become invasive. In her 10 years and over 1,000 performances as a Rockette, Epstein had only missed one day — two shows — and that’s it. But things had changed. She turned down the contract for The New York Spectacular and took up a very different schedule — doctors’ appointments in place of rehearsals, surgeries instead of shows, and also a new hobby: blogging.

As an avid writer, blogging became Epstein’s personal way to cope with her diagnosis. “Whatever thoughts, feelings, emotions or stories came to mind, I would write them down,” she recalls. The tough decision was whether or not to share her story with the world. “The Today show’s Hoda Kotb, a fellow breast cancer survivor, once said, ‘Don’t hog your journey…it’s not just for you.’ And I tell myself that daily.”

Epstein made her first blog entry, “A word about cancer”, public on April 15, 2016. As of late November, she had published four extended blog entries chronicling that fateful doctor’s appointment, receiving her diagnosis, undergoing a double mastectomy, returning to Radio City and processing her emotions all along the way. Her blog has gotten over 15,000 hits.

But while writing was Epstein’s crutch, dance was truly her healer — physically, mentally and spiritually. The goal of returning to her second home, Radio City, served as the light at the end of the tunnel. Just eight weeks after her first surgery, Epstein returned to Radio City to teach for the Rockette Summer Intensive.

“Standing in front of my students gave me life again,” she remembers. “Everything had new meaning. My teaching had a purpose, and my students responded to me in a way in which I had never experienced.”

After undergoing a double mastectomy in April, Epstein was officially cancer-free. And when Rockette rehearsals began in early October, she rejoined the line of ladies for her 11th season. “I can honestly say without the support of my Rockette sisters and Radio City family, I would not have been able to make it though this year,” she confesses. “I know that I can always count on my Rockette sisters to hold me up.” 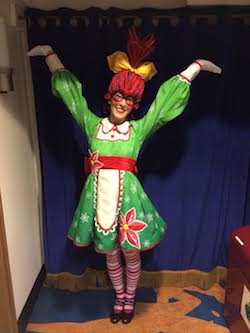 November 15 — exactly seven months after Epstein made her blog live — was opening night of the 2016 Christmas Spectacular starring the Rockettes. Ironically, Epstein’s cast (the Christmas Spectacular has full casts of the Christmas Spectacular) had never been the one to perform on opening night…until this year. The evening began with a special solo performance by Stephanie Consiglio, a young dancer and cancer survivor who is part of the Garden of Dreams Foundation, Madison Square Garden’s not-for-profit organization that strives to positively impact the lives of children facing adversity. Consiglio and Epstein had connected through social media and finally got the chance to meet just before they took the stage.

“She wants to be a Rockette more than anything,” says Epstein. “I only hope that I can inspire her to follow her dream. She most definitely inspires me to be the best dancer I can possibly be.”

Opening night marked the official start of the season. For Epstein, that means performing in over 100 shows, at the Macy’s Thanksgiving Day Parade, and on numerous TV shows and press events.

Additionally, Epstein has become an advocate for Dancers Against Cancer, a charity to provide financial support to teachers, dancers and families impacted by cancer. “The costs associated with cancer treatment are astronomical,” she reveals. “It broke my heart to think that young dancers might not be able to return to dancing due to financial burdens placed on their families.” To date, Epstein has helped to raise nearly $15,000 for Dancers Against Cancer. The organization is halfway to its goal of raising one million dollars.

“I have been really lucky,” says Epstein. “If there is one thing I have learned from the past year, it is that tomorrow is not guaranteed. If you have a dream or a goal, do not put it off. Go after it today. I hope I can inspire young dancers that anything is possible and achievable with hard work and dedication.” And maybe a little bit of luck.

To keep up with Alyssa’s blog, visit www.alyssaepstein.com.

To donate to Dancers Against Cancer, visit www.imadanceragainstcancer.org.

For tickets and information about the Radio City Rockettes, visit www.rockettes.com.