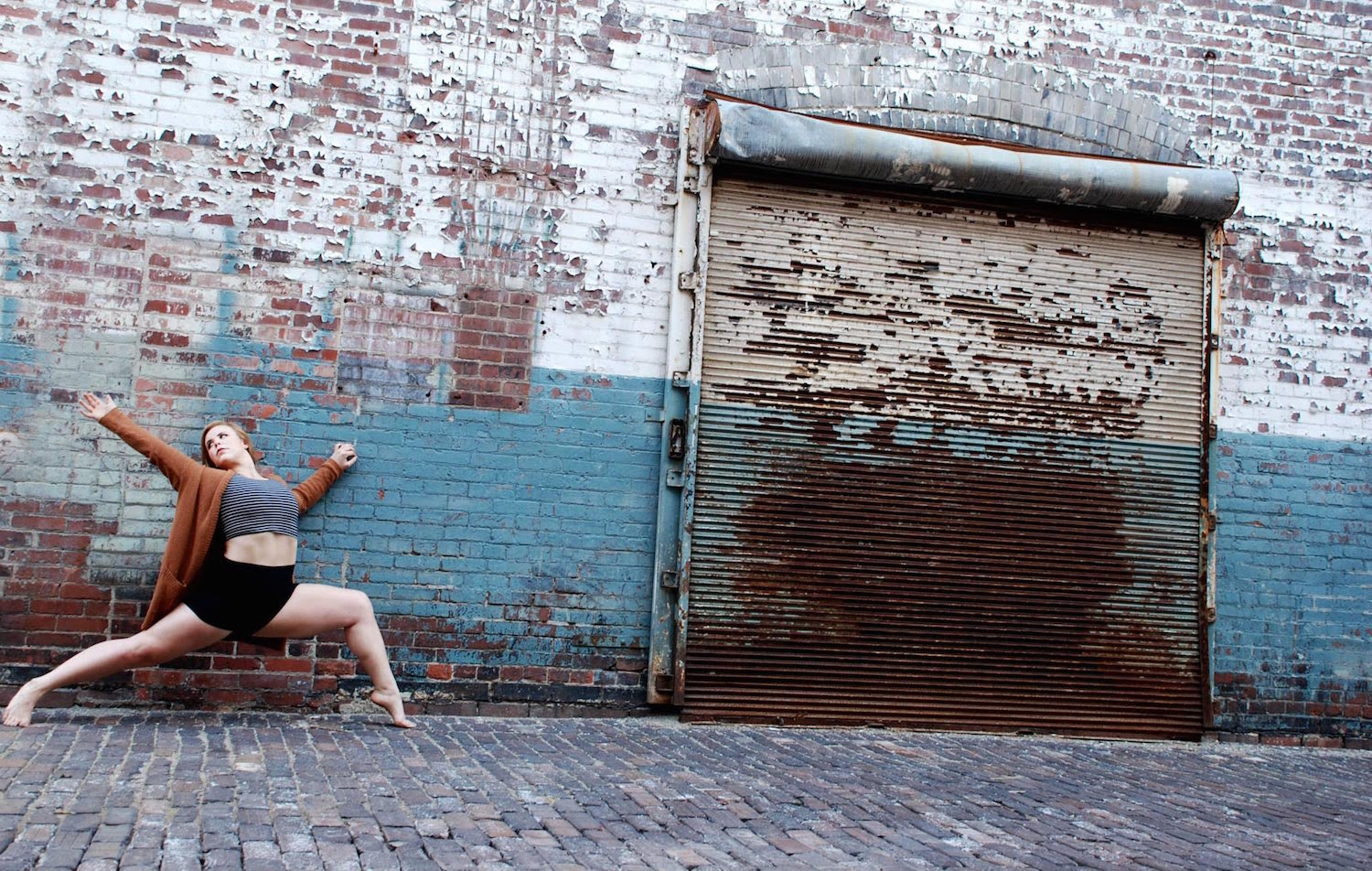 Cailin Manning, a dancer who hails from Franklin, Tennessee, was named the winner for BellaMoxi Dance Convention’s Emerging Artists Choreographic Festival in Chicago this year. Her award-winning routine, From Four to Two, was the product of her Ohio State University senior graduation project. To get to know Manning a little more, check out her interview with Dance Informa. 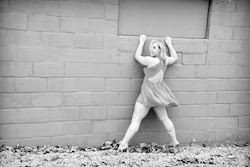 When did you start dancing? What inspired you?

“I began dancing when I was three at a local studio near the preschool I attended, so it’s been a lifelong endeavor. At that age, I can’t truly claim I was ‘inspired’ to start dancing, but what kept me engaged in the art form was the fact that it gave me a purpose and that I was completely passionate about that purpose. Dance was always this rigorous training that took up 20-plus hours of my time every week, yet the dedication was something that I loved about it. You couldn’t give that much time toward something if you weren’t passionate about it.”

In what styles did you train?

“I grew up training classically in ballet, tap, jazz, hip hop and lyrical/contemporary. After high school, I attended Ohio State University, where I focused mostly on contemporary/post-modern dance styles but never lost touch with the training I have had since I was three. I’ve been trained in Cunningham, Limón and Horton techniques, yet I have also been exposed to house technique, Shen Wei-inspired technique and Gaga.”

When did you start choreographing?

“The first piece I choreographed was a contemporary solo on myself sophomore year of high school. After that, I fell in love and continued to choreograph my own solos, solos for other dancers and a few small group pieces. Thus far, my choreography has consisted of tap, hip hop and contemporary. Yet contemporary has definitely been my focus point.” 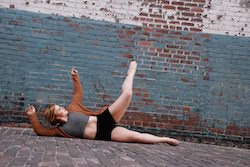 Who have you worked with in your career thus far?

“I have had the privilege of working with Travis Cooper, Stacie Flood-Popp, Abby Zbikowski, Ann Sofie Clemmenson, Bebe Miller and many other inspiring teachers and choreographers. I greatly look up to Travis Cooper, Joshua Manculich and Ann Sofie Clemmenson because I have been able to work with them hands on projects, and I greatly respect them as not only choreographers but also teachers, which I feel are two very separate jobs. I am constantly inspired by them in how they coach me as both a dancer and a person.”

What are your dance goals?

“Since recently graduating college, I have been in a whirlwind of emotions about my career as a dancer/performer. But to quote one of my professors, Dave Covey, ‘Don’t think of yourselves as just dancers. Think of yourselves as working artists.’ I have truly come to take this to heart. After dealing with knee injuries and doubt in my abilities to ever perform professionally, I found a love for all different facets of dance: choreography, dance film, sound design and directing. I’ve come to realize that dance can be such an interdisciplinary art form and that I love being hands-on in all aspects of creating a work.

I love being in a ‘creative director’ role. I think it might be the power-hunger in myself but also the perfectionist who wants to see an idea all the way through from the bottom-up. Eventually, this is the role I would like to have. Until that day comes, I want to keep creating, whether that is strictly choreography or with dance film or what have you, and I would like to see how the choreographic mind can influence other creative roles. Dancers have a unique somatic knowledge and are constantly working with the moving body in space, and I think that this way of thinking could benefit other areas than just dance.” 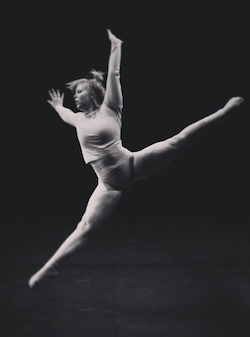 How did it feel recently being named the 2016 BellaMoxi Emerging Artist Choreographic Festival Winner for Chicago?

“Validated. As artists, we shouldn’t rely on the critiques of other people to make us feel like what we are doing is ‘right’ or ‘wrong’, but as humans there are times when validation of the work you are doing is needed in order to push you forward. Growing up in the competition circuit, the competitive side of me still lingers. There were definitely a few other pieces that I knew would appeal to those more inclined to classic technique or the more commercial entertainment, but I think what they appreciated about my piece was my willingness to be different and take choreographic risks. I like to create pieces that are aesthetically pleasing but in a non-traditional way, and being recognized for working in this way just makes me want to keep creating.”

When did you start working on the routine you presented at BellaMoxi, From Four to Two?

“From Four to Two was actually my senior project in graduating from Ohio State, and it was a choreographic process based off of anthropological (the study of human physical evolution) research, so it was a much different process than what I was used to.

We began rehearsals in August, but the anthropological research was a culmination of classes I’d taken over the previous two years and the research conducted during the year inside and outside the studio. Since my project was looking at our innate movement sensibilities as humans, I wanted dancers who had natural movement tendencies (whether those were similar to mine or all their own), would be easily coachable in movement that would be hard to verbalize, and would be good collaborators in generating movement. My dancers are different in their own ways; I picked them because I could see something of myself in them, whether it was that they were very grounded in their movement, they were very connected to their spine, or had a good connection to their breath, but they each brought their own personal attributes to the movement, which is something I wanted to include alongside the learned movement. 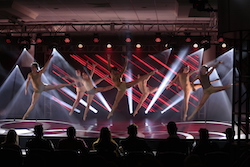 Dancers performing Manning’s ‘From Four to Two’ at BellaMoxi in Chicago. Photo courtesy of BellaMoxi.

Rehearsals were definitely a learning process. Like I said, this was a much different choreographic process than anything I’ve usually done. My go-to choreographic method is simply using music to create movement, using the melodic structure and tone of the music to create a visual piece. This process consisted of researching the human body’s physical changes over time and how that changed the way we move, as well as connecting to our primitive animal ancestors and finding the connection toward movement impetus. I know it all sounds very heady, and it is. The hardest part was finding how to influence my choreography with this information.

Rehearsals at first were very collaborative. I used a lot of task-solving improvisational methods to start generating movement ideas and get my dancers internally feeling and questioning their ‘instinctual impetus to move’. It was hard because I was not just a choreographer, but also a teacher and a coach, but it was also exciting because I was creating in a way that I never had before. That excitement and pride in what I was doing and making is what keeps me loving choreography.”

Looking to the future, how does this recognition with BellaMoxi push you to keep producing work?

“Just knowing that people appreciate what I’m making keeps me excited about making work. The feedback wasn’t all good and there were definitely things they didn’t like so much about the piece, but perfection is overrated. As someone who chased perfection for too long, I am more proud of the fact that I created an imperfect piece in which they still saw promise. Like I said, validation isn’t necessary but it definitely gives you an edge as an artist, especially if that validation is coming from people in the dance community who have more experience and can help you promote yourself. Fame isn’t what I am chasing, but the input of people more famous than myself gives me an idea of my place in the dance community.” 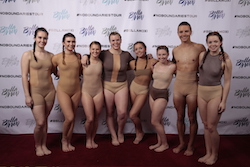 Manning’s dancers who performed her ‘From Four to Two’ at BellaMoxi in Chicago. Photo courtesy of BellaMoxi.

“Moving forward, I will be presenting a piece with The RAW Artist Collective in Nashville in summer 2016 and hopefully creating another dance film in the near future and submitting it to a few film festivals across the U.S. I plan to stay in Nashville for a year now that graduation is over and try to work with my connections there with choreography, performance and film.”