In the music video “Black and White Pages”, dancer Chris Bloom launches into dusty cobblestones, dances atop a stack of rebar, rolls along train tracks and moves swiftly through a forest floor, rebounding off tree trunks. It’s an impressive video, not just in its choreography but also in its direction, cinematography, scenery and intent. 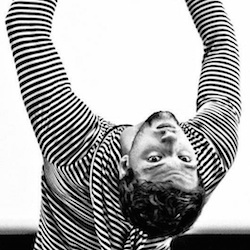 It’s an artistic video that tells the story of childhood and about returning to the place where you grew up, only to be greeted by various memories along the way. And, even more meaningful, the video was in fact a family collaboration. The song, “Black and White Pages”, was written and performed by brother-sister duo Micah and Merryn Mason; their brother, Patrick Mason, directed the video; another brother, Christopher Mason, was a production assistant; and Bloom, the video’s dancer and a member of Ballet Hispanico, is a long-time friend of the Mason family. During the filming process, Bloom would also prove to be the video’s choreographer and co-director.

Inspired by the song’s “brilliant lyrics and wonderful melody” for the video, Patrick Mason says both he and Bloom come from big, close-knit families. The video, shot in Shenandoah Valley in Virginia, portrays a feeling of nostalgia and reconnection with childhood that seems to be heartfelt for all involved.

“In the video, the character travels to and re-explores places where he built childhood memories, and, in the process, he uncovers poignant memories,” Bloom explains. “Micah was inspired to write the song when he traveled back to the town where he spent his early childhood. We tried to speak to the sense of longing for good times past that I think many people experience. For me at least, happy memories are often tinged with sadness because once they are over, they are gone forever.”

“Black and White Pages” was filmed over the span of about 26 hours in just two days, with a series of very long takes, which allows the viewer to see more of Bloom’s dance sequences.

“This is the first time I have shot dance, aside from a short clip I did with a friend,” shares Mason, who has directed a number of award-winning music videos and commercials. “The clip actually set the style for how I would shoot the dance later on, using unbroken shots and immersive photography. I love using long takes to really bring the audience in.”

During pre-filming discussions, Bloom planned the type of movement and gestures that would best communicate the story of the video. Then, on filming days, once he and Mason arrived at each location and scoped out the environmental challenges and opportunities, Bloom choreographed the scenes.

“It was important that the environment should be a part of the concept and the movement,” Bloom says. “Once I choreographed the scene, Patrick would figure out how he wanted to shoot it. Patrick wanted the camera work to be intimate with the dancer, so that required him to move around a lot, and we would essentially dance a duet together.

“Within the choreography,” Bloom continues, “I tried to avoid falling into the usual traps of being showy and holding coolness as the most important factor. Also, because dance is of the body, and since dancers have beautiful physiques, sexiness often becomes a value in dance work. We wanted to talk about childhood, so I tried to imbue the dancing with some quality that was reminiscent of how a rambunctious young boy might move. It needed to be a bit rough around the edges for that to work. It also needed that blasting energy that young boys have, that sense of freedom.”

Bloom also explains that each environmental setting – the stack of rebar, the forest, the train tracks – presented different limitations on the type of movement that he could achieve. He recalls the filming in the house, for example, to be a particular challenge.

“Patrick had a very complicated path to run in order to get the shot he wanted,” Bloom recalls. “He had to navigate through several doorways without looking where he was going because he was filming. The hardest part was he had to run up a set of stairs while turning to keep me in the shot. He accomplished that through talent and sweat.” 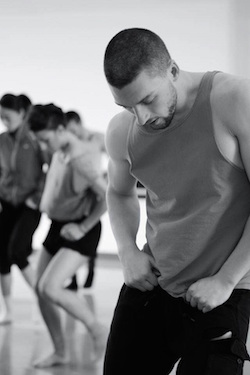 These long shots of choreography in each scene required many, many different takes to get each just right. Mason estimates doing a minimum of 20 takes for each scene, and 40 takes for the shot in the house alone. And Bloom adds that it was often not until the 28th or 29th take when they accomplished the shot they were after.

Even though “Black and White Pages” is very dance-centered, both Bloom and Mason believe the video can be enjoyed by all types of viewers.

“This is a video meant for everyone,” Mason adds. “I think we all look back at the places we grew up. I hope viewers will feel swept away and entranced by it, like they are dancing with Chris.”

For Bloom, “Black and White Pages” was his first time working on a dance video, choreographing for film, co-directing and creating on location. He calls the experience “incredibly rewarding” and hopes another project will bring him and Mason back together.

“Patrick and I both have a strong artistic vision and exacting standards,” Bloom says. “Artistic endeavors have their own personalities, so for each project different people are required to fit the needs of the work.”

To see the work of Bloom and Mason, view “Black and White Pages” below, or click here.