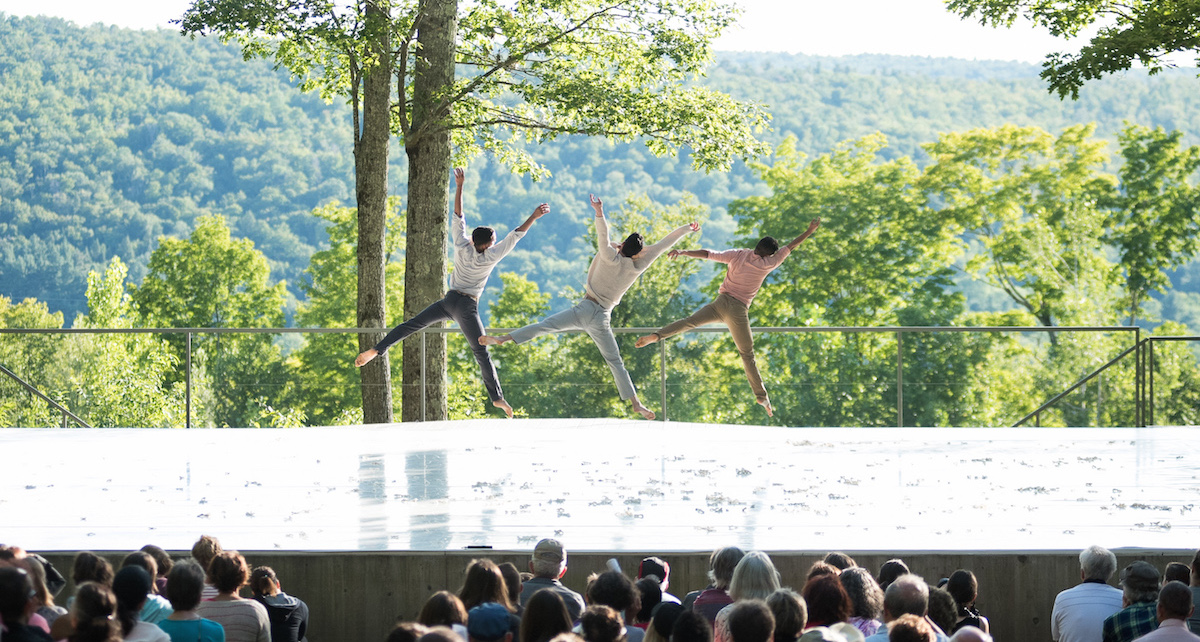 As spring is now here and warmer temperatures are on the horizon, so are our summer plans. And what better way to spend the summer than by being surrounded by dance? Here, Dance Informa highlights several of the country’s dance festivals, each of which offers unique programming, gorgeous settings and is bound to bring about summer inspiration! 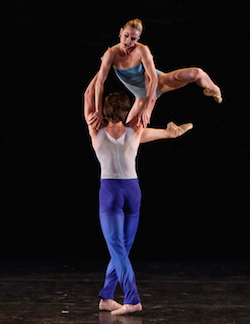 The Vail International Dance Festival, which features both performances and educational elements, was established in 1989, when the Bolshoi Ballet Academy of Moscow performed there for three sold-out shows, marking its first tour to the U.S. in 40 years. Since then, the festival, directed by former New York City Ballet Principal Damian Woetzel for the past 10 years, has grown to welcome dance companies from around the world in its Gerald R. Ford Amphitheater in the Rocky Mountains. The festival presents not only a star-studded roster each year but also commissions new choreographic works in its NOW: Premieres series, and offers educational dance programs for Vail Valley students.

“The festival has evolved into a place where dancers and choreographers and musicians come to try new things, to make new collaborations,” Woetzel explains. “It’s a very adventurous environment. The location is uniquely beautiful, with an amphitheater that provides the Rocky Mountains as a backdrop.”

The American Dance Festival (ADF) has long played a part in exposing audiences and dancers to the modern dance choreographers of today. Established in 1934, ADF has since been the site of over 660 premieres, over 400 commissions and over 50 reconstructions. In addition, ADF offers a three- or six-week school, a Dance Professionals Workshop and a winter intensive, all full of classes, panels and collaborative opportunities. 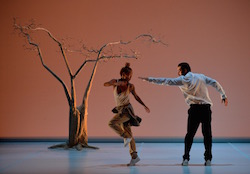 “ADF audiences can expect to see works that represent the rich and diverse work being created by today’s modern dance choreographers,” explains Sarah Tondu, ADF’s director of communications and marketing. “Our season is geared toward modern dance newcomers, our loyal ADF audiences and everyone in between.”

As well as being a performance venue for professional companies, Bates Dance Festival also prides itself in being a uniquely safe environment for artists and students to join together to study and share their dance. No auditions are required, although applicants must have studied modern and one other dance discipline for four or more years.

As a result, “the Bates Dance Festival is recognized for its commitment to creating a cooperative, non-competitive environment that fosters community, professional connections and a safe place in which to learn and experiment,” says Director Laura Faure. 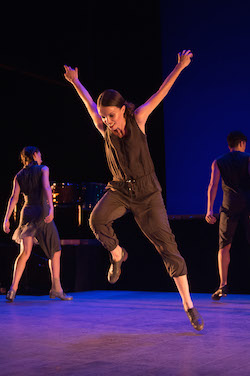 Audiences and participants can also expect to experience work by high-caliber artists. This year, for example, the Bates Dance Festival will welcome Dorrance Dance, Doug Varone and Dancers, and Kate Weare Company as performers.

Perhaps one of the most iconic summer dance festivals, the Jacob’s Pillow Dance Festival finds its home atop a historic mountaintop farm in Beckett, Massachusetts. In 1930, then leading modern dancers Ted Shawn and his wife, Ruth St. Denis, bought the farm as a retreat. In July 1933, Shawn and his Men Dancers began offering “tea lecture demonstrations”, initially to an audience of 45 viewers. Since that time, Jacob’s Pillow has grown into a festival that offers over 200 free performances seen by thousands of patrons each summer.

In addition, an important asset to the festival has been The School at Jacob’s Pillow, where students can participate in programs of multiple dance styles and study with actively working choreographers and artistic directors in rehearsals and in-depth coaching.

“The Pillow is a hub for innovative, internationally-renowned and diverse dance artists, and it also holds historical importance as a National Landmark and home to the longest-running dance festival in the United States,” says Mariclare Hulbert, interim director of marketing, communications and development. “Audience members can expect a multitude of dance genres from different parts of the globe on each of our stages.”

This year, the Pillow will host performers from Argentina, Germany, France, Korea, Algeria, Burkina Faso and all across the U.S., and genres will range from tap dance to ballet, modern to breaking, and more. 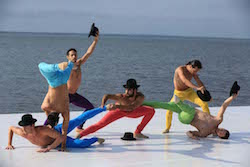 Fire Island Dance Festival is unique in its setting and in its cause. Taking place on a stage that overlooks the Great South Bay, this festival is run by Dancers Responding to AIDS (DRA), and world class dancers convene to perform on behalf of the organization. Since 1995, the festival has raised over $4.3 million, which goes to support AIDS and family service organizations, The Actor’s Fund’s HIV/AIDS Initiative and The Dancers’ Resource.

“Here, dancers of all genres are together sharing their talent and getting to know each other, all on behalf of DRA,” shares Denise Roberts Hurlin, the festival’s founding director. “Most have never met, and by the end of the weekend they are all fast friends, and sometimes collaborations are born. In 2011, Wendy Whelan met Kyle Abraham and Brian Brooks at the festival and planted the seeds of their future work, Restless Creature.”

This year’s performers will be announced this spring.

When Antonio Fini moved to New York City nine years ago, he realized the number of Italian artists in the city giving to the art of dance. As a result, he created the Fini Dance Festival to give space and recognition to those artists. The festival takes place annually in NYC and also in Crotone, Italy, and in Tirana, Albania. Previous honorees have included the late Luigi, Elena Albano, Edward Villella, Alessandra Coronoa and Alessandra Ferri. This year, Fini Dance Festival will celebrate the 80th birthday of legendary ballerina Carla Fracci, with performances by companies from Italy and NYC.

In addition to the festival’s performances, the festival will also host the Fini Dance Summer School, primarily for European dancers who wish to experience dancing and training in NYC.

“They will learn, and learn about, the works, styles and techniques of Denishawn, Martha Graham, Erick Hawkins, Merce Cunningham, Paul Taylor, Toby Armour, Michael Mao and Antonio Fini,” shares Fini. “The dancers will also take ballet classes evolved to prepare their body to take on proficiently and efficiently the challenges of the ‘bounty’ from different choreographers.” 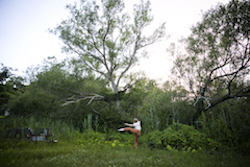 Zena Bibler in ‘With’ at Squires Pond, for Fleet Moves Dance Festival. Photo by Whitney Browne.

Fleet Moves Dance Festival differs from many festivals that offer performances of pre-existing works in that this festival focuses on the creation of work on location and in collaboration with local artists and ecologists. These performances tend to be small-scale, experimental and fresh, and the festival welcomes artists of multiple disciplines: dancers, visual artists, musicians, circus performers, ecologists, fishermen and poets.

“Fleet Moves is interested in the question, ‘What does it mean to be here, under these conditions, with this landscape, at this time?'” explains Zena Bibler, co-founder of the Movement Party, the organization that puts on Fleet Moves each summer. “Audience members are invited to join us both in practice, through daily Morning Movement classes, and in performance, through a schedule of culminating dances that move across the town of Wellfleet on the final days of the festival.”

Spoleto Festival USA, in Charleston, South Carolina, presents an array of performing arts options – dance, chamber music, jazz, opera and theater – over a span of 17 days each year since 1977. The festival began as a counterpart to The Festival of Two Worlds in Spoleto, Italy. Now, the venues take the shape of Charleston’s churches, theaters and outdoor spaces, allowing a glimpse into the history of the city as well.

“[The festival] can provide audiences with fascinating contrasts, sometimes within one day!” says Jennifer Scott, director of marketing and public relations for Spoleto Festival USA. “The festival also fosters and celebrates new work, providing a wonderful platform for choreographers to be adventurous.”