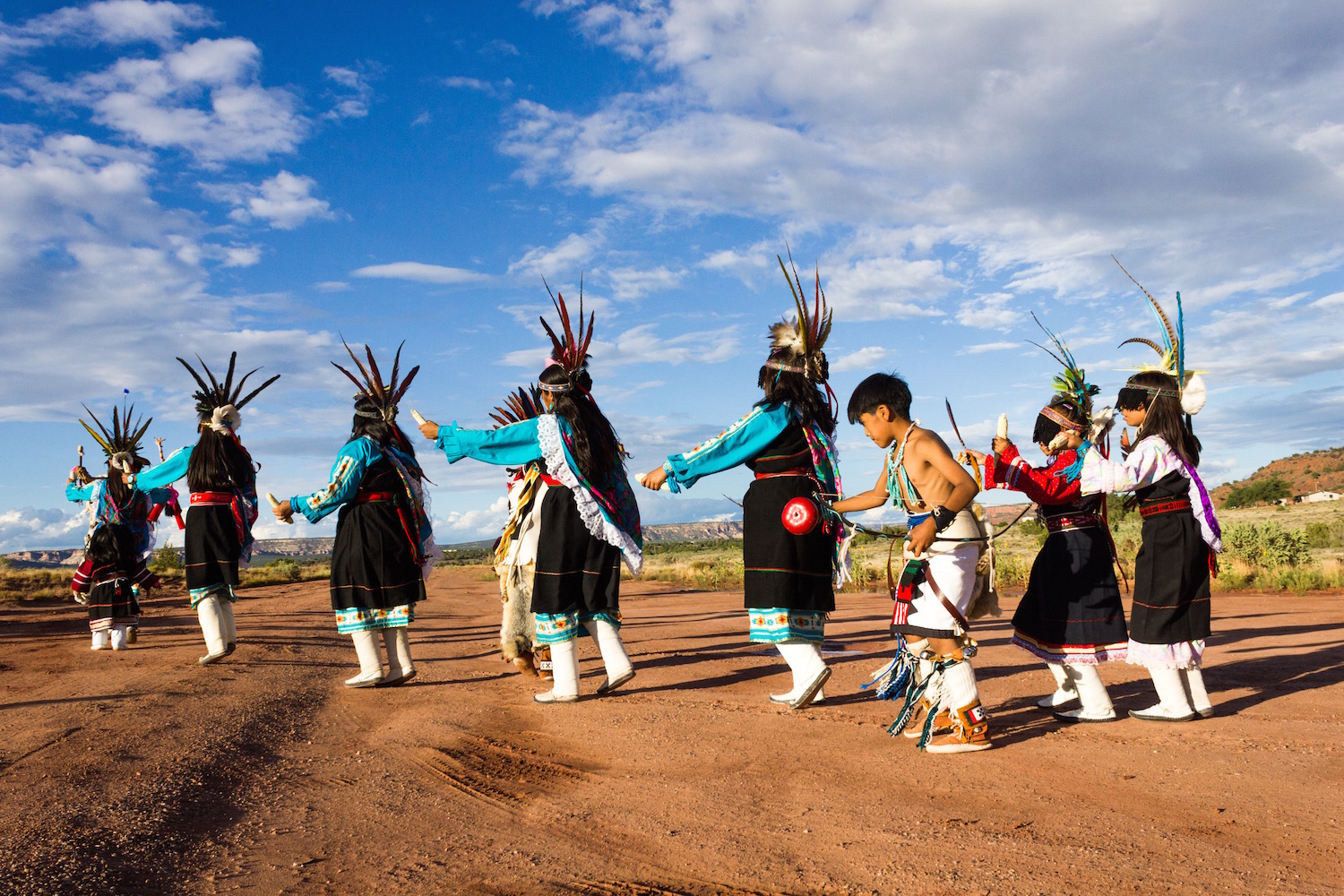 Nakotah LaRance freestyles along a sidewalk. He is gliding, popping and waving — and spinning the hoops of a venerable medicine dance of his Native people. LaRance, a world champion hoop dancer and Cirque du Soleil performer, is performing his captivating mash-up of hip hop and traditional hoop dance at the 2015 Santa Fe Indian Market, the world’s largest juried showcase for Native arts.

The 26-year-old from Ohkay Owingeh Pueblo, New Mexico, is lyrical and dazzling, laser-focused and relaxed, as he manipulates five 24-inch-diameter hoops. They become an eagle, a butterfly, a flower, a ladder representing life stages from infancy to old age and, finally, Earth’s globe. An electronics-plus-powwow-drum track from the group A Tribe Called Red drives the action. “Because A Tribe Called Red combines old and new, their music is perfect for this version of hoop dance,” says LaRance. 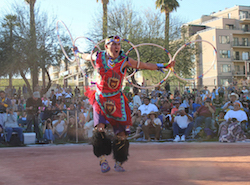 Nakotah LaRance, of Ohkay Owingeh Pueblo, exults as he hits the eagle figure in his world-championship hoop dance performance. Photo by Marian Denipah.

His father, Steve LaRance, named his son’s creation Hip Hop Hoop. The traditional form is a healing ceremony that restores physical and emotional balance but so is the modern version. Steve says, “Just look at audiences and how happy they are when they see it. The dance has done that.”

The hoop dance establishment has given Nakotah its stamp of approval — eight stamps, to be precise. His first win at the Heard Museum’s World Championship Hoop Dance Contest in Phoenix was in 1994 in the tiny-tots division. He was just four years old. Succeeding years saw three youth and three teen titles, and an adult world championship in 2015.

Dance is central to Native culture, explains Steve. “It’s our connection to the ancestors and the earth, and the drum is its heartbeat,” he says. “The hoop represents the turning of the seasons and the circle of life. My family feels blessed to be able to bring our dancing to the world. Our traditions were repressed for so long, and many were nearly lost.”

He is referring to the century-long period during which Native people were prohibited from dancing and conducting their ceremonies. In the name of assimilation, their children were shipped to notoriously violent boarding schools, where they were starved, beaten and forbidden from expressing themselves in their own languages and arts. Many died. Others survived, along with the will to continue their heritage ways. By the 1970s, the boarding schools were closed down or turned over to the tribes. In 1978, Congress passed the Native American Religious Freedom Act, and Natives could dance and worship openly again.

Past horrors may help explain the sense of triumph in another edgy Indian Market show that Nakotah was part of in 2013. He and a group of young Natives owned the stage with fast-paced break and hoop dancing. With their joyous appetite for innovation, the performers owned more than that. They were in control — repatriating and reformulating their identity as they wished. 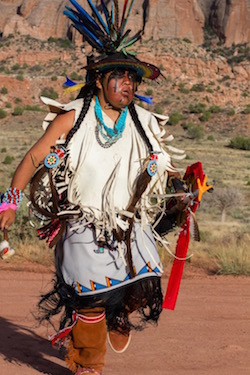 Two years of touring with Cirque de Soleil’s Totem let Nakotah see the world and refine his technique. “As a dancer, you have to develop an eye for other forms that can be relevant to yours,” he says. “For me, it was martial arts, like kung fu and tai chi, that gave me both more clarity and more flow. They also help you empty your mind, so your body can really go.” He learned martial arts from other Cirque de Soleil performers. “They were so generous,” he shares. “You could just say, ‘Can you show me that?’”

After 2011, Nakotah moved from the circus’ touring company to its special-events department, which produces projects like the opening ceremonies for the 2015 Pan American Games in Toronto. “I missed home and our traditions,” Nakotah says of his decision. His sister ShanDien LaRance and friend Eric Hernandez joined Totem’s road company and created a duet version of the role Nakotah had originated.

Along the way, Nakotah has also appeared as an actor in Steven Spielberg’s Into the West and other movies. He stars in Geronimo, a music video by electronic pop group The Knocks and Fred Falke. In the video, Nakotah dances in his pueblo home, then silhouetted against the desert sky.

Less touring means more time for Nakotah to teach children’s hoop dance classes. Some day — “after my knees give out,” he says — he’ll do even more of this. Being at home also lets him take part in his community’s traditional life. In performance, Nakotah may astonish onlookers, but when participating in ceremonies, he submerses himself in the ancient round. He becomes, says dad Steve, “just one of the dancers”.

To find Nakotah’s appearances, go to his Facebook page. Heads up, fans: This month, he’ll defend his world title at the Heard Museum in Phoenix.

#1. At the very traditional Zuni Pueblo in New Mexico, the dance group Anshe:kwe innovates within a heritage framework while creating dances for performances at home and around the country. Choreography is a collaborative process. “We sit down and brainstorm,” group leader and musician Serfino Cachini tells me after a rehearsal. “A group member or I will show a movement; we’ll all try it out, work with it, then decide together if it looks good or not.” The troupe practices daily and goes over everything collectively — from the steps to the music to the elaborate regalia.

The dance I saw at Zuni contrasted elegant, airy unison footwork for a corps of women with sinuous, grounded solo improvisations for the men. The improvisatory element emphasized a central aspect of the male roles. “We’re portraying warriors,” says dancer McKeffe Chapella, “and when warriors go into battle, they have to improvise.” 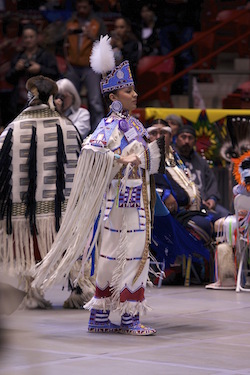 #2. The graceful Southern Buckskin dance style helped Cheyenne Brady become Miss Indian World 2015. The title is bestowed during a pageant that takes place during the Gathering of Nations powwow in Albuquerque. The huge annual powwow attracts thousands of members of more than 700 U.S. and Canadian tribes. For the dance portion of the pageant, Brady wore a richly beaded deer-hide dress and accessories. Her measured, regal steps caused the floor-length fringes of her sleeves to swing rhythmically in opposition, one forward and one back, as though stirred by a breeze.

Because South Buckskin is a very old style, the range of modifications that are allowed the dancer is narrow, Brady says. Creative expression occurs instead in the choices for the beadwork colors and designs. “My dress is a mix of old and new, in that it combines traditional Cheyenne designs with shiny modern beads,” she says.

Nowadays, according to Brady, some Native dance regalia has gotten extremely colorful, including even the brightest neon-type hues. “That is mainly an option for more modern styles, like Fancy Shawl, which is maybe a century or so old,” she explains.

Since winning her crown, the Sac and Fox tribal member has traveled countrywide as an indigenous role model and advocate for Native language and cultural preservation. She has started her master’s degree in American Indian Public Health at the University of North Dakota, and her accomplishments have been read into the Congressional Register. It’s been a whirlwind.

“In quick succession, I got accepted to grad school, got crowned, took my senior-year finals and spoke at Generation Indigenous, a White House gathering to honor Native youth,” Brady recalls.

For more on Brady’s appearances, see her Gathering of Nations blog.