Dancers are to be seen and not heard, right? Not so fast. Nearly 25 years ago, two young artists had something to say about a cause deeply personal to them — and the venture they launched has since proven just how mighty even one dancer’s voice can be. 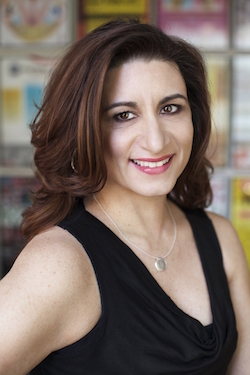 As members of the Paul Taylor Dance Company in the late 1980s and early 1990s, Denise Roberts Hurlin and Hernando Cortez were confronted with a frightening reality: Two of their coworkers, along with many more colleagues and acquaintances, had been struck by the HIV/AIDS epidemic. To see their friends struggling with an illness of which there was then little understanding and for which nearly no treatment options existed was a call to action for Hurlin and Cortez.

“It was a time when mortality was becoming very significant,” recalls Hurlin. “Having friends with you who are struggling with severe health problems becomes part of your daily life. It’s not happening to you, but you certainly have a window into what is going on. Back then, there were no medications other than AZT, which was somewhat ineffective, and people who had been positive for a long while were becoming very, very ill and looked very ill. HIV and AIDS had a face. It was a time of care, a time of reaching out to people and helping them through their transition to death.”

With the need for more substantial aid in mind and the strength of an ever-growing network of dancers behind them, Hurlin and Cortez founded Dancers Responding to AIDS (DRA) in 1991. Initially, their vision was to heighten awareness about HIV/AIDS and to raise funds to assist those afflicted, for whom the only prognosis during that era was death. But as medical research progressed and the spectrum of treatment possibilities developed, the notion that those diagnosed with the condition might be able to live with it rather than quickly die from it broadened the scope of DRA. 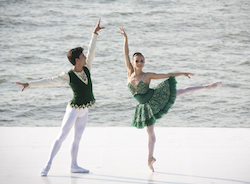 “From 1996 on, there was a noticeable change,” Hurlin says. “The ability to boost people’s health to the extent that they weren’t dying allowed us to refocus our attention. We became a part of Broadway Cares/Equity Fights AIDS [BC/EFA] in 1993, and pooling our resources has allowed us to maintain our voice. Today, whether you’re a dancer, a singer, a composer, a costume designer, a stage manager — your position doesn’t matter. The money that we raise as a united organization supports everyone in the performing arts.”

As DRA approaches its 25th anniversary, it looks back on another year of fundraising milestones in association with BC/EFA. With its primary annual events, the Fire Island Dance Festival and Hudson Valley Dance Festival, DRA smashed totals from previous seasons, bringing in $544,555 and $125,555, respectively. The two largest BC/EFA events, the Easter Bonnet Competition (April) and Gypsy of the Year (December), each raised well over $4.7 million in 2015, with stars from myriad Broadway, off-Broadway and national touring productions participating in the pair of six-week campaign periods. Since 1987, over $250 million has been collected and distributed through such efforts.

Where, exactly, does all this capital go? BC/EFA Executive Director Tom Viola explains: 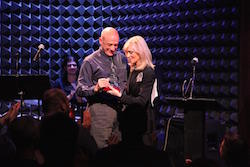 “Roughly half of the money we raise goes to the Actors Fund, which doesn’t just help actors. It covers the entire entertainment industry by supporting a safety net of social services for performing artists. The other portion goes to our national grants program for AIDS and family service organizations all across the country. That’s food banks, health clinics, delivery programs, housing programs — all sorts of assistance for folks living with HIV/AIDS and other life-threatening illnesses. DRA works within the dance community as we work within the Broadway community, helping us to expand our resources and bringing a great energy and enthusiasm to all we do.”

With a mission that benefits not only those with HIV/AIDS, but also the very performing arts population that makes events like Gypsy of the Year and the Fire Island Dance Festival possible, BC/EFA and DRA have created a self-sustaining web of support fueled by the passion and compassion of participants and contributors. Striking though the monetary figures may be, perhaps the most remarkable aspect of the organization’s design is that it allows every artist — regardless of financial status, fame and even free time — to make a massive impact. Hurlin (whose daughter, years after taking her first steps in a BC/EFA meeting, now dances with American Ballet Theatre) acknowledges that the dance population in particular is often in such dire need of funding that even donating time can be an immense hardship. With that in mind, DRA has established a variety of opportunities for those interested to get involved. 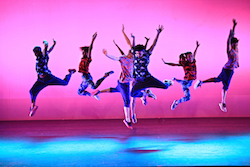 “One of the beautiful things we’ve seen is that dancers are always so willing and eager to help,” Hurlin says. “Alvin Ailey [American Dance Theatre] has been able to donate an entire night of its City Center season to DRA, and that’s a very special and amazingly generous thing. But it has the means to do it. For a small company that’s performing at the Joyce for the first time, an audience appeal is equally generous because it adds up to thousands of dollars. It’s a simple, affecting, heart-warming way to connect with an audience. Dancers get to break the fourth wall, which we normally don’t do in our art, and the audience has the experience of being spoken to directly by performers.”

Open communication amongst artists, patrons and those at the helm of the operation is both part of what makes BC/EFA and DRA unique and an element essential to their shared success. For all parties involved — whether they have a personal tie to the fight against HIV/AIDS or are invested in projects of the Actors Fund — the inherent human-to-human connectivity of the enterprise can be a reward unto itself. 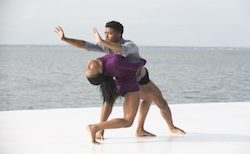 “There have been some fantastic artistic moments on stage that have also been tremendous fundraisers,” Hurlin relates. “And I always make sure that I talk about what we’re doing. You can be narrow-minded about your performance, about what it is you’re doing on stage. But the reality is that we’re here for a reason, and we want to make sure everyone is aware of it. It’s educational and empowering.”

Viola adds, “We really do look at every initiative as both an opportunity to fundraise and a means to start a conversation about how those funds will be used. I think that’s what keeps people engaged with us. If folks didn’t feel comfortable that the money they’re helping us raise was being put to good work, their support would fall away.”

That backing shows no sign of diminishing, particularly on the part of the performers, many of whom return to partake in their favorite events again and again. Hugh Jackman, Bernadette Peters, Daniel Radcliffe, Florence Henderson… The collection of artists who have repeatedly lent their star-power to BC/EFA could fill the Gershwin Theatre five times over. (Jackman, one of the most faithful advocates of the cause, set a record when he drew in over $1.7 million in donations during the limited Broadway run of his one-man show.) 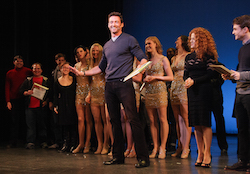 DRA has seen similar loyalty from within the dance community. Audience appeals are now regular production add-ons for companies large and small, and every year, dancers clamor to join in on the organization’s charitable programming. Choreographer Chase Brock, who is now preparing to tour the piece he created on his company (The Chase Brock Experience) specifically for the 2015 Hudson Valley Dance Festival, speaks fondly of his long-term relationship with DRA.

“There is no service organization I feel more passionate about than Dancers Responding to AIDS,” he says. “They have a galvanizing way of engaging many of the most talented members of the dance community to band together and lend their gifts in support of those in and beyond our community who are in need. Over the past 15 years, I have attended DRA’s performances with enthusiasm, given financially when I could, and jumped in to participate every time they’ve called – that includes creating five commissions!”

Ryan Kasprzak and Dancers – 2015 Gypsy of the Year. Photo courtesy of BC/EFA.

“Performances are stressful,” he reflects. “Opening night, matinees, closing nights, and even early morning kid shows have a way of causing nerves and anxiety for dancers and choreographers. DRA galas are the exact opposite. Everyone is happy and calm, and there is a sense of community on stage and off, making [these] benefits a joy to partake in. Intermezzo Dance Company’s involvement in the 2015 Fire Island DRA gala was such an uplifting, inspiring experience that we will be on our knees begging to come back next year.”

And having premiered a ballet duet at Fire Island in 2015, Artistic Director and choreographer Joshua Beamish of MOVE: The Company, expresses gratitude at the “opportunity to use my work to help better the lives of others in a direct way. [DRA] holds a unique place in our field, as it not only allows creativity to flourish, but further uses it as fuel to implement positive change.”

For more information on how you can make a difference with Dancers Responding to AIDS and Broadway Cares/Equity Fights AIDS, visit www.dradance.org and www.broadwaycares.org.