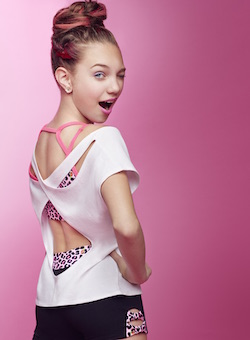 But now with Betsey Johnson’s recent collaboration with Capezio, fashion and dancewear have truly dovetailed. Yes, that Betsey Johnson—famous for her whimsical prom dresses, classic prints (skulls, roses, cherries, and checks), and funky fashion sense with over forty years in the “biz”—joined forces with Capezio, one of the dance industry’s top brands, to launch a dancewear line that brings playfulness and pizzazz from the runway to the dance studio.

“I was a dancer growing up. I wanted to be a Rockette!” says Betsey, who trained under ex-Broadway showgirl, Ann K. Pimm, in Wethersfield, Connecticut. “Later I transitioned more into cheerleading. But when I went off to school, I really focused on fashion design.”

Despite Johnson’s pursuit of a career in fashion over dance, dance has clearly been a huge influence in her design aesthetic—leotards, tutus, tights, and costume jewelry are all quintessentially “Betsey.”

Only in the past few years have studios dropped the mandatory “all-black”/strict wardrobe regulations to allow for more individual and fashion-forward dancewear. As a result, it seemed only natural for Betsey to reconnect with Capezio (with whom she worked with back in the 60s) to create a new dancewear collection for girls and teens. 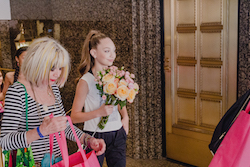 Betsey Johnson and Maddie Ziegler after an in-store event for Capezio. Photo courtesy of Capezio.

The exciting new collection launched this year and features classic “Betsey” fanciful tutus, sweetheart tops, and printed capris. The punk-rock ballerina look is perfect for the dancer who wants to stand out from the crowd.

“My collection is all about being fashionable and functional,” describes Betsey. “I’m used to working with all of these dancewear materials like stretch-cotton, spandex, and tulle.” Betsey’s extensive experience designing with these fabrics allows her to create fashions that really work—these are clothes to dance in!

And for the “face” to launch this new collaborative collection, Betsey chose none other than Maddie Ziegler, the thirteen-year-old superstar who became a household name thanks to Lifetime’s “Dance Moms.” 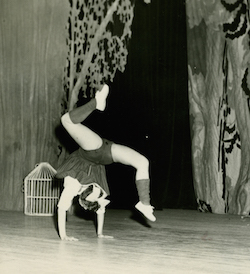 Betsey met Maddie at a taping of ‘Dancing with the Stars’ (in which Betsey competed with partner, Tony Dovolani) when Maddie was performing live with Sia. “Maddie ran right up to me,” recalls Betsey. “She knew exactly who I was and was so excited to meet me. Watching her dance, I knew she would the perfect face—the ‘it girl’ for my campaign.”

Maddie embodies the ‘Betsey’ dancer: confident, playful, and energetic, with a passion for life. “There’s definitely a ‘look-at-me!’ vibe to the collection, too,” adds Betsey.

“My favorite piece in the collection,” says Betsey, “is the reversible leotard with crisscross straps. It is so versatile and can be worn for dance, gymnastics, or even swimming.” 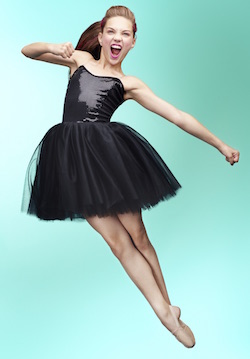 The Capezio Flagship Store in New York City held an appearance with Maddie and Betsey in July. “We were a great team,” remarks Betsey. “We had customers of all ages—old souls who have been fans of my work for years, and Maddie’s amazing young dance followers. The store was packed and clothing was flying off the racks!”

Betsey’s second collection for Capezio is set to launch in Summer 2016 and will feature another range of Betsey’s iconic prints including her classic cherry design. Young star dancer and Capezio Athlete Tate McRae will be featured in the coming collection. The Betsey Johnson collection for Capezio ranges from $20-$120 and can be purchased on Capezio.com and in Capezio stores across the country.

Betsey Johnson is known not only for her funky, fantastical designs, but also for doing a cartwheel-split at the end of every runway! And it’s no doubt that dancers will do the same (and many more turns and tricks) in her new collection for Capezio.