On November 13, ballet legends Oleg Briansky and Mireille Briane received the 2015 “Educational Visionary” Lifetime Achievement Award in a ceremony at New York City’s Clemente Center. Established eight years ago by Mark DeGarmo Dance (MDD), the annual event honors “visionaries who have promoted innovation in education through the arts” and raises money for the organization’s educational programming. Since 1987, MDD has provided arts intervention programs to underserved elementary schools in Manhattan and Queens. 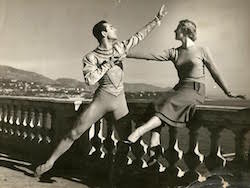 A still photo from ‘Happy To Be So’, a documentary directed by Yelena Demikovsky that looks back over the 50-year partnership of Oleg Briansky and his wife, Mireille Briane.

Briansky and Briane, who have been married and dancing together for over 50 years, could have been the inspiration for the popular hashtag #relationshipgoals. I spoke with Briansky over the phone the day after they received the award, and although he gave the interview, Briane stuck close by, interjecting comments in French and English that her husband often repeated. Other interviews and online sources have described the two as complementing one another; theirs is a “yin and yang” relationship that has allowed them to thrive – both individually and together – as dancers, choreographers and educators for many decades.

Both enjoyed successful professional ballet careers early in life. Briane was named a principal with the Grand Theater of Bordeaux, France, at age 16, and Briansky performed with Ballets de Paris, London Festival Ballet and New York Metropolitan Opera Ballet, among others. Before his performance career was cut short by arthritis, Briansky partnered many celebrated ballerinas including Margot Fonteyn and Maria Tallchief. “I never thought of becoming a teacher,” says Briansky. “I was born to dance. It was in my blood.”

In Happy to Be So, a 2008 documentary chronicling the couple’s extraordinary partnership, Briane says, “I was born to teach.” Her impressive resume includes faculty positions at the School of American Ballet, Dance Theater of Harlem and the Alvin Ailey School; she also led her own ballet school in London and taught at Ballet de Rio de Janeiro. In the early 1960s, Briane staged Brazil’s first ever performance of The Nutcracker.

Although they have traveled (and continue to travel) all over the world, Briansky and Briane are probably best known for bringing ballet to upstate New York. In 1965, the couple founded the Briansky Saratoga Ballet Center, then one of the first summer ballet programs in the United States. At the time, says Briansky, “Saratoga didn’t know what ballet was.” They said, “Belly dancing?” and he responded, “No, ballet dancing.” But the program quickly took off, in part thanks to the high quality, intense training Brianksy and Briane offered. In addition to a rigorous, pre-professional ballet curriculum, the couple also stressed overall health, encouraging students to swim after classes and take care of their body. They offered classes in pantomime, modern dance and dance history, and often took students to see the New York City Ballet perform.

For 45 years, the Briansky Saratoga Ballet Center thrived, training hundreds of students, many of whom became influential teachers and performers themselves. Among those is Lori Klinger, artistic and executive director of Rosie’s Theater Kids, an educational outreach program she founded with actress Rosie O’Donnell to introduce kids in New York City’s public schools to Broadway and musical theater. Klinger presented Briansky and Briane with the Lifetime Achievement Award. 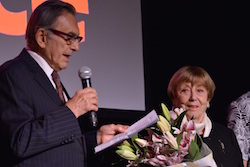 Briansky says both Klinger and Weinstein credit their success to their experiences as students at the Briansky Saratoga Ballet Center. He recalls their words at the ceremony the previous evening. “We owe everything to you,” they said, referring to both Briansky and Briane. “If we hadn’t met you, we wouldn’t be here.”

In its last few years, the Briansky Saratoga Ballet Center moved from Skidmore College to Mount Holyoke in Massachusetts. It officially closed after the summer of 2012, but Briansky refuses to call himself “retired”. Now in his 80s, Briansky has simply moved on. He’s writing a memoir and said he and his wife are talking to a friend about starting a ballet program in Brazil.

Given the couple’s ongoing contributions to the dance field, a “Lifetime Achievement” award may be premature, but the award was well deserved.

Just as Briansky and Briane left the ceremony, they learned of the terrorist attacks on Paris. Briane is Parisian, and the two travel to France every year; they speak French at home even though Briansky’s native language is Russian.

Both were of course devastated but not entirely surprised given the current political climate. “Here’s a word many people don’t like,” says Briansky. “Discipline. You have to follow rules. In an unruly world…dance helps.” His voice trails off, and he repeats, “Dance helps.”