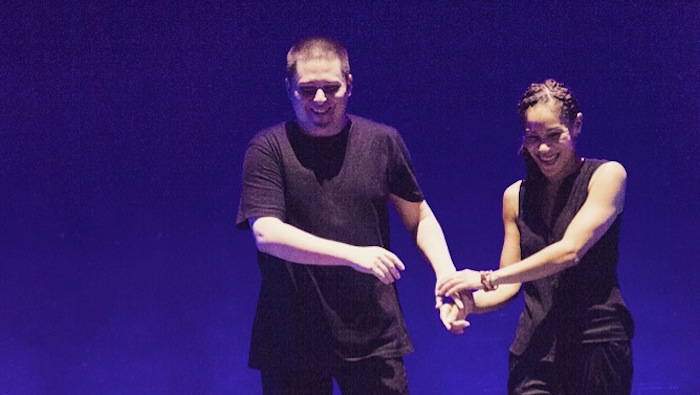 The Text is a short film created by tap dance greats Ayodele Casel and Anthony Morigerato. The title captures both the storyline and the commentary provided with its melding of 1930s style with contemporary realities. Dance Informa had the pleasure of speaking with Casel and Morigerato, who say, “As artists, we create because we must. We don’t have a choice, but it is awfully nice when what you create speaks to the audience in a meaningful way.”

With positive attitudes like that, it’s no wonder big things are happening and on the horizon for this duo and the newly formed open forum for dancers and artists they helped create and are calling Operation: Tap. You’re going to want to keep your sights on these two! 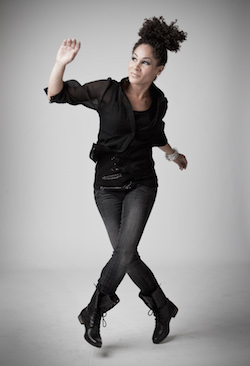 What is similar between the the 1930s pairing of Ginger Rogers and Fred Astaire in Top Hat and The Text?

AC: Cheek to Cheek has to be one of the most iconic dance scenes ever filmed. Our intention was never to recreate but rather develop a work based on our love for tap, great music and these particular impeccable dancers. Neither of us are ballroom dancers, but as tap dancers it was important to create authentically from who we are; so what stands out as different is our particular style of dance and our current voice culturally, as it relates to tap.

AM: Prior to Fred Astaire, dance numbers were captured and shot in a very different way. The pieces would be filmed to get audience reactions or to get a shot of the upper body and, in either case, miss crucial elements of the dance. Fred Astaire believed that the dancer should be shot full body and with very few edits in the film, if any. Ideologically, we wanted to capture and pay homage to this sensibility as much as today’s filming of dance utilizes high-octane editing. This was a source of contention between the Director of Photography (Matt Lucas) and me on set, as he wanted to film additional footage from different perspectives or takes. This was shut down due to the fact that, in editing, there would be an overwhelming temptation to use some of these shots that would have no doubt been beautiful. The framing, photography and editing – both sound and picture – of the dance was done exactly as would have been in a Fred Astaire and Ginger Rogers dance. The technical execution of the photography is more an homage to Fred Astaire than the dancing itself.

The sounds of the taps were recorded in a sound studio and then dubbed to synchronize with the music and video footage. What was this process like?

AC: Sound is arguably the most important element of tap dancing, and it was imperative for us to have a true and clear blend of our individual sound. We recorded the dance at 6:30 in the morning! It was actually one of the most fun aspects of the shoot. We recorded it a few different ways so we would have options in post-production. I remember a few sections were challenging because the dance covers way more space than the 4×4 wood where we recorded. It was interesting trying to figure out how to get the steps in without changing our body direction and without getting tangled up in the headphone cords!

AM: We labored with love to make sure that this element of the process was made as perfect as possible. Editing was crucial to get the ambiance of the space in conjuncture with the sound that was captured. I think this was probably the aspect of making this film that I was especially pleased with. 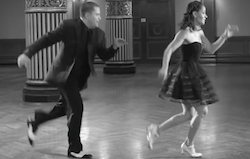 A Screen Shot of ‘The Text’ featuring Anthony Morigerato and Ayodele Casel. Photo courtesy of YouTube.

Why did you choose this particular Oscar Peterson arrangement of ‘Cheek to Cheek’?

AC: We both absolutely love Oscar Peterson. I mean, there isn’t an arrangement of his that isn’t sophisticated, challenging and gorgeous. This arrangement swings so nicely, and his interpretation of the song melodically is fun and playful. We tried to honor both his musicality and the groove of the song as we were choreographing. Anthony is really sensitive to intricate melody lines. It’s one of the things I admire most about him.

What’s the story embedded in this short film?

AC: It’s a simple story, really. Guy and girl on first date. Guy is waiting. Girl is late. Guy daydreams of a romantic and skillful dance interaction between the two and snaps out of it with the sound of the girl’s cab arriving, honking its horn. I’m happy with what it implies and accomplishes in a span of four minutes. He goes way back to not only a grand ballroom in black and white but a 4:3 aspect screen ratio. It’s simple but fun and allowed us to be fancier than we might be in any other dance scenario.

New York’s Prince George Ballroom is a beautiful setting for this work. What is it about the space that spoke to you creatively?

AC: It’s grand. It has beautiful, expansive wood floors. Of course, we weren’t allowed to really tap on them, but I even enjoyed that element and nod to Fred and Ginger’s films. They rarely, if ever, had taps on the bottom of their shoes. It was the dubbing of the sound that completed their magic. I had to put black tape on the bottom of my shoes and Anthony had some sleek dress shoes that looked like they could be tap shoes.

AM: From a logistical stand point, it was one of the few affordable spaces in NYC that achieved the feeling of being in a Hollywood musical of the 1930s. When I saw it, and heard the price point for being able to film in it, I knew this was the only place we could, should, or have to film this. 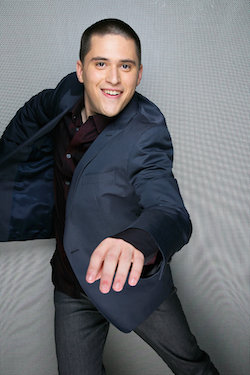 What is it about Fred Astaire and Ginger Rogers that continues to inspire contemporary artists?

AC: They were the reason I wanted to start tap dancing. I was obsessed with them in high school and jumped at the opportunity to take a tap class my sophomore year in college at NYU. I was attracted to their elegance, their style, their casual and smooth ability to make dance seem effortless and fun. I think those are a few of the reasons they continue to be so relevant. They are trendsetters and are the epitome of ‘classic’ and you know, ‘classic’ will never go out of style.

AM: I believe it is the quality of their work that stands up to the scrutiny of time passing, trends changing and tastes morphing. The themes and stories they told through their dances are timeless.

What other projects are the two of you excited about right now?

AC: As a team, along with Mike Minery, we are really focused on continuing to grow a community at Operation:Tap. It’s a little over a year-old, and we continue to develop content that is useful to tap students, teachers and enthusiasts. I am embarking on my acting career! I began tap dancing as a result of being an acting major, and I seem to be living two lives. I’m currently stretching my acting muscles and intend on marrying my two skills and loves very soon. They’ve had a long engagement! It’s time to tie the knot. I hope you continue to stick with us on our artistic journey! It’s going to be worth it!