Dance Informa journalist Allison Gupton recently caught up with two old friends, Will Burton and Nathan Madden. The trio previously attended a performing arts high school together in Atlanta and are now all teaching, choreographing and performing.

Here, Gupton asks Burton and Madden questions on their latest endeavor – gracing the Broadway stage as ensemble members in the Tony Award-winning musical An American in Paris. Read excerpts of their conversation below and see why Gupton described them as “so wonderful and unique” with “big and kind hearts.”

Congratulations on starring in An American in Paris! Can you tell me a little bit about your individual roles?

Will Burton
“I’m a member of the ensemble, and I understudy the roles of Henri Baurel and Adam Hochberg, played by Max von Essen and Brandon Uranowitz.”

Nathan Madden
“I’m in ensemble member. And if it weren’t crazy enough to just be in the ensemble of this beautiful but challenging production, where we carry every single piece of furniture while singing dancing, twirling, lifting, acting and smiling, I also am an understudy for both the lead roles of Jerry and Henri. It’s a lot, but amazing!”

Did you both watch the movie before you began this process?

Burton
“Of course! I loved the movie long before I even auditioned for the show. But once I found out I had been cast, I gave it another viewing… or two…or three.”

Madden
“I had seen it before and definitely watched it again before my first audition, if only to familiarize myself with the story and the feel of it.

We have created something very new, different and original that is definitely not a recreation of the film. However, we often tip our hat to the same love of dance, washes of color and beauty, and, of course, [it’s] all set to the moving music of Gershwin.” 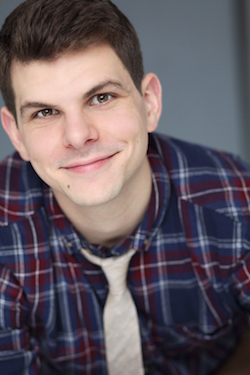 ‘An American in Paris’ ensemble member Will Burton. Photo by Ted Ely.

What is the most challenging aspect of the show for you?

Burton
“For me, the most challenging part was keeping up with the rest of the insanely talented ensemble during the rehearsal process. A majority of the cast comes from reputable dance companies across the country and internationally (New York City Ballet, San Francisco Ballet, Miami City Ballet, NDT, etc.), so the level of dancing from the people around me was greater than anything I had ever experienced. I went to school for musical theater… I really had to challenge myself to step out of my comfort zone and work hard to continually improve that skill set.”

Madden
“Stamina! I truly love doing the show and am inspired by those around me night after night after night, but I sure hope I can last as long as I want to with the show. It is truly the hardest job I’ve ever had. What we are being asked to do in this show eight times a week… Whew! I really don’t know how we do it!”

What was it like premiering the show in Paris and then moving to Broadway?

Burton
“Mind blowing and life altering. Paris is one of the most beautiful, romantic, culturally rich places I have ever experienced. I fell in love instantly and never wanted to leave, even to come to Broadway. The city’s response to the show was overwhelmingly positive. The theater was a historic and beautiful place to work in the heart of Paris right along the Seine River. The people were all lovely and extremely helpful in acquainting us with French life. The whole experience was a dream.

Of course, moving back to NYC and debuting the show on Broadway was an adventure. I vividly remember walking to the Palace Theater for the first day of technical rehearsals, being surrounded by the bustle of Times Square, and looking up at our beautiful, attention-grabbing marquis thinking to myself, ‘Is this really happening to me?’… totally surreal.”

Madden
“It was truly a dream come true. Not only were we in the city, where we got to live and eat and breathe Paris, we had the pleasure of finding a family in France with the Theater Du Chatelet. They were the sweetest and truly an extremely responsive audience.

Then moving to an English speaking audience here on Broadway, we really were able to find the humor and the pace of the show, which added a whole new layer of fun.”

What is your favorite scene/song/dance number to perform in An American in Paris and why?

Burton
“There is a 15-minute ballet toward the end of the show which, while it was being choreographed, I thought would be the end of me. It was exhausting, technically difficult, insecurity-inducing and overwhelmingly exciting. Once it was complete, I remember thinking, ‘If I do this eight times a week, I’m going to die.’ Seven months later, it is my favorite number to perform every night. First, it is prolific choreography and the audience loves it, which makes it hugely gratifying. Second, it is an intense workout, which also makes it hugely gratifying to complete. Third, it is the last major dance number in the show, so the cast is really able to throw all of their remaining energy into it. Because it is pure ballet and there is no singing or set moving or anything else to worry about, you’re able to become completely focused on the movement. I love that feeling. Being in the zone is such a rush.”

Madden
“I really love doing ‘Stairway to Paradise’ because the lights are so bright you can actually see the audience, and usually they’re smiling, which is a good sign. I do have to say though, finishing the ballet and holding Lise (Leanne Cope) on my shoulders center stage and hearing the audience erupt with applause is truly an amazing moment. I think that’s my favorite.”

What was it like working with choreographer Christopher Wheeldon?

Burton
“The guy is a master! Being around him in his element is like watching Monet paint. He understands movement and stage pictures like no one I’ve ever encountered.

I’ll say too, for me as a non-dance company dancer, he worked extremely fast. It took every drop of my focus to be able to keep up. However, because of the fast pace, he was able to more quickly identify what worked and what didn’t, and make changes accordingly. The show (choreography in particular) was constantly changing right up until we opened in Paris, and then once we got back to New York. Chris’ creativity never waned.”

Madden
“Agh. He’s a perfectionist. And I love him for it. He truly is an all-around genius and he’s always thinking of every small detail and demanding excellence. He brings the discipline of the ballet world and yet he’s not afraid to laugh with his coworkers and at himself, which makes for a wonderful process.

He often admits when he doesn’t know exactly what he wants next but he’ll go home and mull it over. I’m sure he’ll dream about it, or not sleep at all, but will come back with the perfect answer. You know it will be both challenging and beautiful.” 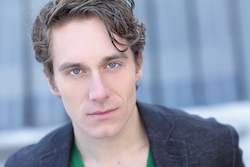 How is An American in Paris different from other Broadway shows?

Burton
“It uses dance and movement to tell the story as much as any other element. Is isn’t unheard of considering the way Agnes De Mille choreographed dream ballets for shows like Oklahoma!, but especially in modern musical theater, Chris has upped the ante for incorporating dance in the storytelling of a musical.”

Madden
“I really feel it’s the first of its kind and yet it draws from so much Broadway history walking this line between the old and the new. I feel like it is everything you want a musical to be. The difference lies in there not being a separated dance chorus, and then a vocal chorus, or even stage hands and costumes moving around the set pieces. Nope. It’s all us. It’s all us.”

What have you learned about yourself while working on An American in Paris? Has the process and show experience changed you in any way?

Burton
“The first thing I learned about myself is how important it is to see the world. The way experiencing another culture opens your mind is something everyone on Earth would benefit from.

The process was also a reminder of how passion and hard work is worth every ounce of energy you invest. Finding something you’re passionate about and then pouring yourself into it can take you further and give you more fulfillment than you ever realized.”

Madden
“You know, it really has. It has asked so much of me. In some ways, I feel I’m returning to my days at ballet school where you judge yourself constantly in the mirror, and yet I’m letting a little bit of that go to know that I belong here. You begin to know that you’ve worked so hard in all these different disciplines and you’re finally in a show that is exercising all of them. I’m loving it and I am inspired daily by my coworkers. ‘Who could ask for anything more?’”

For tickets and more information on An American in Paris, visit www.anamericaninparisbroadway.com.

Photo (top): The Company of An American in Paris. Photo by Matthew Murphy.