More than just a triple threat, Jared Grimes has explored (and excelled in) nearly every facet of show business: performing, choreographing, teaching, and producing.  This spring, Grimes will take on a new adventure—starring in the brand new, star-studded, highly anticipated New York Spring Spectacular at Radio City Music Hall.

“The New York Spring Spectacular is an amazing love letter to New York City,” explains Grimes.  “It really represents what it’s like to live in the greatest city on Earth.”  And who better to help tell this story than Grimes himself?

A true New Yorker, Grimes was born in Jamaica, Queens and his mother was his first tap teacher.  When his family moved to North Carolina, Grimes excelled in tap, jazz, and hip-hop along the competition circuit.  He was even scouted by the North Carolina Youth Tap Ensemble and toured all over the world with the company.  But after high school, Grimes found his way back to New York City where he received his Bachelor’s degree at Marymount Manhattan College.

After graduating, Grimes almost immediately took to the stage.  Some of his credits include tapping in After Midnight on Broadway, acting in “Fringe” on FOX, assisting choreographer Kenny Leon in Holler If You Hear Me, dancing for Mariah Carey, producing live shows like Broadway Underground and Run the Night, and teaching tap and hip-hop at Broadway Dance Center.  In his career, Grimes has truly done it all: Broadway film, TV, producing, and teaching.  “I actually don’t get nervous before I go on stage,” admits Grimes.  “I do get anxious—very anxious.”  Whether tapping on a subway platform, on a Broadway stage, or in the studio, it is clear that Grimes has to dance—and boy, are we glad! 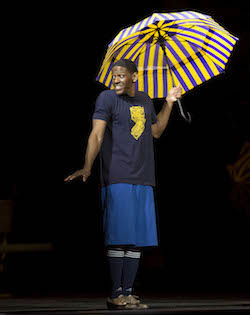 The New York Spring Spectacular, which begins previews March 12th and runs from March 26th-May 13th, boasts some pretty “spectacular credits.”  The show incorporates state-of-the-art 3D special effects and never-before-seen large-scale puppetry.  Grimes’s costars include the Rockettes, Broadway’s Laura Benanti, and Derek Hough from “Dancing with the Stars.”  The creative team includes Diane Paulus, Randy Weiner, Mia Michaels, and Warren Carlyle (with whom Grimes collaborated on Broadway’s After Midnight and City Center’s The Cotton Club Parade).  “Warren Carlyle is simply the best,” remarks Grimes.  “He is a genius when it comes to his creative visions and ideas.  He is always an absolute joy to work with and New York Spring Spectacular is no exception.”

The New York Spring Spectacular celebrates the magic of New York City with numbers dedicated to fashion, the stock exchange, and the weather.  You’ve probably seen the clips on Instagram where Grimes becomes a modern-day Gene Kelly, singing and dancing in the rain in a pair of tap-shoe Wellies.  “Dancing in the rain is one of the coolest things I’ve ever done in my life!” he explains.  “Dancing with the rain machine is like actually dancing in a storm, but better!  The floor is not slippery, yet it allows me to slide easily so I can do almost anything I want out there.  The biggest thing I have to be aware of technique-wise is making sure my moves create a big splash, not just a big sound!”

And, of course, what about sharing the stage with those legendary Radio City Rockettes?  “Dancing with the Rockettes is so much fun!” says Grimes.  “They truly personify class and glamour and I feel lucky to dance with them. Their athleticism is also beyond compare.”

To learn more about the New York Spring Spectacular and to buy tickets, visit www.newyorkspringspectacular.com.