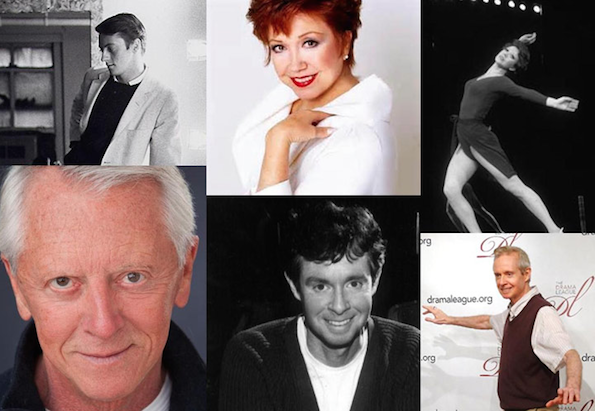 On January 24th Steps on Broadway hosted “Hear it From the Pros: A Conversation with Broadway Insiders” as part of their Artist Talk Series. The evening featured Grover Dale, Donna McKechnie, and Randy Skinner.

Patricia Klausner, Director of Marketing at Steps, began the discussion by asking how each dancer started their career in show business. Grover Dale had a knack for business right out of the womb.  As a kid he would sell magazine subscriptions, candy, and potholders around town.  One day, a woman asked if Dale would take her son to tap lessons.  In exchange, she would give him one dollar and pay for him to take tap as well.  “My neighbor kid ended up quitting,” remembered Dale.  “But not me!” Later on as a dancer in New York, Dale performed in L’il Abner, the film of The Unsinkable Molly Brown, and in the original cast of West Side Story.  Dale worked again with Jerome Robbins, co-directing Jerome Robbins Broadway (and sharing the Tony Award for Best Direction of a Musical).  In 1999 Dale founded Answers4Dancers.com, an online resource that works to “empower dancers and choreographers to think, to grow, and to create satisfying careers for themselves.”

Donna McKechnie’s break-out story sounded like it could have been a movie itself: before even graduating high school, she ran away from home to pursue dance in New York City.  Her big break was How to Succeed in Business… on Broadway.  McKechnie went on to star in Company, Promises, Promises, On the Town, the national tour of Sweet Charity, and, of course, as Cassie in A Chorus Line (for which she won the Tony Award for Best Actress in a Musical).  Since her time on the Broadway stage, McKechnie has published a memoir and starred on the big screen.  She currently choreographs at regional theaters, teaches musical theater, reconstructs choreography with American Dance Machine for the 21st Century, and performs her one-woman show, My Musical Comedy Life.

Randy Skinner began tap dancing in Ohio at the age of four after his parents realized his infatuation with music and movement.  Skinner worked and served as an apprentice for John Kenley’s summer stock productions.  Then after moving to New York City, Skinner’s big break came with Broadway’s 42nd Street.  In fact, Skinner received a personal phone call from Gower Champion, asking him to be assistant choreographer.  “Gower really wasn’t a tapper,” remarked Skinner, “and he would be the first one to tell you that!  But he was smart and knew to ‘fill in the gaps.’  He hired Karen Baker and myself to assist him with the tap choreography.” Skinner currently works as a director/choreographer (and frequent guest teacher at Steps on Broadway).  Some of his credits include the revival of 42nd Street, White Christmas, and many shows for Encores! Including their most recent production, Lady, Be Good (2/4-8).

But reveling in these three legendary careers was only the start of the event.  The main focus of the discussion was on how to stay relevant in the industry, a tremendous skill that Dale, McKechnie, and Skinner have clearly all mastered.

“It’s essential to find joy in the classroom,” said Skinner.  “You have to still love the process of dancing and learning even when you’re between jobs.”

“Woody Allen said that eighty percent of success is showing up!,” included Dale.  “Keep hold of those survival skills: save your money, invest in your talents, make things happen.  Dancers today are creating their own projects instead of just waiting to be discovered.  That’s pretty amazing.”

“I would advise dancers to invest in lessons: acting, voice, peer groups, you name it,” added McKechnie.  “Also, be aware of how you talk to yourself.  We get enough criticism as it is—don’t keep a little Nazi general on your own shoulder.  Respect your growth, have faith, and set goals for the future.  Ultimately, remember what brings you love—and do that.”