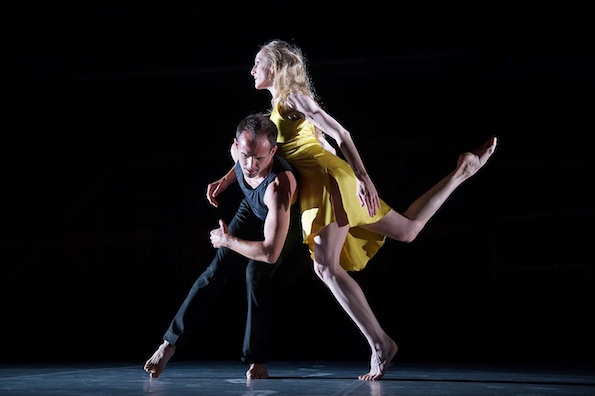 Each work is varied and interesting, showing both the impeccable skill and technique of both Whelan and her male counterparts. The show begins with Cerrudo center, in the spotlight on a blank stage. Within moments we are treated to his beautiful, unique and fluid movement. The couple displayed effortless partnering as their bodies created stunning shapes. It’s end was a nod to the partnering of the final piece of the evening by Brian Brooks, as Whelan held herself off the ground onto Cerrudo’s body with just one arm and cycled her legs across the stage as they left us wanting more.

Second was Conditional Sentences by Beamish and Whelan. The work felt exactly like its name; a series of separate sentences, with the two sometimes conversing together and at other times totally disconnected. The choreography was quite pedestrian at times, and very quirky and geometric. Beamish was in his element. He gave passion and oomph to even the simplest of movements. He is a commanding performer who dances bigger than his stature. The movement was unconventional and emotionless, although Beamish managed to add zeal to every single move. Whelan was very neat and precise, but her movement needed a little more intent and life. 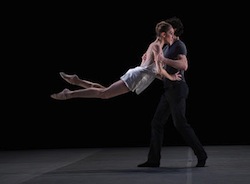 In Kyle Abraham’s The Serpent and the Smoke we saw glimpses of Whelan’s internal restless creature. The animalist choreography and dark, brooding set drew our attention and brought a more gritty and earthy work to the program. The movement was fascinating and more organic than the previous works, allowing Whelan to play with a movement style very different to most of her performances for NYCB. She showed her strength with many sustained relevées, including difficult relevées with a controlled forward bend. Whelan is a rock!

A highlight was when she pulled her hair out and set it free as she danced in a beam of light across the stage, although Whelan could have showed more abandon. The movement style sat perfectly on Abraham, who is a breathtaking performer.

The true highlight of the program, and a perfect piece for the finale, was Brian Brooks’ First Fall. This work displayed Whelan’s trust in their partnership and her and Brook’s sheer core strength. Whelan’s stamina never faulted, even though she had just performed three other demanding works. In a bright yellow dress and with her hair down, this was the first piece where I felt that Whelan truly felt free and she embraced the joy of dancing. The work was the prettiest of the four and was a series of interesting and difficult partnering sequences and gorgeous lines. As the name suggests, the work involved many falls, where Whelan would fall backwards, without looking or flinching, onto Brooks’ back. The audience was transfixed. It was a stunning end to the night. 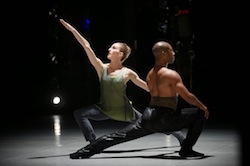 Restless Creature was a treat, not just because it is a privilege to see Whelan perform, but because the four male dancers and choreographers she worked with are all so talented with varied and exciting work. My only disappointment was that Whelan never donned pointe shoes in the program, unlike her photos in the marketing imagery, which suggest that she dances at least one of the works en pointe. She is truly in her element upon her toes. Whelan embraced the contemporary aesthetic, but I felt like she was a little too refined for some of the gritty choreography, and at times she lacked emotion. She did without a doubt, however, display her impeccable technique, sheer strength and stunning long lines. Whelan is always a vision on stage.