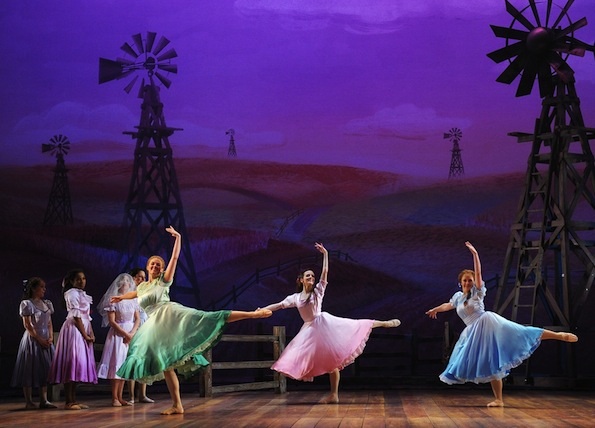 A reflection on the classic Broadway choreography of yesteryear and the musical theatre scene today by a Broadway fan.

In 1943, Agnes de Mille started a revolution—a dance revolution, that is. As a rookie choreographer for Broadway’s new Oklahoma!, de Mille gave dance meaning. Before her, song-and-dance musicals of the early 20th century were just that: song and dance production numbers haphazardly thrown into a thematically related book. Or, as in the case of the Ziegfeld Follies, there was no plot at all. Vaudeville-style Broadway shows of the 1920s and 30s featured a montage of silly sketches, celebrity song duets and the Ziegfeld girls, a troupe of beautiful all-American chorines who pranced and paraded across the stage while dressed up as anything from birds to battleships.

Frankly, de Mille had something else in mind. She sought to make dance an integral part of the Broadway musical rather than just a fun and flashy side note. Oklahoma’s legendary number was the 18-minute first act finale “Dream Ballet.” As Laurey slips into a dream, the ballet begins with a romantic pas de deux between Laurey and her true love, Curly. The duet is delicate and loving as Curly gently embraces Laurey and lifts her into a graceful overhead grand jeté or carefully dips her in his arms. The female ensemble enters and help Laurey prepare for her wedding. But after Laurey walks down the aisle, Jud, Curly’s rival, removes her veil. Suddenly Laurey’s dream turns into a nightmare. The lighting darkens from sky blue to hazy amber and the scene becomes a dance parlor where men are rough and women are handled. The line of parlor girls and cowboy drunks capture Laurey so that she must join in their honky-tonk kickline. At the end of the ballet, Curly returns to fight Jud for Laurey’s love. After an athletic brawl, Jud kills Curly. He then seizes Laurey and carries her off into the dusty distance.

Theater writer Molly Smith wrote: “The original New York Times review hailed the ‘Dream Ballet’ as a first-rate work of art… it actually carries forward the plot and justifies the most tenuous psychological point in the play, namely, why Laurey, who is obviously in love with Curly, finds herself unable to resist going to the dance with the repugnant Jud. Many a somber problem play has… failed to illuminate it half so clearly after several hours of grim dialogue. Yet, this is a ‘dance number’ in a ‘musical show!’” 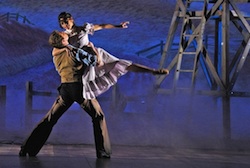 Stephen Hanna and Jenna McClintock in the “Dream Ballet” sequence from Lyric Opera of Chicago’s 2013 production of “Oklahoma!” Photo by Dan Rest.

In the piece, in No Intermissions: The Life of Agnes de Mille, Carol Easton describes the ballet as “revolutionary because it was essential to the audience’s understanding of the characters. It would express emotions that words could not convey.” Rather than spending a three-minute dance number commenting on what had taken place in the prior scene, “The Dream Ballet” allowed the audience to go inside Laurey’s head as she realized her true love for Curly.

Dance didn’t just happen; it did something, it told the story.

Soon came the reign of the famous director-choreographers: Gower Champion, Jerome Robbins and Bob Fosse. “These were people who believed that the meaning of a show could be contained in its dancing,” explained Joan Acocella in her article “Dancing in the Dark.” We became enthralled in the teenage gossip in “The Telephone Hour” of Champion’s Bye Bye, Birdie. We felt the tension and rivalry between the Jets and the Sharks in “Dance at the Gym” of Robbins’ West Side Story. And we empathized with Charity’s yearning for a life outside the dance hall in “There’s Gotta Be Something Better Than This” of Fosse’s Sweet Charity. Without these famous pieces of choreography (and others by Champion, Robbins and Fosse), their respective musicals would be undeniably incomplete.

But nowadays, choreography is different. It seems as if dance on Broadway has regressed to the flashy song and dance numbers of yore. A musical takes place in the 1920s or 60s so the creative team throws in a stereotypical decade-appropriate production number like the Charleston or the Twist. We see a character fall in love at first sight. But then he’ll dance about that moment for three repetitive minutes. There’s no growth—no new understanding that comes from the dance other than, “and now, a dance break.”

A possible reason for this is Broadway’s pattern of putting pre-existing stories on stage: musical adaptations of films (Rocky, Bullets over Broadway), books (Matilda, Wicked) and biographies (Jersey Boys, Beautiful). While many of these musicals have been “hits” in their own right, the books and the scores are to thank rather than the choreography. All of these stories “worked” as films, books or biographies without dancing. When dancing is added, that’s all it is: an additive, a condiment, an extra. Unlike Oklahoma!, dance isn’t necessary to the story of these musicals. But dance is pretty, it’s spectacular, it’s entertaining—so it’s added. 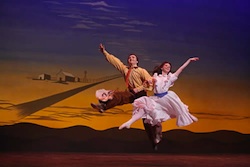 I am not saying that each dance number has to be a de Mille “Dream Ballet,” a marathon-length dance drama. But dance can’t just happen; it has to do something. Ultimately, the audience should feel different at the end of a dance number than they felt at the beginning. Otherwise, the dance becomes redundant and, however spectacular, meaningless.

In his latest New York Times article, “Seven Ways to Dance to a Tony Award,” Alastair McCaulay begins, “The choreography of seven new Broadway musicals I’ve recently seen falls into the category of ‘good generic.’ In each case — efficiently, pleasingly, vividly — it’s taken me somewhere I’ve been before.”

Spectacular dancing is entertaining, sure. But when the dance isn’t critical to a show’s plot, choreography is not taken as seriously as the dramatic acting and vocal virtuosity that carry the show. This trend is sadly evident in the fact that the Tony for Best Choreography speech has been cut from the live broadcast of the award show. Yes, time is constrained. However, when home viewers get to watch producers, actors or directors take a few minutes at the mic, dance becomes an afterthought.