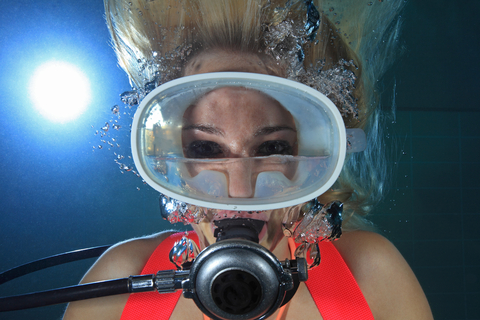 By Paul Henderson for Dance Informa.

I used to scuba dive a lot when I was in college.  When I learned to dive, since it’s possible to actually die if you do it wrong, we had a saying.  “Plan your dive.  Dive your plan.”  It meant that before you get in the water, know exactly where you’re going, how deep you’re going for how long and where you will surface…among other things.

A couple of years ago, after not diving for over a decade, a buddy and I went for a dive in Cabo San Lucas.  It was to be a simple dive to a depth of 70 feet where we would descend against an underwater cliff, scoot along the sandy ocean floor about 400 meters to explore another rocky area and then surface.  Before we hopped in the rickety old water taxi, our guide, in very poor English, explained that we should not touch the sand with our hands because of some sort of danger that lurked there.  My dive buddy and I, along with our guide, hopped into the barely floating vessel, rode out to the site, donned our gear, jumped in and started descending…our guide leading the way.

When we hit the bottom of the ocean, which happened to be right near the Arch at Land’s End, our guide proceeded to swim swiftly along the bottom toward a giant rock that we couldn’t actually see.  My dive buddy and I quickly ran into trouble.  Our dive spot happened to be right where the Pacific Ocean meets the Sea of Cortez.   It was rough down there.  It was like swimming into invisible waves.  The surge would rhythmically pull us away from our destination and then push us toward our destination.  The problem was that since the dive master had told us not to put our hands in the sand, we couldn’t stop ourselves and had to kick furiously to keep from going backwards.  Further exacerbating the problem was that neither of us had used the “kicking with fins” leg muscles in so long that it caused our heart rates to sky-rocket and our breathing became deep and rapid.

Meanwhile, the dive master, who had told us not to put our hands in the sand, would jam his hands and the tips of his fins into the sand every time the surge wanted to pull him backwards.  Once the surge reversed, he would kick merrily away from us at warp speed, barely breathing at all.

Communication underwater is not easy, especially when you haven’t done it in a decade.  After 10 minutes of surging back and forth I grabbed my buddy’s fin, shook it until he looked at me and pointed to my air gauge.  Despite only being underwater for 25 minutes I only had 1000 psi left in my tank – 1/3 of what I started with.  At the rate I was breathing, that would only last another 10 minutes.  Normally, this would be when surfacing started.  He looked at it.  He looked at his gauge, which also said 1000 psi (pounds per square inch).  He looked at the dive master swimming away from us.  I pointed at the dive master and indicated we should try to catch him, which we did.  I yanked on the dive master’s fin and held up one finger in front of his mask.  He held up the OK sign and swam away.

I knelt on the ocean floor, wondering what to do 70 feet below the surface.  I decided that I needed to surface, but it’s a rule not to leave a dive buddy.  I swam after my buddy, caught him, passed him and caught the dive master.  I only had 400 psi now.  I tapped the dive master on the shoulder and this is where I made the biggest mistake.  When he turned around and looked at me I again pointed with one finger toward the surface.  I even pumped my hand up and down toward the sky…as if to poke at the surface.  He nodded, and again he swam away into the surge.  I was confused.  I was angry.  I was becoming worried.  I thought I had told him I needed to surface.

The mistake I made was that the signal to surface is a thumbs up motion…not a “point to the sky like an idiot” motion.  I had inadvertently told him that I had 1000 psi.  I didn’t think I had the air to chase him down again, which would have been ideal because I could have shared his air.

My buddy was down to about 400 psi also, but he was about 15 feet away from me.  I swam over to him.  I pointed up again…my eyes wide open.  I was scared.  I was about to run out of air on the bottom of the ocean.  He nodded.  I looked at my gauge…200 psi! My depth gauge read 85 feet below the surface.

I had no choice.  I started ascending.  Slowly.  My buddy started ascending too, but far away from me.  When scuba diving, ascending too fast can cause nitrogen bubbles to form in your blood.  Those bubbles can cause all sorts of problems…like decompression sickness, severe pain, death. You’re supposed to ascend at about 30-60 feet per minute, or as fast as your smallest exhaled bubbles float up to the surface.   Running out of air also causes some problems…like not being able to breathe which would force a Controlled Emergency Swimming Ascent, which is extremely uncomfortable when done correctly and if done incorrectly can cause your lungs to explode (pulmonary barotrauma) and decompression sickness just for fun.

With only 200 psi, and at the rate I was breathing, which was becoming more and more rapid with every worried breath, I wasn’t sure I was going to make it to the surface.  I tried to calm myself down.  I kicked slowly, deliberately.  At about 40 feet, it was becoming harder and harder to get the last bits of air from my tank.  I was becoming more and more worried, which made me want to breathe faster which caused me to use more and more air.  I wanted to swim up faster.  My buddy was ascending about 30 feet away from me and I knew he was nearly out of air too.  Our dive master was nowhere to be seen.

At about 20 feet I knew I would make it to the surface, but the air in my tank must have been really low, because it was like trying to breathe through a straw that had been chewed on one end.  There just wasn’t anything coming out.  I continued kicking…15 feet, 10 feet, 5 feet…surface!  I bobbed on the surface and waited for my head to explode.   I looked at my air gauge.  Less than 50 psi.  My dive buddy surfaced 30 feet away.  Our dive master surfaced a few minutes later about 100 yards away – looking confused.    I found out later he had 2000 psi left in his tank!

We had planned our dive poorly and we didn’t dive our plan.

It doesn’t matter if you have one studio with 40 dancers or 7 studios with 4,000 dancers…you still need a plan or you just might run out of air at a critical point in your season.

At our studios we have something called “The TDA Book”.  We call it “The Book” for short.

Because dance studios are typically owned by someone who is also teaching classes, it is easy for that person to become distracted at various times throughout the year.  A good office manager or studio director can help, but it’s up to the owner to plan the season and ensure the plan is carried out.

Here’s what we did.  We created a Google Doc spreadsheet and listed all of the “Events” that occur in a season.  For example, Nutcracker, Newsletter, Daddy Daughter Dance.   By the end of the exercise, we had listed 17 “Events”.

Here are some of ours:

We then added a column called Activity. For example an Event might be Nutcracker and an Activity for that event might be “Design Nutcracker Program”.  Believe it or not, we have 270 “activities” to manage the 17 events.

Next, we added a column called “Date” and entered the date that each activity needed to be completed.

We also added a column called “Responsible”.  That column indicates whose job it is to complete the task.  Even if you are your only employee, creating this spreadsheet will keep you on track.

Finally, we added a few columns for “Collaborators” since most jobs require a few people to actually carry them out.

Note, we like using Google Docs because it makes real-time sharing and collaboration very easy.

Here is a sample:

Now, here’s where it becomes very useful!  Spreadsheets can be sorted by any column.  If you sort by “Event”, you will see everything associated with a particular event.

Sort by Date and train yourself and your staff to check The Book at the beginning of each week to remind them of what tasks they need to be working on.

If you sort by “Responsible” you can view each person’s responsibilities.  This becomes unbelievably useful if/when your office manager or a key assistant needs to be replaced. 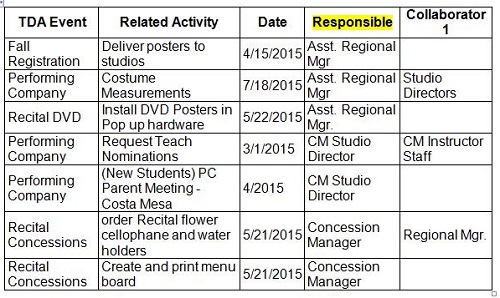 The Book is the “plan” for your studio for the entire season.

Best of all, you really only need to do it once and just change the dates each season!  Get to work on your plan today and you’ll benefit all season. 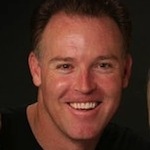 About Paul Henderson
Paul Henderson is an expert on administrative technologies for the dance industry and has been around the business for almost 30 years. His sisters were elite state champion gymnasts and dancers and his mother owned a dance studio and eventually a dancewear store. He managed the dancewear store for a few years before moving to the San Francisco Bay Area. He and his wife, Tiffany, currently own and operate Twinkle Star Dance™ – an online choreography and curriculum system for recreational dancers ages 2-11; seven successful dance studios in Northern California (www.tiffanydance.com) and one in Southern California. Tiffany’s Dance Academy’s annual enrollment of over 4,500 students caused Paul to invent ways to automate most of the day-to-day business transactions that take up so much of a studio owner/instructor’s time. Paul’s goal has always been to smooth out the business side of the dance studios so that his wife can spend more time in the studio doing what she loves…teaching. Automating online registration and monthly automatic tuition payments was achieved eight years ago but perhaps the most revolutionary invention is his web-based application – CostumeManager.com.

About CostumeManager.com
For the past six years, Paul Henderson has worked tirelessly with most of the major costume and dancewear manufacturers to consolidate their catalogs into one searchable website. Developing relationships with these companies has been crucial to the success of CostumeManager.com and his efforts have paid off for studios all across the United States and Canada. By creating one searchable website, it is possible for a studio owner to browse all catalogs simultaneously, assign items that they like to a dance class, establish their profit margin, create an online store or print a color worksheet for dancers explaining how they can order their required and or/optional items online or via toll free telephone. Dancers purchase their items securely online and CostumeManager.com orders, receives, sorts and ships the individually packaged items to the studio owner. The studio owner or instructor cashes their “commission” check, hands the bags of goods to the dancer and goes back to teaching. CostumeManager.com eliminates 90% of the work and all the worry associated with distributing costumes and dancewear to dancers while preserving all of the profit margin…if not more.