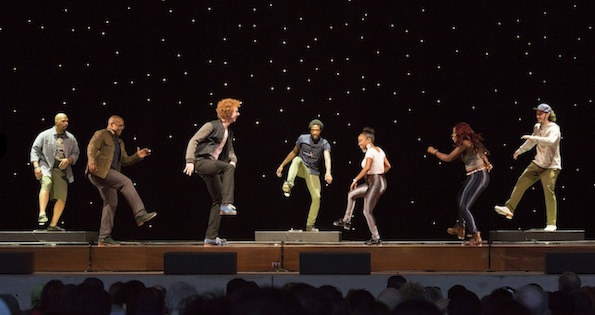 This summer, 14 lucky tap students from around the world will arrive in Chicago to participate in the Tap Scholar Award Program at the 24th Annual Rhythm World Festival. The festival is the oldest and most comprehensive for American tap and contemporary percussive arts in the world and brings hundreds of dancers to the Windy City. Hosted by the Chicago Human Rhythm Project (CHRP) on July 7-August 3, this year’s festival will be brimming with exciting performances, artist residences and educational programs.

The festival’s Tap Scholar Award Program, which was founded in 1995 to honor the life of CHRP Co-Founder Kelly Michaels, provides financial aid to talented, deserving young dancers from around the world. Students train under 25-30 internationally renowned faculty members. In the last 20 years, the program has awarded more than $225,000 in financial aid to over 200 dancers.

To be named a Tap Scholar, students have to audition first. This year, auditions were held in Tokyo, Rio De Janeiro, Zurich, Toronto and various American cities. The main audition, which is held in Chicago in February every year, coincided with CHRP’s Winter Tap Jamboree. 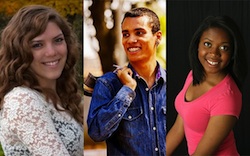 Three of this year’s Tap Scholars are: Madison Martin from Ann Arbor, Michigan; Sydney-Symone Tate from Birmingham, Alabama; and Giuliano Antonio da Silva from Rio de Janeiro, Brazil. These three, and the other 11 tappers, were selected based on “a combination of skill and financial criteria,” explained Lane Alexander, CHRP Founder and Director.

Alexander helps each Tap Scholar design a curriculum that best suits their needs. “They’re not allowed to study only those things at which they already excel or for which they have the strongest affinity. They have to be willing to do the hard work of tackling aesthetic and technical challenges as well as learning how to adapt quickly to new and different styles,” he explained.

These Tap Scholars, as well as all festival attendees, have the opportunity to study with festival faculty, including dynamos like Zada Cheeks, Star Dixon, Derek K. Grant, Jason Janas, Cartier Williams and Nicholas Young. Tap Scholar Giuliano Antonio da Silva, who has been dancing for nine years, is thankful to have this opportunity. He won his scholarship through his participation in the Brazilian tap competition Tap in Rio.

“My participation in this event will be a great experience and an example for all who dream of having their work recognized in some way… Surely participation in a big event like this will bring encouragement, motivation and recognition to my career,” he said. 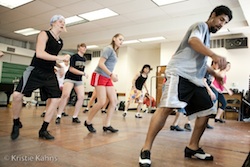 In addition to bringing back beloved festival faculty like Dianne ‘Lady Di’ Walker and Sam Weber – who Alexander said has been coming to the festival for all 24 years – there will also be special guest artists from Europe and Brazil. Tappers Guillem Alonso of Barcelona, Daniel Borak of Zurich, Victor Cuno of Paris and Charles Renato of Brazil will perform and teach.

“Each year, we focus on a different part of the world. This year, Europe and Brazil,” Alexander explained. “Several artists were chosen who represent some of the best from those regions and countries. Diverse styles and perspective are extremely important and at the heart of CHRP’s mission.”

Classes present rhythm tap, theatrical tap, experimental tap, body drumming and alternative rhythmic expression for children, adults, teachers and professionals. Tap Scholar Madison Martin, who has been tapping for 12 years, is excited to return to Chicago to take some of these classes at CHRP, who she has danced with before. Her goals are to further her “tap education, meet new people, work hard, sweat and have lots of fun.”

Martin said, “This opportunity will allow me to work with some amazingly kind and talented people who I know will help me develop my skills in tap, as well as mentor me and help me continue tapping well into the future.” 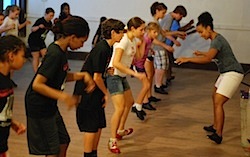 Veteran Tap Scholar Sydney-Symone Tate is excited to return to the festival to further challenge herself. She is interested in teaching tap someday and looks forward to learning more on how to teach.

“This year is all about trying new things! I’m taking class from teachers I’ve never learned from before and they teach different styles than what I’m used to. I really hope they teach me the right things to teach my future students,” Tate said.

In addition to this Tap Scholar Award Program, the festival also offers a plethora of activities, classes and events to the public. Alexander said, “Our programs run the gamut from a single masterclass to four-day courses, three-hour workshops, weeklong intensives, the Youth Tap Ensemble Conference [and] our new Institute for the Rhythmic Arts – a three-week intensive that includes more than 100 hours of personal instruction by IFTRA founder and director Nicholas Young.” 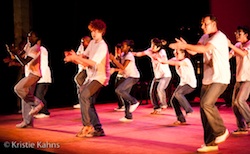 Alexander says a highlight of the 2014 festival is the guest artists from Europe and Brazil performing in three concerts at the Museum of Contemporary Art, Chicago. These performances will also feature new works by Cartier Williams and Jason Janas, and many of Chicago’s finest soloists and companies.

It’s no wonder with all these wonderful opportunities and performances that Tate danced around with her music blasting and da Silva started to cry when they found out they were 2014 Tap Scholars. Who wouldn’t be excited? Time to get those feet tappin’!

To find out more about the 24th Rhythm World Festival, the Tap Scholar Award Program, or CHRP, visit www.chicagotap.org.

Photo (top): The premiere of In the Beginning at the Jay Pritzker Pavilion during the Chicago Dancing Festival. Photo by Cheryl Mann.