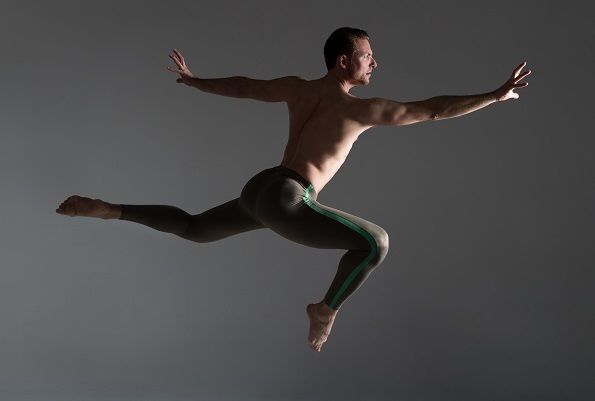 Michael Spencer Phillips embodies inspiration. As a dancer, he is disciplined, strong at heart and in the body, and passionate. As a dancer who suffered a massive injury that led doctors to believe he would never walk normally again, but who, 11 months later, returned to the stage, Phillips seems almost otherworldly. The RIOULT Dance NY member is now gearing up for the company’s 20th anniversary season at the Joyce Theater, and he says he is dancing better than ever.

During his time of recovery, Phillips pushed himself – mentally and physically – but he did it in a way that, for his nature, seemed necessary. Not once during his journey did Phillips doubt he would perform again. He accepted his situation, committed himself to full recovery and now shares his incredible story that will surely inspire all.

In October of 2012, RIOULT Dance NY was in Florida performing at the University of Florida’s Phillips Center for the Performing Arts. Phillips, who has been with the company for 12 years, was dancing in On Distant Shores, a layered and physically demanding piece for four men and one woman. During one section, Phillips took off for a jump, when he suddenly heard and felt what he says was the worst pain of his life. In that flash of a moment, several thoughts raced through his mind: “Is this the end of my career?” “How do I get off stage?” “I’m not going to be able to go on our upcoming tour to Germany.” “What is going to happen to the remainder of this piece? The rest of the program?” “Can I move?”

With movement fitting with the piece, Phillips lunged and shifted himself off stage. Another dancer threw on the costume to finish Phillips’ role, and for the company’s last work on the program, Bolero, they performed it with seven dancers instead of eight. Phillips remained on the sidelines, with a good friend and fellow company member, Marianna Tsartolia, who rubbed Phillips’ face and told him it would be okay. 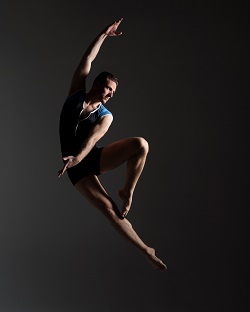 The following morning, Phillips saw an orthopedist at the University of Florida, but since he wouldn’t be Phillips’ long-term doctor, he couldn’t prescribe anything for the pain. The company flew back to NYC that day, October 26, 2012. Phillips was in a wheelchair. Friends carried him up five flights of stairs to his apartment, and he made an appointment to see Dr. David Weiss first thing after the weekend.

But then Hurricane Sandy struck. Subways were not running, people were stranded at home, and the New York University Hospital was flooded. Phillips would be unable to see his doctor or get a diagnosis for 10 days, and during this time he had to live with the immense pain.

Meanwhile, RIOULT had to prepare for the company’s German tour in two weeks. An apprentice had to go into Phillips’ parts, other dancers had to fill in any gaps, and Phillips felt terrible for the burden he felt he had left on the company.

“All you can think of is how it is affecting everyone else, wishing they weren’t having to rehearse so hard before a tour,” he says. “Touring is hard enough without having to dance new parts and partner with new partners.”

The physical pain, too, was wearing on Phillips. “I really could not move the leg or weight bear much,” he recalls. “I didn’t have much stability or strength with that leg. It was like it wasn’t mine. I couldn’t really control it, and it was so painful to stand, sit, you name it. It hurt.”

Finally, he was able to see Dr. Weiss, who saw the immense bruising to the leg, hip and abdomen and said it was unlike anything he had seen before. After x-rays and an MRI, the injury was diagnosed: Phillips had torn the adductor from his pelvic bone. The adductor was intact, but with it came some of the bone, and together they retracted down the inside of his leg and left a hole in his pelvic bone. Phillips had also torn the labrum and had micro-tears and strains to the abdominus rectus and the fascial tissue of the abdominals.

Weiss consulted with other doctors, but none had seen another dancer who had suffered that severe of a hip injury. Due to the amount of time that had lapsed since the injury, Phillips had to face the possibility that surgeons would not be able to get to the adductor and the chance he may never be able to walk normally again.

“It scared the heck out of me,” Phillips admits. “I know that with any surgery there are risks. As a dancer, these seemed like big ones, though. I had so many things that went wrong at the same time that we had no idea if surgery was going to be successful.” 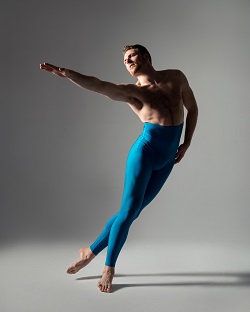 Weiss recommended Phillips go see Dr. Srino Bharam, a hip specialist who trained under one of the best hip doctors in the country. Dr. Bharam suggested surgery as soon as possible. He would repair the labral tear, remove the scar tissue from around the adductor, and pull and reattach the adductor with screws and a small plate to the broken pelvic bone. Dr. Bharam would also execute bone resurfacing, a slightly controversial technique that would essentially reshape the head of the femur and the socket of the pelvis where it sits. With the shapes of his bones slightly changed, Phillips would have to re-teach his body how those bones moved in the most efficient way. But for Phillips, the advantages of movement potential outweighed what would be a taxing recovery period.

Phillips went in for surgery on December 5, 2012. What was supposed to be a two-hour procedure took seven hours. But it was successful.

Only 12 hours later, Phillips began the recovery process. He started movement therapy with a controlled passive movement machine, a large contraption that held and helped bend and straighten his leg. He also iced for an hour every other hour for the first five days, after which he began post-surgery physical therapy (PT) with Rocky Bornstein at Westside Dance Physical Therapy.

On that first day of PT, just days after Phillips’ leg was essentially opened up and reattached, he was on a stationary bike.

“I kind of rode the bike with a rhythm of a limp at first,” Phillips says. “I only lasted about four minutes on it, but then I realized that it was all going to work out. I would be back and stronger than ever. It would be painful, it would be challenging, but it would be the most dramatic, life-changing and character-building experience of my entire life.”

For four months, Phillips’ PT routine was about six to eight hours a day. During the first eight weeks, he used crutches to get to and from PT and the gym, where he biked, swam (upper body only), walked, used the treadmill, did Pilates, used weights, TheraBands, silks, balance boards, and did hundreds of exercises for every part of the leg and core.

Soon, he started doing ballet barre in the pool, then he did barre outside the pool, and soon enough, in April of 2013, Phillips went back to ballet class with his teacher, Christine Wright.

“I would do a little more each day,” he says. “If there were exercises I couldn’t do yet, I would learn the exercise and do just the port de bras and visualize myself doing it. Once I could move more, but still not jump or shift weight well, I would try and do the combinations small in the back.”

By summer, Phillips was dancing more and more. On September 16, 2013, he returned to rehearsal. By the middle of October, he performed again for the first time! He started with only one piece and added on more repertory slowly. And now, Phillips is back dancing in almost everything he was before!

Now, Phillips will join RIOULT in the company’s 20th anniversary season at the Joyce from June 17-22. “I am featured in some of the work this season,” he says. “It is a huge honor. I’m just so grateful to be a part of it and to be back home on stage with my dance family.”

Perhaps the key to Phillips’ incredibly quick return to the stage was his attitude. Never once did he ask, “Why me?” Instead, he accepted his fate and reacted with resilience and determination.

“I spoke to a panel of doctors at the University of Michigan in April of 2013,” he recalls. “They told me about athletes who were still rehashing what had happened six and eight months after an injury. They were still doing their PT but weren’t recovering quickly, and these athletes were more than 15 years younger than me. I never did the asking of the questions after that first week. It didn’t matter. The only thing that mattered was getting back in the studio and back on stage. That’s where I feel I belong.”

“Six months after my surgery, I was already dancing in class,” Phillips continues. “Eight months after surgery, I was teaching and choreographing. Those athletes were still asking, ‘Why?’ Ten months, back to work full-time and putting in six-hour days of dancing. Eleven months, back to performing. Now, back to back. Dancing more efficiently and smarter and cleaner and with more passion and love for it than ever before. It is fleeting. We cannot be performers forever, but we are dancers. If anyone is going to push it to the limits, it will be us. No one has the discipline of dancers. No one. I believe that.”