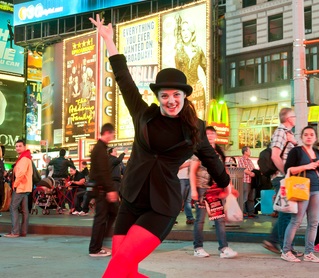 For many dancers, the ultimate dream is gracing the stage of the “Great White Way”—Broadway, that is! Dance Informa sat down with dancers (both rookies and Broadway veterans) who are currently performing on Broadway to hear about their debut experiences and what it really takes to make it in musical theatre. Here two of the dancers share their insights and advice:

“My first Broadway show was Catch Me If You Can.”

“The dance portion of the audition was incredibly fun not only because of the choreographer, Jerry Mitchell, but also because of the talent that surrounded me in the room. It was a portion of ‘Don’t Break the Rules.’ A few kicks, a few fedora hat moves, and a lot of sass! It was such a fun combination that luckily played to my strengths. I remember doing a Charleston-like step with a big battement to the front. Jerry kept giving everyone the note to ‘really lean back!’ When it was my turn to step up and audition I remembered what he had said. I leaned so far back that I fell right on my butt! I was so embarrassed and at the time figured it cost me the audition, but Jerry said, ‘Well, you really listened to me!'” 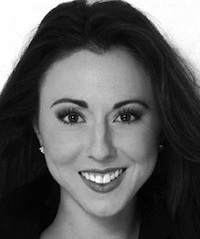 “Working on Broadway is naturally a much bigger scale of a show than any of the regional or tour opportunities I’ve had. And, of course, you get to live at home—and being that my family lives in Jersey, that’s another perk to being on Broadway! [With] my work ethic and thrill to be performing and doing what I love, it doesn’t matter what city I’m in! It’s still a show, with singing and dancing, being shown to a new audience every night!”

“I’ve been dancing since I was two years old. I attended Gallery of Dance until I was 17 and took part in all those dance competitions, recitals and galas. I also went to a performing arts high school (Freehold Regional Fine and Performing Arts Center). I did numerous community theater musicals, took voice lessons and managed to come to the city a few times a week for dance classes (living a bus ride away was a big plus!) I enjoyed taking class at places like Broadway Dance Center and Steps where I was among professional working dancers and actors. It really pushed me and helped me to see the caliber of talent needed to pursue this career.”

“I’ve wanted to be a performer for as long as I can remember. I’ve never imagined being anything else. It is who I am. I wanted to dance and sing my whole life. My mentors have shaped who I am and I am grateful everyday that I get to do what I truly love.”

“Don’t give up. This business will knock you down. It takes a thick skin to stick it out and deal with all the rejection. The hard work and persistence pays off. I always say nine times out of 10 you won’t get the job. So you have to love waking up and doing this every day: doing the work, taking class, going to countless auditions, and putting on the lashes! Auditioning is the vocation. The gig is the vacation. Put in the effort, and be easy to work with. That’s what people want.” 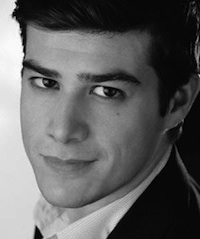 Nick Spangler (The Book of Mormon)

“My first Broadway show was The Book of Mormon.”

“They were already two weeks into rehearsal when they realized they needed a swing to cover eight of the Mormon roles. I auditioned on a Monday, had a callback on Tuesday, a final callback on Wednesday and Thursday morning I was in rehearsal at 9 a.m. It was the biggest and fastest change I’ve ever experienced in my life!

For my first audition, I just had to sing for the casting director. They needed someone to sing a high B-natural, so the purpose of the audition was just to sing as high as you could. The callback was where we had to dance. There were 16 guys all auditioning for one role. First we learned a bit of a jazz combo. It was a part of the show where the Mormons are kind of like pop backup dancers so it had really sharp movement with a lot of important “picture” moments. It was basic stuff, but the majority of us were singer/actors so we all did our best. Fortunately, our level of dance experience was all pretty even.

Next, we had to learn a tap routine because there’s one number in the show where suddenly all the guys start tapping out of nowhere. This was where I felt really comfortable in the audition. I specifically remember the moment of the audition where I was able to let go of just focusing on the steps and actually perform the combination. They actually got very specific with the arms and the head focuses and I was relieved to be able to focus on these details rather than just on my tap sounds. When we did the combination in groups of three for the director/choreographer I was able to genuinely smile a big ‘Mormon-boy’ smile as I did it.

After we danced, they asked four out of the 16 of us to stay and sing a little bit. Then for the final callback the four of us returned to sing material from the show and read some sides as well. I got the job that time around, but a few months later when the show needed someone new another guy from that final-four was the one who was cast! Always make your best impression, because you want them to remember you down the road!”

“Working on Broadway is pretty overwhelming at first, but after you get the hang of it, it just becomes your daily job. There was a time when I was really freaking out over covering eight different roles. I kept thinking I was going to get fired for not being able to keep track of it all, but then after one stint where I performed six different roles in a span of nine days I figured I had a pretty good handle on it.

As far as job security goes, I feel very lucky. The Book of Mormon turned out to be a major hit, so I know that as long as I want to stay in the show I’ll have a job. This is unlike a lot of shows that open and you don’t know if they’ll be well received or not. Some shows seem destined to succeed but then surprisingly only run a matter of months. It usually isn’t until after a few solid months of audiences that the cast relaxes and settles in for a healthy run. This is so different from other gigs because you usually go into those with a specific start date and end date.

Working on Broadway is also very surreal. If you’ve dreamed of performing in New York from a single-digit age (as I did) then finally arriving is really out of this world. Taking the subway to midtown and walking into my Broadway theater never gets old! There’s an outrageous number of aspiring Broadway performers, so I count myself one of the lucky ones and I try not to take it for granted. An added bonus is that our theater is across the street from St. Malachy’s, which is ‘The Actors’ Chapel.’ On Saturday nights at ‘half-hour’, which is 7:30 p.m., the bells of the church play ‘There’s No Business Like Show Business’ and we can hear it from our dressing room. That’s a pretty cool way to start work.”

“As far as my dance training goes, I wish I’d had more when I was younger. I did take dance classes as a kid, but really only a bare minimum. I took tap and jazz and only a few ballet classes. When I hit junior high and high school, I pretty much stopped going to class because I was involved with after-school sports (wrestling and cross country) as well as doing community theater productions of musicals. The choreography in the musicals was good training as well, but didn’t do much to help my technique. My dance training didn’t pick back up until college. I went to the musical theater program at New York University and we had dance for three hours each morning for three days a week. Even that doesn’t seem like much! It was the classic tap, jazz and ballet there. It was good training for Broadway-style dance, but we didn’t branch out much.”

“My inspiration to become a Broadway performer didn’t come in one sudden flash. Performing was just something I always did as a kid. I started in a community theater production of The Wizard of Oz when I was five years old. As a member of The Lollipop Guild, I thought the experience was amazing and I never stopped doing theater after that. Eventually it was just such a central part of my life that by the time I was in 7th grade I knew I wanted to go to college in New York City and some day be on Broadway. It’s literally been a dream come true!”

“If I had any advice for an aspiring Broadway performer it would be this: LEARN as much as you can, especially while you’re young!  Don’t ever stop taking classes. Even if something feels repetitive or below your experience level, KEEP GOING to class. People say it takes 10,000 hours of practice to become an expert at something. That means if you start dancing at age 8 it would take you 20 hours of class EVERY WEEK for TEN YEARS to become an ‘expert!’ Now, of course, that’s impossible to accomplish, but you get my point! Practice, practice, practice!

But also, make sure you’re well rounded. To get on Broadway every little skill that you have can count. You never know what you’ll be called upon to do! This means you should learn EVERYTHING that you can. This includes tumbling, juggling, singing, acting, playing a musical instrument, accents and dialects, different languages, stage combat, improvisation, the list goes on and on! All I can say is LEARN while you’re young and it will pay of big time when you get to the Big City!”

To hear from dancers Brittany Marcin Maschmeyer (Bullets Over Broadway) and Brandt Martinez (Aladdin) check out last edition’s Making it On Broadway feature.