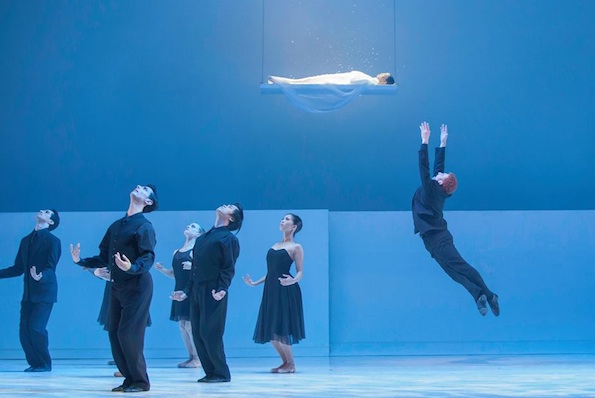 Atlanta Ballet’s talented troupe of dancers presented Stephen Mills’ Hamlet, to the music of Philip Glass performed by the Atlanta Ballet Orchestra. A very ambitious ballet, the show was entertaining with some stunning, eye-catching and memorable moments.

Hamlet is such a complex Shakespearean play and to translate it into a ballet was a huge undertaking by Mills. It is actually Shakespeare’s longest play! To tell such an intricate and long story without words was difficult and if I hadn’t already known the plot I think I would have been very lost. The story seemed quite rushed and confusing. 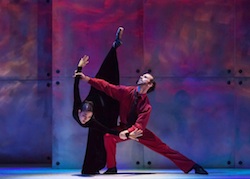 That said, the dancing was lovely and Atlanta Ballet once again showed why they are one of the country’s leading companies. Tara Lee as Ophelia was exquisite, as always, and Rachel Van Buskirk as Gertrude showed strong technique and poise. John Welker as Hamlet and Jonah Hooper as Claudius gave solid performances and Heath Gill as Laertes was commanding and dynamic.

There were a few trips, stumbles and moments of clunky partnering that made me wonder if the rehearsal period had been a little rushed. Only two weeks before the company had been performing in Modern Choreographic Voices and it seemed as if more time was needed to solidify this work and get comfortable with the stage and props.

Three large see-through cylinders lined the stage that the dancers performed in from time to time. Although these looked effective, they didn’t seem large enough for the choreography performed inside them as the movements seemed squashed and stunted. Either these set pieces needed to be larger or the choreography modified. The cylinders did seem to be a hindrance on the stage, as dancers tripped on the steps leading up to them at least twice. 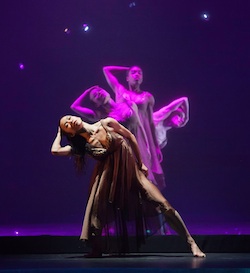 The standout moment of the show was Ophelia’s Dream performed by Lee with Yoomi Kim, Jackie Nash and Kiara Fedler. Lee splashed about, dancing in real water downstage, as the three ladies danced and floated about upstage with glitter falling from the sky. The scrim shone pink, Lee left stage and then a projection of her swimming and ultimately drowning appeared. This was stunning! My only complaint is that Lee’s dancing in the water didn’t last long enough. The splashing of real water was so unexpected and transporting for the audience, but too fleeting. The opening to Act II was also beautiful with the stage lined in ribbons of petals that were slowly pulled into the wings. Mills knows how to take our breath away!

Mills created an engaging and visually appealing ballet of Hamlet with some clever partnering and fetching lines, but there was altogether too much story to tell in too little time. There were so many breathtaking moments that were too short for my liking and then a lot of running about to hurriedly continue the story. I felt as if John Welker didn’t get to dance enough as Hamlet, which was disappointing considering his talent.