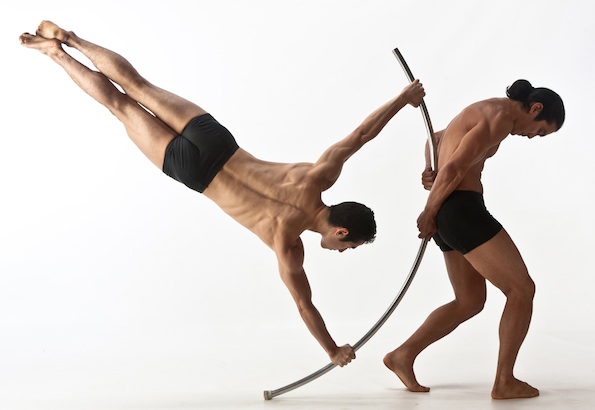 As world-renowned Pilobolus is not really a “normal” dance company, it’s expected that they wouldn’t really produce a “normal” show. Yet, even expecting the unexpected, I was still surprised with the diversity of Pilobolus’ recent mixed bill in its one-night return performance to Atlanta’s Ferst Center.

Pilobolus, which presented five works total, started off with the 2012 work Automaton. This was by far the most choreographically compelling work of the evening. Produced in collaboration with celebrated Flemish-Moroccan choreographer Sidi Larbi Cherkaoui, Automaton questions the differences between human and machine through robotic movement that transforms into soft, more fluid movement.

Through the use of mirrors, the work takes on a meditative and contemplative nature as the robots melt into softened, sensuous creatures who seek to understand their reflection in the mirror and connect with other creatures around them. As the dancers leave their robotic trances, they shed their clothes and begin intimate duets void of their previous jerky movement. One image that stuck out was dancers using a flexed foot here and there to hook themselves to another dancer. The piece ends with the six dancers slowly falling in a circle, each supporting and supported by another dancer.

After performing this contemporary dance work, Pilobolus showcased a short excerpt from one of its larger touring shows called Shadowland. While it was cute and promoted one of the company’s most well known talents, it was anti-climatic and somewhat unnecessary. But then again, who doesn’t like shadow play and guessing what’s really going on behind the screen? 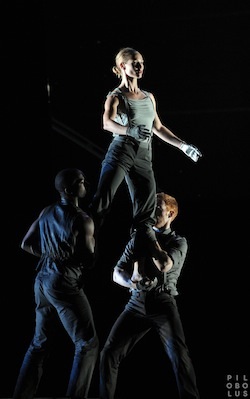 Pilobolus in ‘Automaton.’ Photo courtesy of Pilobolus and Ferst Center for the Arts.

Following this shadow play, the company highlighted another one of its strengths (literally!) with the 1972 quartet Ocellus, choreographed by Robby Barnett, Lee Harris, Moses Pendleton and Jonathan Wolken. Ocellus is basically a contemporary dance made up of four mostly naked, muscly men lifting one another and balancing on one another. A cross between bodybuilding and gymnastics, this piece would fit right into any circus show.

However, perhaps the strangest work of all five, was [esc], a full company piece created in collaboration with master magicians Penn & Teller. It’s basically a magic show that perfectly emphasizes each dancer’s physical forte. One dancer is bound in a bag and locked in a small crate, and yet he not only escapes but even changes into another on-stage dancer’s clothes. Another dancer has his feet and wrists tied together extensively and is stuffed into a travel-size duffel bag. And still, he not only breaks himself out but he somehow changes into pajamas as well!

The two oddest magic acts are performed by dancer Jordan Kriston and dancers Shawn Fitzgerald Ahern and Matt del Rosario. Kriston is bound to a chair by duct tape and has a bag (with limited air supply) tied around her head. She breaks free within about a minute. Ahern and Rosario are stripped down to only thongs and are tied together by chains to a pole, where they proceed to perform a weird pole dance routine that eventually frees them from their chains. (Ironic, to say the least.)

The Ferst Center’s press release explains [esc] as a work that “explores ideas of fantasy, athleticism and escape,” but it doesn’t really “explore” them as much as it exploits them. This was the most “commercial” work of the evening and didn’t mesh very well with the other works.

Finally, the evening concluded with last season’s new company work, Licks. While physically charged (how could it not be with thick, battling ropes flying through the air?), it lacks any real substance. Set to the beats of pop techno-rock jams, it moves along with energy and vigor. Yet, it still only offers brief moments of wit and ingenuity. There is a lot of potential for this piece to be reworked, so my hope is that the company will add, or simply change, a few sections of this otherwise fun and fascinating work. I’d love to see the idea of the ropes as lassos be re-investigated.

Altogether, Pilobolus’ recent performance at the Ferst was entertaining and inspiring, but it just wasn’t fully artistically realized. When curating the show it was obvious the directors had the non-dance patronage in mind, believing that mixing in as many diverse repertoire items as possible would probably be best. I hope next time they don’t play it safe and instead choose the quality works over the safe ones. The night was framed with two higher-quality works but filled in between with fleeting pieces and little substance.

Photo (top): Photo courtesy of Pilobolus and Ferst Center for the Arts.