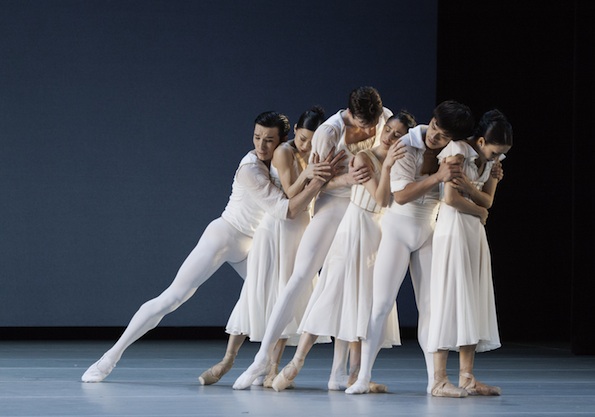 Swinging from one extreme to another, Atlanta Ballet presented three works in its spring production of Modern Choreographic Voices. Shifting from a clean, neoclassical ballet, to a contemporary ballet with intriguing storylines and nebulous character roles, to a loose, bold and nearly uncouth Gaga work, the program slowly moved from one corner of contemporary dance to another, leaving audiences mesmerized.

Starting the program, Atlanta Ballet excitingly presented Seven Sonatas, a chamber work by American Ballet Theatre artist-in-residence Alexei Ratmansky. The company was the first outside of ABT to perform this work, even though it was premiered nearly five years ago.

This quiet and elegant work found pianist Barbara Bilach on stage playing a gorgeous score by Domenico Scarletti. She was complemented by six dancers who flooded the stage with smooth, regal subtly. 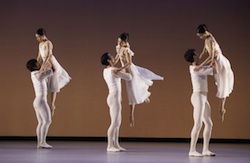 Ratmansky, who created Seven Sonatas shortly after departing from his role as artistic director of the Bolshoi Ballet, choreographed delicate partner work and soft extensions and suspensions. After introducing the six dancers in an ensemble piece, he separated them into three pairs who each performed a unique pas de deux.

The first couple presented tenderness, with Tara Lee bringing a natural ease and Brandon Nguyen bringing a focused passion to the movement. The second couple, Rachel Van Buskirk and Jared Tan, showcased vitality through quick and cutesy footwork. Buskirk shined in her solo filled with fast, tight turns and Tan really debuted his technical prowess in his jump-packed combination. The third couple, perhaps my favorite, was the light and silky Nadia Mara and strong and charming Christian Clark. Mara showcased her amazing extension and buoyancy, while Clark’s attentiveness to detail proved to be his major strength.

This abstract chamber work was complemented finely by Holly Hynes’ ethereal white costumes, which stood out against the background’s constantly changing colors. While high lifts and jumps were choreographed sparingly, highlighting the restrained and formal nature of the work, this work beautifully illuminated the dancer’s lines and the music’s accents and cadences. 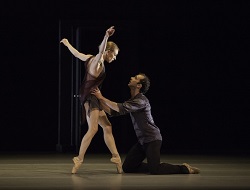 Tara Lee’s premier work The Authors, on the other hand, was less about musicality than it was an idea. It brought the audience into a fascinating game of five characters – the player, the mirror, the enemy, the children and the guardians.

As Lee’s eighth work since she began to choreograph in 2003, the veteran Atlanta Ballet dancer has officially emerged as an exciting choreographer with a strong voice. In this work, Lee brilliantly wove dancers’ individual strengths into a tapestry of memorizing musical rhythms, projected video footage and sound clips.

Like the calligraphy projected onto the upper half of the stage’s backdrop, her choreography dipped and spun, traced and pressed, looped and lunged. She used black doors on wheels to serve as entrances, passages and even barriers. The work’s main character – “the player,” danced by the exquisite John Welker – paired and fought with the other characters interchangeably. A thematically deep and surreal work, it mutually fascinated and complexed viewers as it is almost weighed down by all the embedded symbolism.

The one thing that became clear at the end is that we are the authors of our own lives, writing a letter to history. Fate, faith and destiny all have hands in it, but we make choices. We are encouraged to “remember” and take a step back to really see larger truths about ourselves, our work and our relationships. 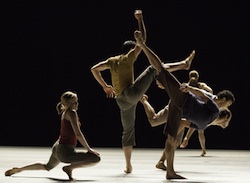 Closing the program was Israeli choreographer Ohad Naharin’s Secus. Watching this work after Seven Sonatas and even The Authors was as shocking as going from Beethoven to Marilyn Manson while listening to your iPod on shuffle. And you could feel the shock from even some of the most seasoned theatergoers. Yet, the work was stylish, hip and entrancing, overcoming the painful and assaulting moments interlaced into the improv-inspired choreography.

Set by Danielle Agami, the 16-dancer work was the second in a series of three Naharin works Atlanta Ballet has taken on as part of a three-year contract with the choreographer. [The first was Minus 16, a crowd hit.] Secus was a mash-up of improvised madness, set choreographic “assignments” and gestural pairings. The harshly lit stage literally burst with activity, peaking in a chaotic frenzy set to beats from electronica music.

While there were many beautiful moments, including a potent duet between Nadia Mara and Alexandre Barros, the systemic and assaulting sequence near the end was perhaps the most memorable. The dancers lined up into three ranks, taking turns coming to the front and exposing some part of their body. While silly and mischievous, there was also a sense that they were aggressively telling the audience off, like teenagers giving their parents “the finger.”

Between Naharin’s nearly-overpowering extreme and Ratmansky’s classical subtly, Atlanta Ballet showcased its two choreographic faces in this program, finding a nice bridge with Lee’s The Authors. I hope the company continues to showcase and explore both its faces as the dance sphere continues to grow even more varied in the ever-changing, interconnected world.