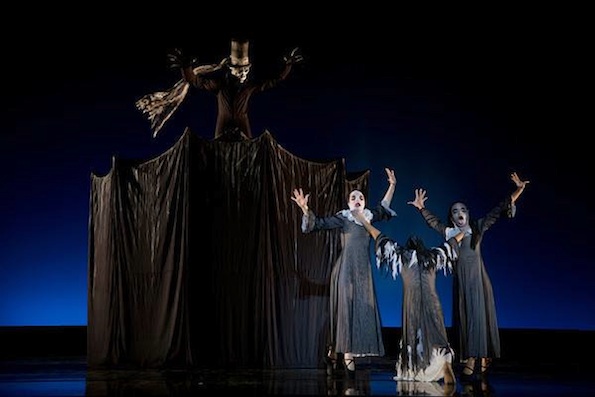 Just as springtime was rolling into Atlanta, Trey McIntyre Project came to town as part of the company’s farewell tour. However, unlike the flowers that were just blossoming and the trees which were just blooming, this company was not budding, it was admittedly on its way out. It was in the midst of it’s own autumn, if you will.

Earlier this year, the company announced that it would be “transitioning” into something new and would no longer be purely a dance company presenting the choreography of its brave and brilliant founder/choreographer Trey McIntyre. This came largely as a shock to the dance world as the company was still in its prime, and its leader was still young and producing original and highly-praised work. The ensemble was founded 10 years ago, only becoming a full-time touring company in 2008.

In its Atlanta performance, Trey McIntyre Project looked as strong as ever too, making the news that much harder to understand. Each dancer was a technical powerhouse, brimming with personality and character (unlike many large companies today that either neglect individuality or flaunt it too arrogantly), and had athleticism and poise. And, as expected, the choreography jumped right off the stage, with the audience clapping in time at the end of the second work, Mercury Half-Life. It felt like this company had many more years in it, so it will be sad to see the close-knit group of gorgeous and vigorous dancers disperse.

Quite interestingly, McIntyre’s last premiere for the company was a creepy and dark 30-minute work inspired by writer and illustrator Edward Gorey’s The Gashlycrumb Tinies, a morbid book filled with tales of 26 children dying, all in alphabetical order and in rhymes. Some have been making a play on words, saying this is a “Gorey end” for the company – and they’re not far off. In addition to contrasting against most of the company’s other works, it doesn’t have the same magic many of McIntyre’s works do. There was something lacking, although it was hard to pin it down.

Titled The Vinegar Works: Four Dances of Moral Instruction, the work started with a solo set to a reading of the rhyme “A is for Amy who fell down the stairs. B is for Basil assaulted by bears…” It was a cutesy and morbid opening that was performed by one of the main stars of the evening, the outstanding Brett Perry. The work then dived into four chapters of melancholy, murder, possession and obsession. Audiences witnessed many strange and eerie things: a fat and demonic “beastly” baby (who was actually quite comical) scared his sitters before being carried away by a crow; three deranged cousins switched off between fighting, drinking, killing and mourning; a nun figure went crazy and started scaring her sisters; a young woman got seduced and then possessed; and a little boy make friends with a tall puppet resembling death.

Many elements of this work reminded me of dark and twisted versions of other stories and ballets. The oversized puppet leading the little boy around the stage through the various stories reminded me of a morbid version of the Ghost of Christmas Past. Later when the same puppet’s long skirt widened to resemble a hoop skirt, I was reminded of Mother Ginger from The Nutcracker. Just like her gingerbread children who come tumbling out, three men came out in thick fur coats resembling Uncle Fester from The Addams Family. 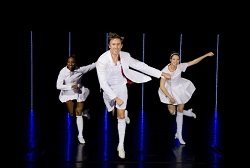 The highlight of The Vinegar Works for me was the gothic and grayscale costumes by Bruce Bui. Combined with the eerie score by Dmitri Shostakovich and the inventive props and puppets designed by Dan Luce and Michael Curry (the well-known Lion King puppeteer), the fearsome wonder and terror a child feels while reading Gorey’s tales came to life. However, McIntyre’s clean, balletic choreography did feel slightly displaced at times, not meshing with the quirky and sinister undercurrents of the work. Perhaps if he had played more upon the use of pantomime, or on the other hand, abstracted the narrative altogether and lost some of the obvious symmetry, the choreography would have better suited the grisly theme. The movement just felt too tidy and pure for such a dark topic.

After intermission, audiences got to see the side of Trey McIntyre Project that has made the ensemble so popular. Mercury Half-Life presented 50 minutes of exuberant and electric dance set to excerpts of 15 Queen songs. Combined with beloved rock classics like “We Are the Champions” and “Bohemian Rhapsody,” the ensemble stylishly tapped, spun, jumped, kicked and leaped with a hip vibe balancing complete abandon with controlled momentum.

Two sections that particularly stood out, although all were equally charming, were “Under Pressure” and “Another One Bites the Dust.” Chanel DaSilva was a standout, with her shorter frame bounding through the air with precision and self-assurance. Her duets with Perry (who also showed off his range of talent with an impressive tap solo) were lovely and energetic, with smiles here, a stunning lift and catch here, and a moment of tenderness there.

The abounding energy brought to the stage by this fabulous troupe was undeniable and absolutely infectious. Showcasing the contagious vitality of Queen’s music, which is always driving towards a flashy and satisfying crescendo, the dancers moved at full volume, just as you would expect Queen to perform at their own concert. Rachel Sherak brought a certain sensuous flair to her work while Ashley Werhun’s lovely extension and balletic lines impressed. The male dancers (especially Ryan Redmond and Travis Walker) brought athletic dexterity in powerful waves of movement.

To see this wonderful company before it disperses, visit their website to see the remaining tour dates. A series of performances at Jacob’s Pillow Dance Festival in Becket, Massachusetts will be the company’s last engagement, scheduled for the end of June.

As the last performance swiftly approaches, much like the peak of autumn beauty quickly declining toward winter, Trey McIntyre Project is as compelling and evocative as ever. This spirited group of dancers will be remembered. I’m crossing my fingers that there may be a comeback – after all, each season has it’s time.