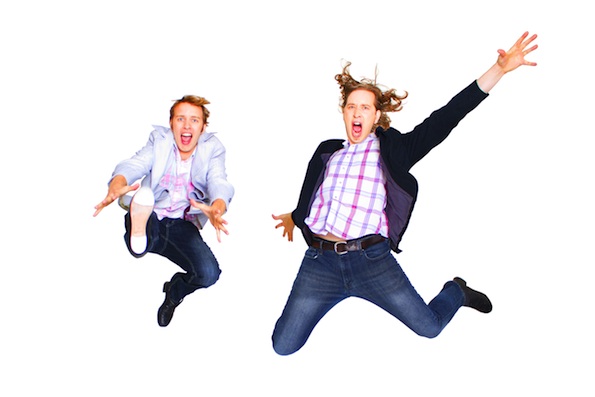 For Twin-Cities-based, multi-disciplinary performance ensemble Buckets and Tap Shoes the dividing line between music and dance is fantastically blurred. At the helm of the troupe is brothers Andy and Rick Ausland, whose enthusiasm for entertaining is as infectious as the percussive rhythms emanating from both their flying, tapping feet and hard rocking musicians.

Born and raised in south Minneapolis, the Ausland brothers attribute their dance education to Larkin Dance Studio in Maplewood, Minn. They started taking lessons at a young age, training in jazz and ballet, as well as tap.

After high school, Rick went out to Los Angeles to test the dance waters on the West Coast. He auditioned for the hit show Stomp, and though he didn’t nab a spot with the show, the experience triggered a desire in him to create something similar back in Minneapolis. 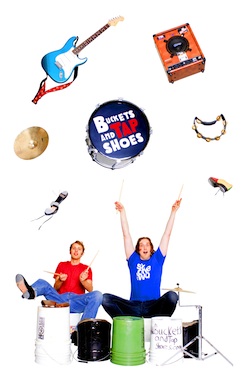 Brothers Andy and Rick Ausland drumming on buckets in 2011. Photo by Chris McDuffie.

Upon returning home, Andy and Rick assembled a group of Larkin dancers to create new work. They choreographed, and performed the pieces in dance competitions. After success on that circuit, the brothers realized they had something worth building on and, in 2004, launched Buckets and Tap Shoes, an eclectic ensemble of dancers and musicians.

In the past 10 years, Buckets and Tap Shoes has made its mark on the Minneapolis-St. Paul dance community, performing to great acclaim at multiple Minnesota Fringe Festivals and local venues like the Cowles Center—the Ausland brothers were also nominated for a Sage Award for Dance in October 2013.

And while Minnesota and the Twin Cities community is a large part of who these brothers are and what they do, it certainly doesn’t limit them, either artistically or geographically.

They’ve taken Buckets and Tap Shoes on the road, performing to packed houses at large festivals like Fall for Dance in New York City, a three-summer stint at the Vail International Dance Festival and the Spring to Dance Festival in St. Louis. They’ve also made many appearances at more intimate venues throughout the Midwest.

The two say they want to do even more traveling in the future, but would like to be in cities for more than one or two nights. Additionally, they’d love to start adding more educational and outreach components to their work while they are out on the road.

A drummer’s approach to tap dance

The Auslands come from a musical family—their father is a drummer. So, Andy says they have a “drummer’s approach to tapping,” connecting with the rhythm and percussion of the dance genre. This is evident in all of the troupe’s live performances, which integrate dance elements with bucket drumming and a group of cool cats who can get down with their instruments.

Musical inclinations shaping artistic instincts within dance reflects the future of tap dance as a whole, according to Andy. 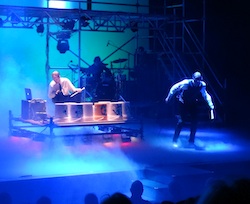 “I don’t think there’s a separation between music and tap dance,” he says when looking at the direction tap dance will take down the road. “You are always blending two forms. So, I think that’s how you can continue to push the boundaries.”

Whether this means a minimalist-purist approach or using technology to create new beats, the Ausland brothers say they are always integrating music and dance, and experimenting with both ends of the spectrum—they have taken their bucket drums to the sidewalks of the 3rd Street Promenade in Santa Monica, Calif., as well as produced large-scale productions on stages throughout the Twin Cities.

Making the audience the star

While the brothers can’t fully disclose their ideas for future shows—what would be the fun in giving away all their secrets?—they did say that breaking the fourth wall and involving the audience more directly is at the forefront of their minds. In a digital age, where social media is a dominating presence, Andy says these outlets allow everyone to be “their own star—so let’s put everybody onstage with us.”

“After coming back from New York, I realize there’s a different connection that can be had between the performer and the audience,” Rick adds. “It flips over into a communal event because the audience is no longer just an audience watching the performance, but they are now in it.”

“I realize I do like spectacle,” Rick continues. He talks animatedly about Cirque du Soleil and Sleep No More in Manhattan. These shows pull together a multitude of aspects in a grand and engaging way—Rick wants to infuse some of these successful elements into the next Buckets and Tap Shoes production. 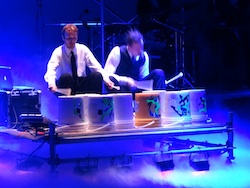 So what does this look like for the tap troupe?

The two are still figuring that out, playing with a few ideas like incorporating circus arts and structured improvisation, as well as more audience integration.

Improvised sections generate an edge of excitement and unpredictability. But Rick says the improvised elements can be controlled “to ensure certain things happen—or, like a magician, you can have a few things prepared so that, as it’s going on, you can alter the direction that it’s traveling.”

Full of ideas, both grow more and more excited as they talk about their next project. “We’re just writing the show as we’re talking,” Rick jokes mid-interview.

He adds that he and his brother are also interested in how music affects people and “how profound of an effect it has on our brain.”

Ultimately, they want to give audiences the opportunity to escape and fully immerse themselves, transcending the ordinary so they leave behind any day-to-day woes or responsibilities for a few hours. They both say they aspire to make their next production stimulating and “all encompassing,” seamlessly weaving together dance, music, theatrics and technology.