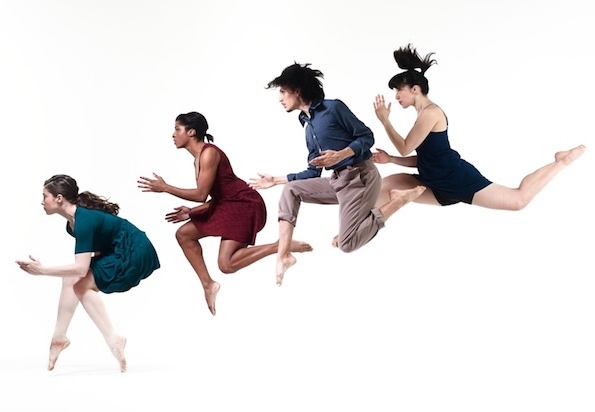 Currently in its ninth season, San Francisco-based Push Dance Company made its Atlanta debut in early February with intimate performances featuring six different works by Artistic Director and Choreographer Raissa Simpson. Six dancers, including Simpson, presented the contemporary choreography in the round, meaning audience members were seated in a circle on the Ferst stage with the dancers performing in the center.

After the performance in a post-show Q&A, Simpson shared that she tends to “focus on untold stories – things that are not covered on TV or in the media.” This certainly came through in her choreography as she delved into different, diverse topics, in one piece looking at the “survival of the fittest” instinct and in the next, her struggle with degenerative joint disease.

The evening started with the 2012 dance work In the Same Place. The lights came up to show a wiry, thin male dancer (Adriann Ramirez) reaching his limbs into the space outside his spotlight. Described as “an examination of overt feelings of forfeiture in a spatially set territory onstage,” the work was basically a set of solos performed by various dancers as to explore the idea of each individual testing and navigating their own space. It was a nice way to introduce each individual dancer.

In the next work, Configurations, a men’s trio portrayed “the obligatory nature of self-preservation during natural disaster.” It started with three men lying across one another in a heap on the floor. Slowly, one starts to awaken and stretch, looking restful before preparing to move. The dancers explained later during the Q&A that the three characters each represent different roles people play in the aftermath of natural and civic disasters – the manipulator (convincing others to give what he needs), the taker (the one who stomps on others to preserve self) and the protector (the one who sacrifices self to serve others.) The work, which was inspired by the aftermath of Hurricane Katrina, showcased some interesting moments of male partnering, but for the most part was distractedly out of sync as the dancers were frequently not in step with one another during ensemble movements. 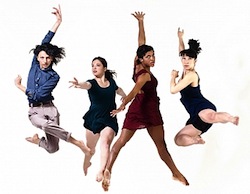 Push Dance Company, courtesy of Ferst Center for the Arts.

Yet, the real highlight of the evening was indisputably Simpson’s Bitter Melon, a longer group ensemble piece set to a mesmerizing and driving soundscape featuring music by Tori Quinn and Jose Gimen. Bitter Melon examined two separate and yet parallel times of turmoil, both involving water. It showcased how water, while a source of refreshment, life and cleansing, has also been used to inflict suffering and has been a cause of natural disaster. Simpson specifically referenced “the waterboarding of the Filipino community in the Philippine-American War (1899-1902) and the African-American community during the Great Flood of the Mississippi (1927)” in the program notes.

Bitter Melon began with a beautiful image of the six dancers in a line shoulder-to-shoulder each rolling up their spines before taking deep, audible gulps as if they were coming to the surface for air. The gasps got louder and more frantic as the moments wore on. After the dancers finally burst forth from the line, a work ensued that exemplified vast emotions – from desperation, to sadness, to hope, to assurance. Where the other works of the evening hinted at uncertainty or nervousness, this work really saw the dancers come into their own.

The program ended with the witty and humorous solo work Judgments in Milliseconds, a commentary on African-American hair in today’s culture, and excerpts from the work Black Swordsman Saga, an allegoric hip-hop opera set to the combative rapping of MC Kirby Dominant. Both works reinforced one of Push Dance Company’s general goals – to increase understanding about the experiences of people of mixed heritage.

Overall, this up-and-coming company could benefit from more rehearsals to clean and polish choreography, but Push definitely offers an unusual choreographic voice that is as physically intriguing as it is thematically diverse.