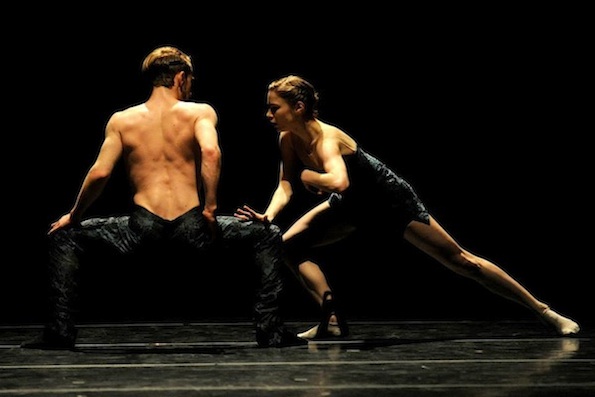 Walking up to the Rialto Center for the Arts, I was beyond elated for the Off The EDGE Biennial Dance Immersion taking place on a chilly Saturday evening last month. The last (and first) Off The EDGE was in 2012 and it left a sense of excitement and anticipation in viewers (and especially dance fans) for the possibility of more national and international dance companies touring to Atlanta.

With this year’s festival being curated by Montreal-based Ilter Ibrahimof, an artist manager and artistic advisor to, among others, the Festival des Arts de Saint-Sauveur and New York City Center’s Fall for Dance Festival, Off the EDGE seemed to not only being returning with equal vigor, but also a larger, more expansive reach.

The first evening (Friday, January 31) brought viewers Dance Heginbotham from New York, Wayne McGregor’s Random Dance from London, Compagnie Käfig from France and the local troupe Wabi Sabi supported by Atlanta Ballet. The second evening was set to re-present Dance Heginbotham and Random Dance while also newly presenting contemporary powerhouse Hubbard Street Dance Chicago, famed tapper Michelle Dorrance of New York with Atlanta vocalist Aaron Marcellus, and Kennesaw State University’s Dance Department. As the audience settled down into their seats on February 1, there was a sense of eagerness and heightened anticipation. Plus, one couldn’t help but notice that the theater, which is usually filled with white and grey-capped heads, was bubbling over with younger faces – a good sign for the arts. 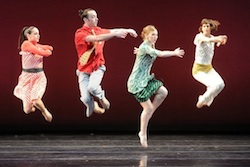 Dance Heginbotham at Off the EDGE. Photo by Jim Braverman.

The first work on the mixed bill was by Dance Heginbotham, titled Throwaway. It was a hip contemporary duet featuring two glazed-over dancers who were sharply shifting from one pose or shape to another to the rhythm of driving techno beats. With gestural movements, like a pointed finger, the two dancers interacted, one responding to the other with sudden outbursts of jumps, hip pumps and arm bends. The work showed the fun diversity of this company, but also exemplified how trends come and go in the blink of an eye as the work seemed to end just as it had begun.

The next work was by two dancers from the inventive and luscious Hubbard Street Dance Chicago. I have to admit, I was a bit disappointed to see that the company was only represented by two dancers as I was hoping for a larger ensemble work, but nevertheless, the dancers performance of Never Was by Alejandro Cerrudo was flawless. Dancers Emilie Leriche and Johnny McMillan brought gorgeous circular fluidity to their movement, with rolling torsos and gentle slides across the floor honed in by quiet lifts and interesting shadow play.

Dance Heginbotham briefly returned after this to present Waltz Ending, a formal and simplified choreographic work set to live music played by pianist Diliana Slavova. It definitely and unmistakably had the stylistic undertones and influences of choreographer Mark Morris, who company Founder and Artistic Director John Heginbotham previously danced with. The lightness of movement and the repetitiveness gave viewers time to really appreciate the work’s natural elegance. 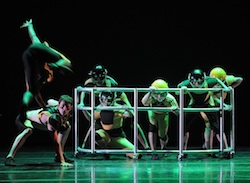 In swift contradiction to the subtlety and pleasantness of Waltz Ending was the solemnness in the excerpts of Wayne McGregor’s FAR, presented by two dancers from his company Random Dance. Dancer Louis McMiller, who is tall and muscular and seems to have limbs for days, lifted and spun partner Daniela Neugebauer with power and intentionality. Again, I wished I could have seen more from this company, but the little that was presented showcased why McGregor has become such an in-demand choreographer.

After intermission, the festival’s co-presenting organization, Kennesaw State University, had its Dance Department present a timely work entitled Touchdown by Ivan Pulinkala. Falling the night before the Super Bowl, the work looked at the aggression and physicality of football. Taking on such a hostile sport could have worked against the student dancers since it requires great force, but they attacked the movement with necessary power and agility. The metal helmet structure provided a neat and interactive prop for dancers to climb on and jump from. It’s no surprise this academic program is experiencing such success nationally with such committed, professional student dancers.

The last piece of the evening was well placed in the mixed program as it left audiences feeling energized and uplifted. New York tap sensation Michelle Dorrance joined Atlanta vocalist Aaron Marcellus and a group of other phenomenal singers to present a specially commissioned work. The soulful vocals beautifully merged with Dorrance’s rhythms and infectious joy to create a fun, exciting performance. This was truly a highlight of the evening, although I found myself still wishing to see more from Dorrance even when the piece ended. 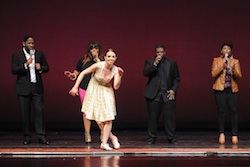 Tap dancer Michelle Dorrance, center, at Off the EDGE. Photo by Jim Braverman.

Overall, Off The EDGE once again left audiences feeling energized and hopeful for more creative possibilities coming to Atlanta. Well curated and executed, the festival definitely presented an honest look at the diverse spectrum of the current dance world (although ballet could have been more represented.)

Though, what it really boils down to is that Off The Edge is a tease – like going to a gourmet restaurant and only being offered samples of the chef’s signature plates but no full entrees. While I think all would agree that a taste is better than nothing at all, it certainly would be nice if the festival offered something a little more filling.

But alas, while I would love to enjoy a full serving of these wonderful dancers and companies, I can’t deny that a taste is delightful too. Bravo!