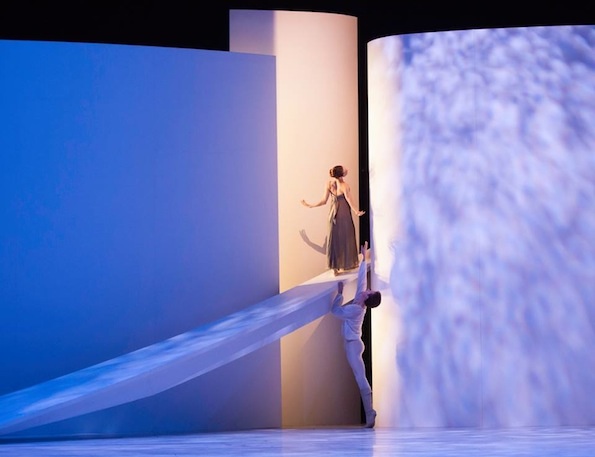 For a love story so well known to many, Romeo et Juliette was somehow able to freshly move and touch Atlanta audiences in February through French choreographer Jean-Christophe Maillot’s version presented by the capable and revitalized Atlanta Ballet. Compared to the classical productions with the epic sets, Shakespearean costumes and elaborate backdrops, Maillot’s Romeo et Juliette is stripped bare, showcasing only the emotional core of this tragedy. With the boldness and impressive energy of its recent renaissance, Atlanta Ballet took this spectacular ballet and truly made it its own.

Perhaps the biggest success of this production was not only that Atlanta Ballet beautifully achieved all the movement phrases, but that the dancers really soared in each of their individual roles. With the help of near-perfect casting, the dancers rose to the occasion not only to fully dance their roles, but to truly become their roles. In a production so familiar to theatergoers, it is expected for dancers to face heightened criticism for the portrayal of their characters and their motives. Yet, this was especially true in this minimalistic ballet since there was no “fluff” for dancers to hide behind. 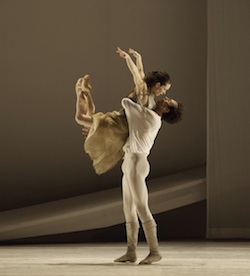 The two dancers who really shone were company veteran Christian Clark as Romeo and the lovely (and new company favorite) Alessa Rogers as Juliette. Rogers, who was pushed into the national limelight in 2012 after being chosen as the lead in Twyla Tharp’s new ballet The Princess and the Goblin, again left audiences speechless with her charming and heartfelt performances of Juliette. She brought a unique interpretation to the role of Juliette, who is often portrayed as naïve. Through her powerful and emotionally commanding performance, she created a Juliette who was at once wide-eyed but also brave and sensuous. Likewise, Clark brought a deeper, more riveting portrayal of Romeo to life. Rather than being danced as an impulsive, star-struck teenage boy, Romeo was danced as a coming-to-age young man that was warm and humble.

In the scenes that essentially make or break the entire production – the moment where Romeo and Juliette first lay eyes on one another at the ball, where they first share a private moment under her balcony, and where they collide into one another’s arms after he kills Tybalt – the chemistry between Clark and Rogers is real. Their love, which elevates quickly as originally penned by Shakespeare himself, is still believable, and as they go through the trials of forbidden love they grow up and into one another – emerging wiser and even stronger than before.

Amidst many, many beautiful moments choreographed by Maillot, one that stands out is at the end of Act I when Clark and Rogers embrace. After having just finished a wonderful pas de deux, they slowly and painstakingly pull away, holding each other’s arms until the last second. When he finally lets go of her hand, she reaches with closed eyes and a lovesick smile into the space he just encompassed. The desire is palpable. 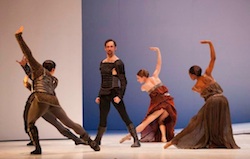 Maillot’s dependence on abstract gesture over the traditionally employed pantomime makes the story feel less theatrical, as it typically does in classical productions. His use of props is also fascinating, symbolically showing how violence leads to more violence as Romeo kills Tybalt with the blood soaked garment of recently murdered Mercutio.

The smart and expertly staged choreography by Maillot is further complimented by the exquisitely lit set by Dominique Drillot. The rich palette of yellows, purples, blues and creams are cast upon the stark and geometric stage pieces to reiterate the mood. In a powerful moment of grief just before Romeo takes his own life, a slanted white sword (or maybe it’s a cross?) is cast upon the wall.

The productions abstracted elements call to mind another contemporary version of Roméo et Juliette by another French choreographer – Joëlle Bouvier. I saw Bouvier’s ballet presented in June 2011 at Jacob’s Pillow Dance Festival by Ballet Genève. Like Maillot’s work, Bouvier’s evening-length ballet unfolds in a world that transcends a specific time or place. The dancers present the tragedy in a way that is similarly piercing yet understated.

In the end, Maillot’s Roméo et Juliette is truly a feast for the eyes, heart and mind. Atlanta Ballet’s performances bring to life the tragedy we all know to the same Sergei Prokofiev score that we all love; and yet, the story is new and transcendent as this generous and talented ensemble showcase the sweeping extremes of love and hate in one fell swoop.