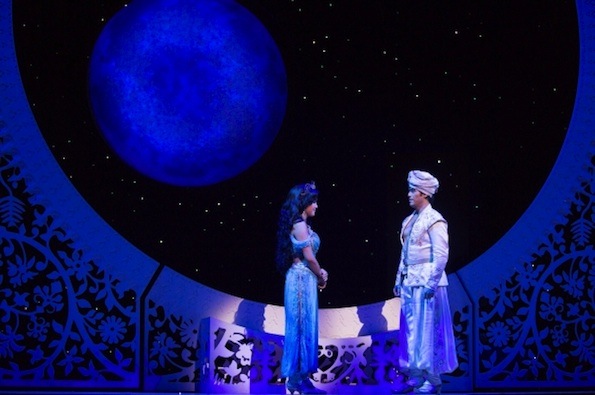 Make way for Prince Ali! Disney’s Aladdin is set to open on Broadway in February 2014. The production is currently performing a try-out run in Toronto at the Ed Mirvish Theatre.

After a steady run of Disney musicals including Mary Poppins, The Little Mermaid, Tarzan, Beauty and the Beast and, of course, The Lion King, New York City is abuzz with expectation and excitement for the upcoming Aladdin. The animated film was the number one movie of 1992 – both in the United States and the world – when it came out over two decades ago.

Director and Choreographer Casey Nicholaw (The Book of Mormon, Elf, The Drowsy Chaperone, Spamalot) brings the well-known cartoon classic to the main stage. Given Nicholaw’s background, we can look forward to a similar dynamic comedy in Aladdin as we’ve seen in his previous shows. Perhaps Aladdin will award Nicholaw with his first Tony for Best Choreography, having been nominated several times in the past. 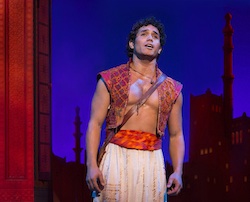 But Nicholaw’s choreography – as we’ve seen it on Broadway – has been somewhat limited to what one might consider traditional tap and theater dance. What will he bring to Aladdin, a show set in the Middle East? Will we see bellydance, Bollywood, hip-hop or maybe acrobatics? Will there be cardio-centric, “kick your face,” round-off back-handspring back-tuck dance numbers? Will Nicholaw research and implement authentic Middle Eastern dance styles such as the Raqs sharqi (classical Egyptian belly dance) and Raqs baladi (folk dance seen as festivals and weddings)? The 1992 film version of Aladdin sparked controversy surrounding the stereotypical depictions of Arabs. Now, 22 years later, how will the Broadway production address this in terms of choreography?

“People are going to want some spectacle,” says Nicholaw. “They’re going to want to see a magic carpet fly.” But in Disney’s Broadway musicals we’ve seen Tarzen soar through the jungle, Ariel “swim” in the sea and Mary Poppins ascend into the sky with her magical umbrella. I’m sure a flying magic carpet will be just the tip of the iceberg in terms of the special effects we’ll see in Aladdin. 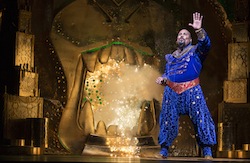 As for the cast, Adam Jacobs (Les Miserables, The Lion King) will star in the title role of Aladdin, the urban street-rat who finds a magic lamp that changes his life forever. Jacob’s co-star, Courtney Reed (In the Heights, Mamma Mia!), plays Jasmine, Aladdin’s royal love interest. James Monroe Iglehart takes on the role of Genie, originally made famous in the film with the voice of Robin Williams. Most exciting, however, is the evil villain Jafar who will be played by Jonathan Freeman (The Little Mermaid, Mary Poppins, 42nd Street, The Producers, On the Town, Beauty and the Beast) who actually voiced the character back in the 1992 film.

You can expect to see some of your favorite songs from the 1992 animated film – including a show-stopping tap number to genie’s “Friend like Me” – as well as a selection of new songs composed by Alan Menken. In fact, several songs that were cut from the original movie will come off the shelf and onto the stage.

And don’t have any worries about Disney changing up the plot as many musicals do during their adaptation from screen to stage. “It’s Aladdin as you know it,” commented Menken… but perhaps with a bit more magic – not the magic of Genie, but the magic of live theater. “I think audiences are going to be kind of dazzled,” said Menkin. And with such a knockout cast and creative team bringing this beloved film to the theater, I have no doubt that Disney will dazzle us once again.