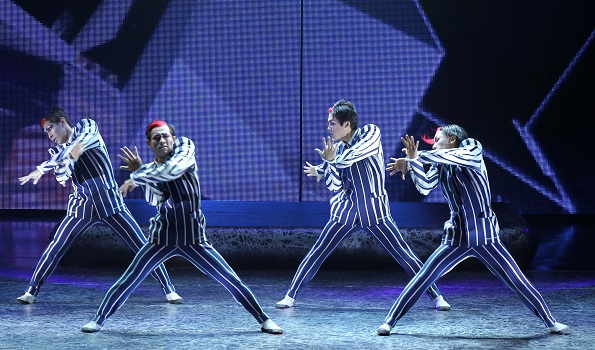 ONE voices the idea that we are all one. No matter our race, religion or background, we are all just people sharing the same planet, so we should accept and love one another; an idea that Jackson was famous for championing.

We are taken on a journey with four misfits who find their way through the chaos of fame and eventually come to personify Jackson’s characteristics of agility, playfulness, courage and love. The four fun characters celebrate Jackson along the journey with hard hitting dance and acrobatic routines, backed by Cirque’s talented team of acrobats, trampolinists, aerial artists, trapeze artists, dancers, pole dancers, musicians and singers. 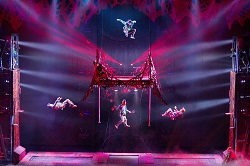 ‘Thriller’ from Michael Jackson ONE. Photo by Aaron Felske. Costumes by Zaldy Goco.

The soundtrack is a fusion of Jackson’s hits played in a well planned order to tell the story. Some songs are accompanied by footage of Jackson singing them, from back in his Jackson Five days to the height of his career. The combination of these much loved songs and Cirque was always going to be phenomenal, and ONE doesn’t disappoint, even providing a hologram of Jackson performing Man in The Mirror, with Michael materializing from a cloud of gold dust right before our eyes!

There are too many diverse acrobatic tricks and expertly used props to list, and I wouldn’t want to give too much away, but special mention must be made of two scenes: Smooth Criminal and Thriller. The marital arts style of dance performed by Cirque’s artists in pin stripe suits to Smooth Criminal is exciting. The floor is sprung and the dancers literally throw themselves onto it, bouncing and tumbling off and into the air. It is a visual spectacle and as a dancer myself, I found the idea of having such a floor inspiring; oh, the choreographic possibilities! Thriller involves footage from the original iconic music video, the famous Thriller dancing and interesting use of trampolines and walls. It really is a delightful sensory overload!

The costumes, designed by Zaldy Goco, are stunning and they pay tribute to Jackson’s unique fashion sense; Jackson was known for making fashion statements and the costumes in ONE are very unique and exciting. Fittingly, Jackson’s sequin glove plays a large role in the show.

Cirque claims that the ONE is not a tribute, but rather a reinterpretation of Jackson’s influence, infused with the acrobatics of Cirque. Whether a tribute or not, the show is outstanding and a must see for young and old, even if you’re not a huge Jackson fan. I’ve seen several Cirque shows and for me this show is definitely number one!