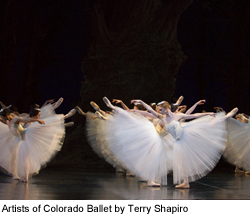 In anticipation of the 2013/2014 season, Colorado Ballet took to the Arvada Center Outdoor Amphitheater to give local dance lovers a taste of what’s to come. On a Thursday night in August, the company presented An Evening Under the Stars, a mixed bill of iconic classics and contemporary repertoire.

The evening attracted a moderate-sized crowd—though where the audience may have lacked in volume it made up in enthusiasm. After stripping away the company’s typical elaborate sets and costumes, it was refreshing to see the dancers in an intimate environment and attempt a less formal presentation of dance. It wasn’t the company at its best, however, with the unpredictability of live theater playing a major role throughout the night, but the dancers proved their professionalism and ability to carry on despite distractions.

It opened on a classical note. At first glance, things seemed smooth sailing for Colorado Ballet as Asuka Sasaki and Francisco Estevez performed the “Peasant Pas de Deux” from Act I of Giselle—Sasaki displayed long, fluid line and Estevez had a rawness to his dancing that suited the role well. From there, the evening had ups and downs.

Amy Seiwert’s Traveling Alone, performed by Adam Still, Christopher Ellis and Chandra Kuykendall, had some interesting choreographic moments, but the performance felt overly affected. In Piazzolla, choreographed by ballet mistress Lorita Travaglia, busy costumes and tango-inspired choreography brought a new flair to the night, but the ballet lacked cohesion. One highlight from the ballet was a pas de deux between Tracy Jones and Kevin Hale, a standout for the entire evening—Jones is one to keep an eye on.

Edward Liang’s Feast of the Gods, danced with technical assuredness by Kuykendall and Domenico Luciano, was choreographically the strongest piece of the night. Sharon Wehner and Still also demonstrated exceptional technique in Sandra Brown’s Set Fire to the Rain, with music by Adele of the same name. The latter appeared to be an attempt to merge mainstream culture with a classical art form, but suffered from movement that was too literal to the lyrics of the music.

Caitlin Valentine-Ellis and Viacheslav Buchkovsky tackled the demanding “Wedding Pas de Deux” from Don Quixote. The two encountered numerous bobbles along the way. But they fought to the very end, through the final 32nd fouette, and finished stronger than they started.

Nerves aren’t the only variable that comes with live theater. Dancers also have to negotiate bright lights, a live audience, costumes, new partnerships and, in the case of Thursday night, fire alarms. At intermission, a fire alarm sounded and continued to go off, prompting the Arvada Fire Department to show up. The 15-minute intermission extended to twenty-five plus minutes, as they attempted to ameliorate the situation. Artistic director Gil Boggs made an endearing speech, promising the audience that their patience would be rewarded by the final piece, Val Caniparoli’s In Pieces, which premiered in February 2013.

The dancers’ ability to rally after such interruptions, including sound malfunctions during the final ballet, was impressive. Yet, for those who saw Caniparoli’s premiere back in the spring, the added excitement couldn’t make up for some of In Pieces’ shortcomings. A plot-less ballet that exhibited shifting temperaments from dark and brooding to coy and playful, the title was fitting because the ballet felt like several pieces strung together to make a whole. It was performed well and sparked an excited response from the audience, but offered little in the way of innovation.

Nerves, fire alarms and technical difficulties, Boggs was correct—it is impossible to predict the outcome of live theater. The dancers of the Colorado Ballet rose above the difficulties, showing high levels of professionalism and ensuring fans’ appetite for ballet was satiated. On that level, the evening was a success.